In "The Minor Chords Are Ours", Dario Robleto returns to a material essential to his earlier work: the vinyl record. Stripped of specific reference to performers, the album covers and other ephemera are reworked into encrypted ciphers while the melted vinyl takes new symbolic forms. "R.F.C.P." is a collaboration of works by Roland Flexner and Chloe Piene: there is the comical and the performative, the passage of time, the popular culture, punk and all that. 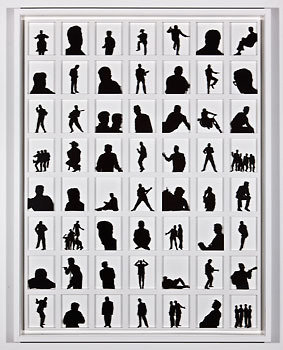 Dario Robleto
The Minor Chords Are Ours

D’Amelio Terras is pleased to present The Minor Chords Are Ours, its second solo exhibition with Dario Robleto. In recent years, Robleto’s handcrafted sculptures have integrated a variety of historical objects to explore themes of war, mourning, and the fragile relationship between humans and the natural environment. In The Minor Chords Are Ours, Robleto returns to a material essential to his earlier work: the vinyl record. Records have long been used as a means of artistic expression for many contemporary artists, as the exhibition The Record: Contemporary Art and Vinyl organized by the Nasher Museum of Art at Duke University, which features Robleto’s work, testifies to. Trevor Schoonmaker writes in the catalogue essay, “Artists…engage with records in many ways: as performance or critique, icon, document or archive, artifact, metaphor, portrait, or transcendent object.”

For Robleto, the material of the vinyl record and the graphics of album covers allows him to explore a universal musical culture and the ways in which our experiences of music shape our identity. This body of work asks the question: How do familial music choices, made before you were born, set the tone for the rest of your life? And how is this sensibility handed down, perhaps subconsciously, through each succeeding generation? Robleto acknowledges the influence of others’ musical choices on ones own identity, as he works mostly from his personal, his mother’s and his grandmother’s music collection as both physical and conceptual source material, but also suggesting a similar story can be told from everyone’s familial musical lineage. Working from this multigenerational perspective, Robleto samples a collective musical heritage as he melts down vinyl discs and excerpts or erases imagery from album covers. Stripped of specific reference to performers, the album covers and other ephemera are reworked into encrypted ciphers while the melted vinyl takes new symbolic forms. Also extending his interest in mourning traditions, these works reflect on death from an unusual perspective – the loss of a band member, a favorite artist, and even the slow death of the album itself. Like the vinyl’s permanently pressed spiral groove that persists as a map of once realized melodic potential, Robleto’s works take on a new state of being while remaining carriers of a shared history.

Dario Robleto is currently featured in the solo exhibition An Instinct Toward Life, on view at the Museum of Contemporary Art Denver from February 4 through May 15, 2011. He is also featured in group exhibitions The Spectacular of Vernacular at the Walker Art Center, Minneapolis, MN and The Record: Contemporary Art and Vinyl, organized by the Nasher Museum of Art at Duke University in Durham, NC. This exhibition will travel to the Institute of Contemporary Art in Boston, the Miami Art Museum, Miami, FL, and the Henry Art Gallery, Seattle, WA. Robleto has a forthcoming solo exhibition at the Des Moines Art Center in Des Moines, IA. Robleto’s work is included in numerous public collections including the Los Angeles County Museum of Art, Los Angeles, CA; Museum of Fine Arts, Houston, TX; Museum of Contemporary Art, San Diego, CA; Nasher Museum of Art at Duke University, Durham, NC; The Hirshhorn Museum and Sculpture Garden, Washington, DC and the Whitney Museum of American Art, New York, NY among others.

D’Amelio Terras is pleased to present R.F.C.P., a collaboration of works by Roland Flexner and Chloe Piene.

Roland Flexner: Talking about contemporary Vanitas is something of a paradox when the thematic no longer relies on philosophical and moral values. Things happen in real time rather than at a symbolic level. There is the comical and the performative, the passage of time, the popular culture, punk and all that -

Chloe Piene: But with popular culture, and punk, it’s a mark of rebellion. A pirate flag.

RF: It was, but now… go to the shops. Recuperation is the grand law of history.

CP: And fashion.
What about the skull?

RF: I try to avoid dealing with the psychology of the skull. I work mostly on the surface of things. My image is lateral, there is no depth really, even though it’s happening in 3 dimensions. To bring things to the surface emphasizes the event, because an event is something that happens without background. If you have a background then you can determine what happened, it becomes predictable and it is like it never happened.

CP: Working with the skull I kind of flit between anatomical truth and fantasy. As an object, and a symbol, it can be both. Even if it is no longer connected in an obvious way to an older sort of Vanitas, that is part of how I got to know it; in danse macabres and crucifixion scenes. Probably that’s why I like it. Or why I feel so akin to it. And why I’ve never questioned it. I like non-dimensional things that can’t be questioned, in that sense it is still the authority.

As for drawing I consider it an event. There is that moment when there is nothing going on but the drawing itself and I dissolve into it quite happily.

RF: And in your sculptures as well, when you use gravity as a way to shape the material.

CP: Yes there is the element of chance, of play, of an open field that is exploratory. At the same time I am working with a very clear sense of order – feeling out how one denies or completes the other. Like the smoke in your pictures. It is positively lyrical – but it is that way because of the extent to which you have let it go, and not, so much, contained it.

RF: How to preserve chance when you still have to deal with composition?

CP: At some point a drawing must have an edge.

RF: Ah that’s true, the subjectile is a malediction as Antonin Artaud puts it.
There are things you cannot avoid.

CP: That said I don’t see much difference between drawing and sculpture, they both invoke a physical event, their physicality is what makes them. Neither of us have work in this show, which is obviously drawing, and yet we both agree, that in the end, what we have made primarily involves drawing. Drawing is fundamental to us both, the beginning and end point, the point of our connection, and our digression, it is the thing that like the skull is at the start of every mark.

Roland Flexner lives and works in New York. His work was included in the 2010 Whitney Biennial and is represented in the collections of the Metropolitan Museum of Art, New York; The Whitney Museum of American Art, New York; Albright Knox Museum, Buffalo; and Musee National d'Art Moderne - Centre Pompidou, Paris.