The Judith Rothschild Foundation Contemporary Drawings Collection. The collection is shaped in its foundation by a dual trajectory of figurative practices on the one hand and abstract, Minimal, and Conceptual vocabularies on the other, tracing a rough chronology of each mode from the 1950s right up to the moment of the collection's completion in 2005. 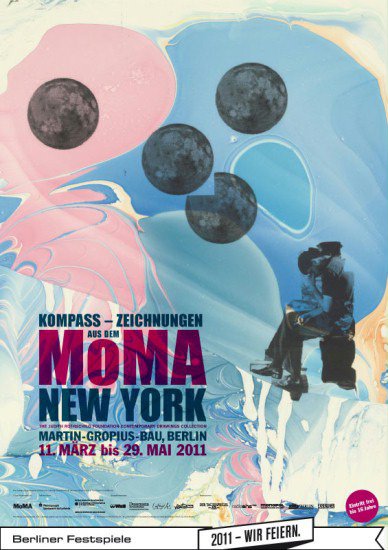 The exhibition title “Compass” refers to the collection’s ambition to cover and dis-cover geographically distinct artistic centres (the navigational compass) and its atten-tion to modes of making (the compass as a drafting tool).

The collection is shaped in its foundation by a dual trajectory of figurative practices on the one hand and abstract, Minimal, and Conceptual vocabularies on the other, tracing a rough chronology of each mode from the 1950s right up to the moment of the collection’s completion in 2005. Among the artists represented in the collection are many of the greats of the twentieth century, including Jasper Johns, Robert Rauschenberg, Donald Judd, Agnes Martin, Edward Ruscha, Lee Bontecou, Martin Kippenberger, Sherrie Levine and Paul McCarthy, a number of well-known contemporary artists such as Kai Althoff, John Currin, Arturo Herrera, Lucy McKenzie, and Paulina Olowska, and introduces into the Museum’s collection artists such as Christian Holstad, Nick Mauss, Seb Patane, and Amelie von Wulffen, all of whom have works presented in this exhibition.

The most recent works in the exhibition suggest new approaches to working with pa-per, using paper as material and source and reconfiguring it in the process. In the first few years of the 2000s, collage and assemblage techniques assume a major role in the production of artists across all disciplines. Appropriation, collage, and montage introduce material experiments and thematic concerns that can range from such dis-crete gestures as transferring found objects into a new art context (a process that is resolutely part of the avant-garde vocabulary since Marcel Duchamps’s Ready-Mades of the 1910s) to more selective imports of elements of found material.

These works represent not so much a reversal or rejection of previous approaches and con-cerns or drawing, but rather must be seen as a new application of many different previous techniques and subjects. Selectively pairing works by artists of different generations and urban centres, the exhibition suggests genealogies and influences, highlighting the basic genres and methods that have endured over time.

They include representational or narrative works, just as they encompass the material and proc-ess-oriented approaches of the 1960s and 1970s. They cull from popular sources and widely distributed materials such as fashion magazines and press images, an act no longer denotes a critical relationship to the means of technological reproduction and the autonomy of images, but rather simply points to the realities in which images are produced and consumed today. And, they radically expand the notion of drawing from a medium of mark-making – as in the material experiments or process drawings – and a medium of “ideation” capable of expressing fantastical worlds – as in the pol-ished and highly worked-through drawings as finished works – to the more inclusive concept of a “work of paper” able to directly represent the world we inhabit.
Christian Rattemeyer