Candice Breitz: You+I, a series of major composite video portraits, including iconic works - John Lennon, Michael Jackson and Madonna - along with 5 large-scale photographic group portraits of communities of music fans. Damian Ortega's exhibition highlights central works of his oeuvre in combination with two specially produced pieces for the Centre; all of them are speaking of points of contact between the tool and matter. PAC-UA offers a window for new produced works of Ukrainian artists, first edition: Vasyl Tsagolov. A permanent exhibition of selected works of the leading International and Ukrainian contemporary artists is presenting in 'Collection Platform 1: Circulation'. 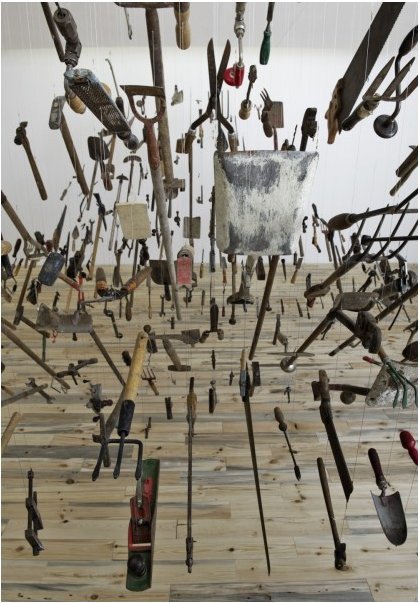 With this exhibition the PinchukArtCentre for the first time brings together a series of major composite portraits, including iconic works such as Working Class Hero (A Portrait of John Lennon), King (A Portrait of Michael Jackson) and Queen (A Portrait of Madonna). Collectively these video portraits – along with the Monuments series (five large-scale photographic group portraits of communities of music fans) – take an intense look at the web of identifications that structures the relationship between stars and their fans.

Factum Tang on the other hand explores the fragility of individuality via a three-channel installation that weaves together the self-narrations of Ukrainian-Chinese triplets based in Edmonton, Canada. As each of the identical triplets answers the same set of interview questions, the similarities and differences that emerge in their answers chart the sisters’ intricate three-way battle for individual being.

A new work that Breitz is producing especially for the PinchukArtCentre will evolve over the course of the exhibition. Tentatively titled Portrait of an Artist, Kiev, it initiated an exchange of portraits between Breitz and Ukraine-based artists. All local artists and creative people have been invited to contribute a portrait of Breitz made in any style, medium or scale to a larger composite installation, and will ultimately receive a portrait of themselves back from Breitz to complete the exchange. All portraits of Breitz submitted by local artists will be exhibited at the PinchukArtCentre. During the first two months of the exhibition, newly submitted portraits will be added to the installation every week, gradually accumulating into a larger piece that Breitz has described as a self-portrait.

Towards the end of the exhibition, Breitz will return to Kiev to shoot video portraits of the contributing artists. This second half of the project will be installed at the art centre during the final weeks of the exhibition.

Candice Breitz: “The work will on the one hand be a group self-portrait, and on the other an attempt to explore a range of artistic approaches to portraiture that are current in Ukraine. Self portraiture is conventionally inward looking – the implication is that the artist has privileged access to herself and a unique ability to express her own essence. This notion will be turned inside out for the Kiev self-portrait: rather than attempting to provide you with an image of who I think I am, I am inviting a community of strangers to collectively portray me”.

Central to the multi-channel video installations for which Breitz is best known, is the question of how an individual becomes him- or herself in relation to a larger community, be it the immediate community that one encounters in family, or the real and imagined communities that are increasingly forged into being via the undeniable influence of mainstream media such as television, cinema and popular music. Multi-channel works made by Breitz over the last decade have explored and unpicked processes of identification and emulation as these manifest themselves within the relationship between the self and intimate others (Factum, Mother + Father, Him + Her), but also processes that have come to structure relationships within the realm of consumer culture. At the heart of Breitz’s work, lies an interest in the somewhat mysterious ways in which the subject finds his or her way into selfhood. Her many obsessive returns to the genre of portraiture in recent years suggest both the impossibility of finitely coming to understand how it is that we become who we are, and the necessity to nevertheless keep on trying.

Candice Breitz was born in Johannesburg, South Africa, in 1972. Her work has been exhibited at the San Francisco Museum of Modern Art, Moderna Museet, Stockholm, The Power Plant, Toronto, and Castello di Rivoli, Turin, among other museums. The Kunsthaus Bregenz recently showed a large survey exhibition of her work. Breitz has been a professor at the Braunschweig University of Art since 2007. She currently lives and works in Berlin.
candicebreitz.net

PinchukArtCentre has the honour to present the solo exhibition of the Mexican artist Damian Ortega. The show entitled Tool Bit will be open from February 12 till April 17, 2011 in the PinchukArtCentre (Kiev, Ukraine).

Ortega’s exhibition highlights central works of his oeuvre in combination with two specially produced pieces for the PinchukArtCentre. Ortega will bring Nine Types of Terrain (2007), showing nine short 16mm projections of bricks falling like dominoes, in formations derived from Sun Tzu’s “Art of War”, and also Project for Social Housing (2007), Moises (2007) and two new sculptures, which are connected to the Ukrainian metal industry.

Damian Ortega: “I usually associate my works with a complex system to separate and classify objects in many parts. But I always have my attention on the simple, gestural ideas. I like tools as I like words. Sometimes I feel part of them when I can use and understand them. Sometimes I am on the opposite side and I feel how they make a bridge which divides me and separates me from the real things.

As the artist says, the selection of works is interesting in this show, because all of them are speaking of points of contact between the tool and matter. A crash, an impact, a knock between two different materials to make us understand and feel the instant of time, a second or a click of transformation from one thing to another.

In the first new work, Ortega brings an old experiment to life, combining molten metal with ice. Melting point are 9 metal landscapes made of lead, aluminium and bronze. It is an archaeological reminder of “ice-scapes” which Ortega covered with melted metal. The solid ice defined the solid form of the liquid metal and was subsequently destroyed by it. The sculptures are the carriers of the traces of the moment of transformation of a landscape.

In his second work made for this show and entitled Tool Beat Ortega shifts the creative manmade gesture to an automated industrial form, derived from the machinery of a steel production factory. The work focuses on the 4 moments of a simple mechanical gesture, heating and pressing repetitively a metal piece cut from a block of metal, which is formed into a wheel.

Damian Ortega’s work could be described as a gesture which becomes form through the use of daily objects or materials. An iconic work such as Módulo de construcción con tortillas (1998), where Ortega uses tortillas to build a molecular structure, is an example of how he makes an abstract humorous reflection on social reality. In other works such as Cosmic Thing (2002), Ortega uses a system of deconstruction for the classification of the object. Tools and objects become a visual language, transforming into a complex artistic statement which is loaded with symbolic meaning and referring to political, economical and social structures of today’s society.

Damian Ortega was born 1967 in Mexico City. He exhibited at Tate Modern, London, Centre Pompidou, Paris, The Museum of Contemporary Art, Los Angeles, Kunsthalle Basel and recently had a large-scale solo show at the Barbican, London. He currently lives and works in Berlin and Mexico City.

For the first edition of PAC-UA, Ukrainian artist Vasyl Tsagolov presents seven new paintings from the Fear Has Many Eyes series. The show includes a number of portraits related to an idea of paranoia which we find all over the world which is a result of the violence of terrorism. The artist also portrays different ballerinas, building a tension between nature, a male viewpoint and the stage.

Vasyl Tsagolov: “The idea of nature is in direct relation to the idea of the stage, although it is not always visible in this project. I find it important to paint the shadows of the ballerinas on the landscape. It is important to understand that the stage in our time is linked to the media, to television, which is a logical place for it. You have a translation of the visual television reality where we live. And at the same time the stage is the place where a translation is shown of things that are really happening”.

For the first time PinchukArtCentre presents Collection Platform 1: Circulation, a permanent exhibition of selected works from the collection representing leading International and Ukrainian contemporary artists. The show located on the 5th floor of the art centre will be on display from February 12 till October 2, 2011 in the PinchukArtCentre (Kiev, Ukraine).

Besides the works that have been shown at the past exhibitions of the PinchukArtCentre such works as Untitled (de Kooning), 2007 by Richard Prince, Kriket, 1998 by Peter Doig or Sacred Heart, 1994-2007 by Jeff Koons etc will be shown in Ukraine for the first time.

A special information system and new viewing area’s directly connected to selected works allow the audience a deeper understanding of artists and their works. The idea is to slow down the speed of viewing and by giving more information allowing the audience to acquiring more knowledge, competence and experience as integral part of the new education offensive.