Marcel Duchamp was one of the first proponents of open art, where the interpretation of the viewer or posterity contributes to the creative act and thus to the meaning of the work. Moderna Museet has one of the world's finest collections of Duchamp's art, and fourteen of these works are now being shown at Moderna Museet. In the exhibition 'Early Modernism. 1900-1920 in the Moderna Museet Collectionon', on display works from Moderna Museet's rich collection of early 20th century art. 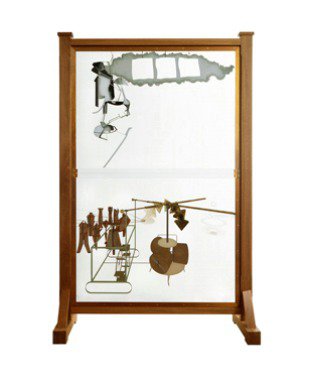 Today, Marcel Duchamp is regarded as one of the most prominent and innovative artists of the 20th century, and his famous work Fountain was selected as the most influential work of the 1900s. Starting this spring and ending in the autumn, Moderna Museet Malmö gives you the opportunity to see more of this fascinating oeuvre that was perpetually breaking new ground.

Marcel Duchamp (1887-1968) emphasised the importance of the concept in a work of art. He was one of the first proponents of open art, where the interpretation of the viewer or posterity contributes to the creative act and thus to the meaning of the work. Moderna Museet has one of the world’s finest collections of Marcel Duchamp’s art, and fourteen of these works are now being shown at Moderna Museet Malmö.

Marcel Duchamp painted his last cubist-like painting in 1912. Shortly thereafter, he started on his big glass piece, La mariée mise à nu par ses célibataires, même (The Bride Stripped Bare by Her Bachelors, Even). He worked on this enigmatic and ambitious work for ten years, and made only a few paintings after 1912. Two years later, he decided to emigrate to the USA. He arrived in New York in 1915, where he was already famous thanks to his previous works, including Nude Descending a Staircase No. 2.

Readymade is a term that was coined by Duchamp at the time to describe the objects he selected and presented as art. The first of these, Roue de bicyclette (Bicycle Wheel), is from 1913, and was followed by Porte-bouteilles (Bottle Rack) in 1914. His famous Fountain was presented in 1917. A couple of years earlier, Duchamp embarked on his big glass piece, The Bride Stripped Bare by Her Bachelors, Even, which he abandoned in 1923 and never completed. The work consists of two glass panes divided by a distinct borderline. Duchamp called them domains, where the upper belongs to the bride and the lower to her nine bachelors.

When Moderna Museet was planning its legendary exhibition Movement in Art in 1961, Pontus Hultén wanted to borrow the Glass from the Philadelphia Museum of Art. When this proved impossible, the art critic Ulf Linde and the artist PO Ultvedt were commissioned to make an exact replica. This was completed in two months in consultation with Duchamp, who later signed this replica. Thirty years later, Ulf Linde made a further replica, helped by the artists Henrik Samuelsson and John Stenborg, to have the opportunity to correct the mistakes he had discovered over the years in the first attempt.

For an exhibition in Stockholm in 1963, Ulf Linde decided to make replicas of several of Duchamp’s readymades, with the approval of the artist. These were subsequently shown at exhibitions around the world in the 1960s, where Duchamp signed them. All these works are now in the Moderna Museet collection.

Guided tour with babies
21 April at 11 am–12 pm, 1–2 pm: tour of Early Modernism and Marcel Duchamp
A special tour for the youngest. Guided tour with babies is a special tour where the babies set the pace. Together we explore the current exhibitions with highlights from The Moderna Museet Collection with art from the first twenty years of the 1900s.

In this exhibition, we highlight works from Moderna Museet’s rich collection of early 20th century art, including artists such as Pablo Picasso, Georges Braque, Henri Matisse, Wassily Kandinsky, Siri Derkert, Sonia Delaunay, Edvard Munch, Ernst Ludwig Kirchner and many others. Thanks to this presentation, visitors to Moderna Museet Malmö can learn more about the early phase of modernism.

In the latter half of the 19th century, the rules and norms governing visual arts were dissolved and replaced by a wide array of artistic possibilities, where small constellations of artists fought for new, revolutionary ideas. Partly as a consequence of the emerging art of photography in the second half of the 1800s, the artists of the time eschewed the concept of naturalistic depiction and instead began to explore the conditions of painting. Illusionist painting was no longer a viable alternative.

Paris was still the European capital of painting, attracting young artists from all over the continent who sought to study, encounter the new art and meet other artists. Solo exhibitions of Cézanne, van Gogh and Gauguin in the early 1900s, introduced many of them to the inspiringly colourful and expressive style of post-impressionism. Other young artists discovered non-European art that had been brought back to Paris from the colonies and by explorers and was now exhibited in ethnographic and anthropological museums. Masks and sculptures from Africa, Oceania and South America, which had formerly not been regarded as art, now made a deep impression on artists and opened up to new expressions in art.

Two movements stand out among the great variety of expressions and styles that arose during this period: expressionism, based on the qualities and potential of colour, and cubism, based on form. Both movements can be said to have originated in Paris, and both are prodigiously represented in the Moderna Museet collection.

In the decade leading up to the First World War, both French and German artists began, independently of one another, to paint with strong, pure colours. In France, these artists were called Les Fauves, and in Germany one group called themselves Die Brücke, and another Der Blaue Reiter. These artists are also known collectively as expressionists.

Fauvism is commonly regarded as the first real avant-garde 20th century movement. It was an amorphous group of artists around Henri Matisse, which only existed between 1904 and 1907. When Matisse, Maurice de Vlaminck and Georges Rouault exhibited at the autumn salon in Paris in 1905, their strong, bold colours prompted the critics to dub them the wild beasts “les fauves”. The focus for the fauvists was on colour as a form of expression in its own right, and they also departed from the conventional one-point perspective.

Matisse travelled many times to North Africa, where he was inspired by Oriental pattern designs, with brightly-coloured stylised plant ornamentation in decorative compositions. In 1908, he started an art school, where he taught a rapidly growing class of young artists. Many of his students were from Scandinavia. Isaac Grünewald and Sigrid Hjertén were two of his most famous Swedish students. In Isaac Grünewald’s portrait of his son Ivan by the armchair, it is easy to discern traces of Matisse’s ornamental lines and free treatment of colour. Matisse’s influence is also evident in Sigrid Hjertén’s The Red Blind. But Hjertén found her own style and abandoned safe decorativeness for wild, steep perspectives and naked, twisted female bodies to convey a sense of claustrophobia and looming danger.

In 1905, a group of German artists in Dresden formed Brücke (The Bridge). By emphasising unity between man and nature, they sought authenticity. They also intentionally eschewed spatial depth, proportion, perspective and realistic colouring, using strong colours to convey their impressions of the harsh, pressured social conditions created by industrialism. Ernst Ludwig Kirchner wrote the groups manifesto, and in 1908, Kirchner, Erich Heckel and Karl Schmidt-Rotluff exhibited their work together with the fauvists in Dresden. Having painted mostly nudes in Dresden, Kirchner moved to Berlin, where he began painting the urban landscapes that are now among the most famous German expressionist works.

In 1911, Wassily Kandinsky published his Concerning the Spiritual in Art in Munich, presenting a new programme for painting: a resounding cosmos of freely flowing colours and shapes springing from inner necessity. Kandinsky strove to visualise an inner, spiritual world through art, and laid the foundations for abstract expressionist art at around this time. Strongly influenced by music, he called his paintings improvisations and compositions.

Parallel with these expressionist strivings, a more formal style was developing within European painting. The origins of cubism can be traced to Cézanne’s late works with their muted palette and fragmented perspective, along with his attempts to reduce natural shapes into cylinders, spheres and cones. Picasso and Braque explored formal issues concerning the structure of the image, and in the process they dissolved the renaissance ideal of a uniform pictorial space based on the one-point perspective. Both artists closed the traditional pictorial space and emphasised the surface, the two-dimensional plane.

Cubism can be seen as a radical departure from European painting and its 500-year-old tradition of realistic depiction. The first phase of cubism, analytical cubism, was both revolutionary and influential, even though it only lasted a couple of years, approximately 1907-1911, and was developed by two artists who collaborated closely. The subsequent phase, synthetic cubism (ca 1912-1919), involved other artists, including Juan Gris. In this second stage, other materials and surface textures were also introduced, and the collage became a significant medium. Picasso, Alexander Archipenko and Henri Laurens were among the first to apply cubist ideas also to sculpture.

Saturday, 19 March, 2 pm
Guided tour
The director of Moderna Museet Malmö, Magnus Jensner, presents this year’s new group exhibition from the permanent collection, Early Modernism: 1900–1920 in the Moderna Museet Collection. The exhibition features selected works by artists such as Picasso, Braque and Matisse. This guided tour is included in the admission fee.