Together for the first time 39 paintings from Philip Guston's Roma series, produced during his six months as artist-in-residence at the American Academy in Rome in 1970-71. Saturated in deep pinks and salmons, Guston's cartoon-like pictures evoke numerous aspects of the ancient and modern Roman cityscape and Italian art and culture, from the films of Federico Fellini to the works of both modern and Renaissance Italian artists. David Smith Invents explores an extraordinarily fertile period in the career of the sculptor from the early 1950s to the early 1960s. He used such widely varying materials as steel, bronze, oil paint, aerosol spray enamels, ink, and tempera to explore his ideas in two and three dimensions. 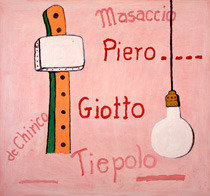 David Smith Invents explores an extraordinarily fertile period in the career of the sculptor David Smith (1906–65) from the early 1950s to the early 1960s. On exhibit are 40 works, including sculptures, paintings, drawings, and Smith's own photographs of his sculptures.

Smith famously recognized no distinction between sculpture, painting, and drawing, except for one dimension, asserting that the act of creating does not change just because the medium changes. Instead, he used such widely varying materials as steel, bronze, oil paint, aerosol spray enamels, ink, and tempera to explore his ideas in two and three dimensions.

The work of Smith’s last 15 years used an increasingly simplified vocabulary of predominantly geometric forms. In the first part of the 1950s, he was particularly captivated by concave and convex forms, from which he produced endless variations on volume, shape, line, and contour, without employing solid mass. In the works in this exhibition, concave and convex shapes play out in two and three dimensions in multiple configurations and repetitions, moving freely between media.

At the heart of David Smith Invents is Bouquet of Concaves (1959), a recent gift that is the first Smith sculpture in the museum's collection. Never previously exhibited after Smith’s death in 1965, the sculpture is united here for the first time with two related works that will be equally new to visitors—Bouquet of Concaves II (1960), and Black Concaves (1960). These three works are among Smith’s most important, but little known, steel sculptures during his transition from anthropomorphic, figurative works in the early 1950s to relief-like abstract sculptures at the end of the decade; those, in turn, precede the large-scale steel abstractions for which he is best known. Three other Smith sculptures from this productive time—Tanktotem IV (1953), Auburn Queen (1954), and Raven V (1959)—explore concave and convex forms in more figurative works.

Smith wrote that Bouquet of Concaves inspired him to think of concave forms in new configurations and unities on a monumental scale. He also included it in the feature article that Arts magazine did on him in February 1960—the first cover that Arts ever devoted to a single artist. This special issue of the magazine will be on display as part of the exhibition. Recognizing it as a unique opportunity to shape the presentation of his work to a larger audience, Smith contributed many photographs and notes on his recent works, including annotated photographs of Bouquet of Concaves in progress and in finished form.

David Smith Invents is the first exhibition of Smith's work in Washington, D.C., in 25 years.
The exhibition is organized by The Phillips Collection; the curator is Susan Behrends Frank, Ph.D., associate curator for research.

A 112-page catalogue accompanies the exhibition

Philip Guston, Roma brings together for the first time 39 paintings from Philip Guston's Roma series, produced during his six months as artist-in-residence at the American Academy in Rome in 1970–71. Saturated in deep pinks and salmons, Guston’s cartoon-like pictures evoke numerous aspects of the ancient and modern Roman cityscape and Italian art and culture, from the films of Federico Fellini to the works of both modern and Renaissance Italian artists.

The Roma paintings mark a pivotal time in Guston's career. Guston (1913–80), whose abstractions in the 1950s and 1960s won him critical acclaim, was a leading figure in the New York School that included such artists as Jackson Pollock, Mark Rothko, and Willem de Kooning. By the late 1960s, however, Guston felt abstraction was no longer viable. Profoundly affected by the social and political upheaval of the 1960s and the shift in the art world toward pop art and minimalism, Guston was determined to reinvent storytelling in modern painting. His initial effort at creating this new figurative vocabulary went on view at New York’s Marlborough Gallery just weeks before he left for Rome. These new works, with their sophisticated political satire and self-parody painted in a deliberately clumsy style, stunned the artistic community, which neither understood nor accepted them.

Psychologically spent from creating those brash allegorical narratives, Guston retreated to the solace of Rome, a special place for him since his time as a fellow at the American Academy in 1948–49. In Rome, reeling from the outcry provoked by his most recent work, Guston began a series of works in oil on paper known as the Roma series. In this little known group of pictures, Guston developed the tragicomic sensibility central to the monumental, existentialist canvases from the 1970s for which he is now celebrated.

Although individual paintings from the Roma series have been exhibited, the work has never before been gathered together and displayed as a group. The Phillips Collection is the only United States venue for this ground-breaking exhibition.

As a part of La Dolce DC, a citywide celebration of all things Italian in partnership with the embassy of Italy, Philip Guston, Roma presents a crucial period in the life of a modern American artist inspired and shaped by Italian art and culture, not only during his Roman sojourn in 1971, but throughout his life.

Philip Guston, Roma is organized by the City of Rome and the Museo Carlo Bilotti—Aranciera di Villa Borghese, in partnership with the American Academy in Rome.
The exhibition curator is Peter Benson Miller.

Philip Guston, Roma is made possible by a grant from the Terra Foundation for American Art.

A 221-page catalogue accompanies the exhibition.

The Phillips Collection
1600 21st Street, NW Washington, DC 20009
Hours:
Tuesday to Saturday from 10 am to 5 pm, with extended evening hours on Thursdays until 8:30 pm, and on Sundays from 11 am to 6 pm.
Admission to the special exhibition is $12 for adults and $10 for students and for visitors 62 and over
no charge for admission for visitors 18