'Rooms with a View: The Open Window in the 19th Century' is the first exhibition to focus on this motif as captured by German, Danish, French, and Russian artists around 1810-20. Works range from the initial appearance of the motif in two sepia drawings of about 1805-06 by Caspar David Friedrich to paintings of luminous empty rooms from the late 1840s by Adolph Menzel. The show features 31 oil paintings and 26 works on paper. Also at Metrolpolitan 'The Washington Haggada' - one of the most important illustrated Hebrew manuscripts preserved in an American public collection and an unprecedented loan from the Library of Congress. A Haggadah is the book used at the Passover seder, the ritual meal that commemorates the exodus of the ancient Israelites from Egypt. 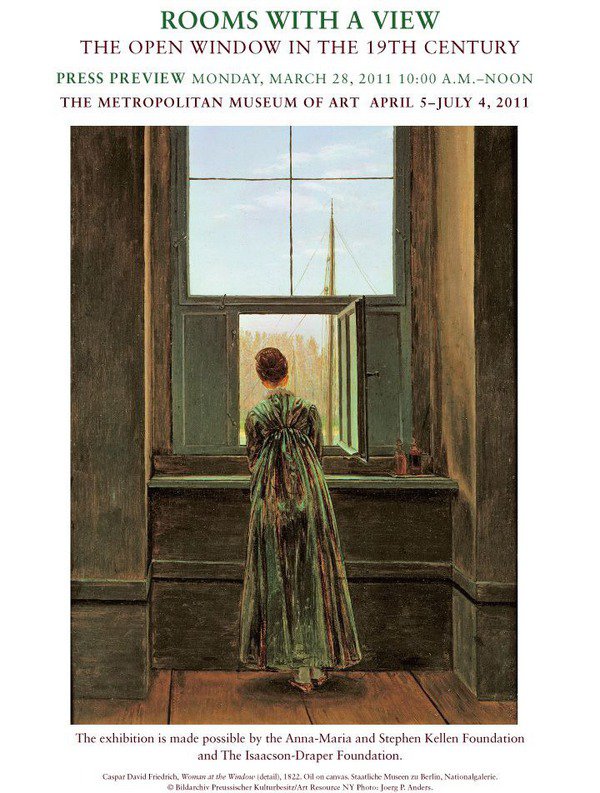 Rooms with a View
The Open Window in the 19th Century

Rooms with a View, First Exhibition to Focus on Motif of the Open Window in 19th Century Art, at Metropolitan Museum.
During the Romantic era, the open window appeared either as the sole subject or the main feature in many pictures of interiors that were filled with a poetic play of light and perceptible silence. Rooms with a View: The Open Window in the 19th Century, at The Metropolitan Museum of Art from April 5 through July 4, 2011, is the first exhibition to focus on this motif as captured by German, Danish, French, and Russian artists around 1810–20. Works in the exhibition range from the initial appearance of the motif in two sepia drawings of about 1805–06 by Caspar David Friedrich to paintings of luminous empty rooms from the late 1840s by Adolph Menzel. The show features 31 oil paintings and 26 works on paper, and consists mostly of generous loans from museums in Germany, Denmark, France, Italy, Austria, Sweden, and the United States.

The exhibition is made possible by the Anna-Maria and Stephen Kellen Foundation and The Isaacson-Draper Foundation.

In 1805–06, the important German Romantic artist Caspar David Friedrich (1774–1840) created two sepia drawings that became greatly influential showing views outside the windows of his studio in Dresden. In Friedrich's treatment of the open window, the Romantics recognized a potent symbol for the experience of standing on the threshold between an interior and the outside world. The motif's juxtaposition of the very close and the far away became a metaphor for unfulfilled longing, a sentiment first expressed by the Romantic poet Novalis (Friedrich von Hardenberg, 1772–1802), who wrote: "Everything at a distance turns into poetry: distant mountains, distant people, distant events: all become Romantic." Like Friedrich, other Romantic artists were drawn to the view from the window for its symbolic power, and not simply for the beauty of the landscape itself. For them, the rectangular or square shape of the canvas echoed perfectly the window as a view of the world.

Rooms with a View features the two seminal Friedrich images—shown for the first time in this country—as well as works by some 40 other artists, mostly from Northern Europe, including Carl Gustav Carus, Johan Christian Dahl, Georg Friedrich Kersting, Léon Cogniet, Wilhelm Bendz, and Adolph Menzel, among others. Many of the artists are little known on these shores, their works unseen until now.

The works in the exhibition are in distinct groupings: austere hushed rooms with contemplative figures reading, sewing, or writing; studios with artists at work; and windows as sole motif. The mood in these pictures can shift from early Romantic severity to Biedermeier coziness to poetic Realism, yet they all share a distinct absence of the anecdote and narration that characterized earlier genre painting.

Exhibition Overview
Rooms with a View begins with a gallery of works depicting rooms with figures. The vogue for pictures of bare rooms that reflect their sitters' frugal lifestyles coincides with the Napoleonic Wars of 1803–15 and their aftermath, when daily life in both Germany and Denmark had turned grim. Ironically, this period coincided with the "golden age" of Danish painting, characterized by visual poetry in the works of Wilhelm Bendz (1804–1832) and Emil Bærentzen (1799–1868), who celebrated modest family life and gatherings. Similarly, none of the upheaval of the time is reflected in the works of the German artist Georg Friedrich Kersting (1785–1847), who countered outward chaos with idyllically ordered interiors. Sober attention to detail marks these 19th-century interiors, in which silence and light become the main subjects. Figures are seen from the back or in lost profile as they sit at a window to read, write, sew, or, as in Friedrich's iconic Woman at the Window (1822), gaze through it.

Artists' studios are featured in the next gallery of the exhibition. Depictions of artists in their studios have a long tradition, especially in the interiors of 17th–century Dutch genre painting. The moods created in 17th–century and early 19th–century pictures are quite different, however, as is the treatment of the window. In the earlier pictures, windows are most often shown in an oblique, foreshortened view, and as sources of light, without views. By contrast, in the 19th–century pictures, windows usually run parallel to the picture plane, with views seen through them. Some of the works featured in this section are a painting of Caspar David Friedrich in his austere Dresden studio as portrayed by Georg Friedrich Kersting, his admiring younger colleague, canvases by French artists showing unidentified female artists working in elegant drawings, rooms overlooking picturesque Parisian views, as well as pictures by their male colleagues, who could compete for the prestigious Prix de Rome, which allowed them to spend five years as pensionnaires at the Académie de France in the Villa Medici in Rome.

The two Caspar David Friedrich sepia drawings of 1805-06 that inaugurated the Romantic motif of the open window are highlighted in the next gallery devoted to works on paper. Unlike the stark balance between the darkened interior and the pale landscape rendered in these views, the artists who followed Friedrich created gentler versions of the motif. Their windows open onto flat plains in Sweden, parks in German spas, or rooftops in Copenhagen, and artist's studios overlook houses in Dresden or Turin, bucolic Vienna suburbs, or Roman cityscapes saturated with light.

Rooms with a View concludes with a gallery of paintings of open windows and empty rooms. For artists, the enduring attraction of this subject lies in its purely visual appeal: echoing the rectangular or square shape of the canvas, the window view turns into a "picture within a picture." Even a barren landscape, when framed in a window, can be transformed into an enthralling scene. Some artists recorded actual sites—Copenhagen's harbor, the river Elbe near Dresden, the Bay of Naples—while others invented, or even largely blocked, the views from their studios or painted them in the chill of moonlight. Highlights of this section include View of Pillnitz Castle (1823) by Johann Christian Dahl (1788–1857) and four paintings by the German Realist Adolph Menzel (1815– 1905). Created between 1845 and 1851, Menzel's pictures are devoted to the effects of light in mostly empty rooms, such as his bedroom in daylight with a view of expanding Berlin outside the window, his sitting room with closed shutters at twilight, and the building's staircase at night.

Menzel never exhibited these small works during his lifetime, regarding them as mere experiments, and they were discovered only after his death.

Curatorial Credits
Rooms with a View is organized by Sabine Rewald, Jacques and Natasha Gelman Curator in the Department of Nineteenth-Century, Modern, and Contemporary Art at the Metropolitan Museum.

Catalogue and Related Programs
The exhibition is accompanied by a fully illustrated catalogue written by Sabine Rewald and published by The Metropolitan Museum of Art and Yale University Press. It is on sale in the Museum's bookshops (softcover, $30).

The catalogue is made possible by the Anna-Maria and Stephen Kellen Foundation.

An audio tour, part of the Museum's Audio Guide Program, is available for rental ($7, $6 for Members, $5 for children under 12).

A variety of educational programs accompany the exhibition including gallery talks, Drop-in Drawing sessions, and a Sunday at the Met lecture program followed by a musical presentation on May 22.

The exhibition and its related programs are featured on the Museum's website at www.metmuseum.org.

Rare Medieval Hebrew Manuscript to be Displayed at Metropolitan Museum

The Washington Haggadah—one of the most important illustrated Hebrew manuscripts preserved in an American public collection and an unprecedented loan from the Library of Congress—will be shown at The Metropolitan Museum of Art beginning April 5, to coincide with the observance of Passover later that month. A Haggadah is the book used at the Passover seder, the ritual meal that commemorates the exodus of the ancient Israelites from Egypt. Although the essential components of the text were established in the second century, the Haggadah was first made into an independent, illustrated book in the Middle Ages. The manuscript will remain on view through June 26.

With captivating images in tempera and gold on parchment, the Washington Haggadah bears the date January 29, 1478, and the signature of the renowned scribe and illuminator Joel ben Simeon. Born in Cologne around 1420, Joel ben Simeon worked in both Germany and northern Italy. Ten Hebrew manuscripts bearing his signature survive, and haggadot were something of a specialty. Certain details of the text of the Washington Haggadah—including an early, specific reference to horseradish as the bitter herb to be used at the meal—distinguish this book as one created while Joel ben Simeon was working in Germany.

The Haggadah offers particularly strong testimony to the vitality of visual arts in Jewish life. Its margins display numerous depictions of medieval Jews preparing for and participating in the seder: removing leavened bread from the house and burning it, roasting the lamb, and drinking wine.

The Haggadah will be displayed alongside contemporary works of medieval art in other media, including German glass vessels and Italian ceramics similar to those shown in the manuscript.

Among nearly 20,000 Hebrew books in the Library of Congress (the earliest of which come from Thomas Jefferson’s library), the Washington Haggadah, purchased before 1920, is of unique importance as a work of art. Its presentation at the Metropolitan Museum inaugurates a series of loans, each of which will focus on a single, illuminated medieval Hebrew manuscript. Over the next three years, one by one, a Hebrew manuscript from an American or European library will be showcased in the medieval art galleries of the Metropolitan Museum’s main building, set in the context of related treasures from the Museum’s collection.

This series is made possible in part by The David Berg Foundation.

This notable series of loans builds upon an ongoing program of important loans of Hebrew manuscripts from the Library of the Jewish Theological Seminary in New York.

A facsimile edition of the Washington Haggadah will be available in the Metropolitan Museum’s book shops ($39.95). Published by The Belknap Press of Harvard University Press and by the Library of Congress, the book features a translation and annotation of the text and an introduction by David Stern, the Moritz and Josephine Berg Professor of Classical Hebrew Literature at the University of Pennsylvania, and an introduction by Katrin Kogman-Appel, Associate Professor of the Arts at Ben-Gurion University of the Negev.

In a pair of lectures on Thursday, April 7, at 2:00 p.m. in the Museum’s Grace Rainey Rogers Auditorium, Katrin Kogman-Appel and David Stern will explore aspects of the Haggadah. The program is free with Museum admission.