Under the moniker MadeIn, Shanghai-based artist Xu Zhen employs a pool of young artists to conceive and execute vast quantities of work in a range of media. By appropriating and borrowing messages and rhetorical devices of mass media, public service announcements, and news reports these works prompt a critical approach to information. Olivier Mosset was born in Berne, Switzerland, in 1944. That fact is also the point of departure of new series of works by the seminal Swiss artist on view. 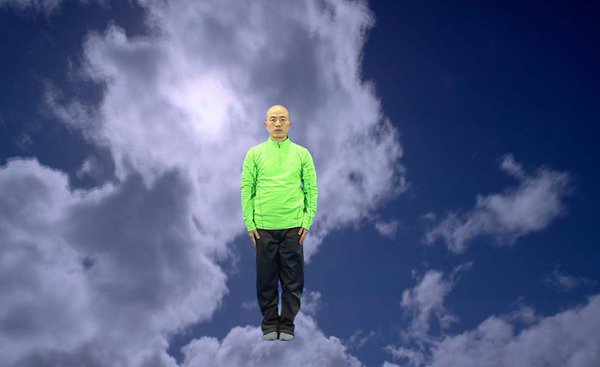 Under the moniker MadeIn, Shanghai-based artist Xu Zhen employs a pool of young artists to conceive and execute vast quantities of work in a range of media. Since the group’s inception in 2009, MadeIn’s paintings, sculptures and installations have frequently been shown in both solo presentations and group exhibitions. Works appropriate visual and conceptual references in their formal aesthetic features. MadeIn is organized as a creative company to produce independent and commissioned artworks and exhibitions. Xu Zhen has chosen to engage with this conventional operational model to problematize cooperative cosplay relationships within the field of contemporary visual culture and to urgently examine the continual materialization of visual spectacles in society today.

Xu Zhen himself is one of the most renowned conceptual artists to have emerged from China since the 1990s, but now he is playing down his
personal identity. For an exhibition in 2009 called Seeing One’s Own Eyes, MadeIn impersonated a fictional group of Middle Eastern artists. The work however was all made in China for a kind of exhibition in disguise – ‘an exhibition of an exhibition’. Through a range of media including sculpture, video and installation, clichéd images of the Middle East such as oil, religious conflict and war raise issues of cultural perception. Consistently seeking to push the boundaries of social and cultural assumptions and their relations to factual realities, MadeIn deploys a variety of mediums situated for the task at hand including, video, photography, installation, painting, collage and performance. Daring and controversial, the works challenge the viewer to validate the truth.

MadeIn is a new artists’ collective founded by Chinese artist Xu Zhen in Shanghai in 2009. Derived from ‘Made In’, two words that refer to manufacturing (with country of origin not specified), the name also phonetically translates into Chinese for ‘without a roof’ (‘méi d˘ı∙ng’), thereby suggesting openness to the collective’s work. Drawing on Xu Zhen’s vast experience over the past decade, as artist, but also as arts organizer, including directing an artist run space, the company provides a comprehensive approach towards art creation, blurring the lines between exhibition, production and curating, as well as authorship.

Through its play with scale, substance, and space, and the obsession with notions of authenticity, sincerity and truth, MadeIn continues to expand its projects, engaging further with the process of art production, consumption and display.

Spread is a new project by MadeIn including several works consisting of various materials and fabrics, laid out onto canvas, utilizing the motif of contemporary satirical cartoons and comics, providing incisive and witty commentary about larger political and social events. By appropriating and borrowing messages and rhetorical devices of mass media, public service announcements, and news reports these works prompt a critical approach to information. The works claim to use the “media as a medium... to create media.”

Olivier Mosset was born in Berne, Switzerland, in 1944. That fact is also the point of departure of new series of works by the seminal Swiss artist at Kunsthalle Bern. Mosset will delve into his earliest memories of the city of his childhood and bring them back in an oblique way. Resident in the United States since 1977, Mosset now lives and works in Tucson, Arizona. He moved to France in 1962. For a brief period, he was associated with Daniel Buren, Niele Toroni and Michel Parmentier. From December 1966 until December 1967, the four artists publicly expressed their desire to break with institutional structures and recognised artistic models. During the same year, Olivier Mosset created several paintings featuring the same black circle on a white ground at the centre of a 1 x 1 metre square. Between 1966 and 1974, he produced about two hundred paintings of circles. The relationships that he created among shades of colour from 1976 progressively led him towards monochrome painting. In 1977, Mosset moved to New York. For the Paris Biennale, he produced a wall-sized painting covered with a coat of red, through which could be discerned the traces of stripes in pencil; confused with the wall, the painting went unnoticed. In 1978, he met Marcia Hafif, with whom he established an artist’s group; this resulted in the exhibitions entitled New abstraction (1983) and Radical painting (1984). In 1986, Mosset participated in the Tableaux abstraits exhibition at the Villa Arson in Nice. The same year, he presented paintings with titles for the first time. Although he never belonged to the “Néo-Géo” movement, Olivier Mosset maintained relations with these artists: Peter Halley, Helmut Federle and John Armleder. In 1990, he exhibited in the Swiss Pavilion at the Venice Biennale. Olivier Mosset has collaborated on numerous occasions with such diverse artists as Andy Warhol and Steven Parrino, at the Pierre Huber gallery in Geneva in 1990; with John Armleder, who invited him to present a skateboard ramp at the Lyon Biennale in 1993; and with Cady Noland at the Migros Museum of Contemporary Art in Zurich 1999. Olivier Mosset has also produced on-site art and open-air sculptures: in Neuchâtel and Bienne, for example. In 1994, in the Sion Museum of Fine Art, he designed an installation made of cardboard that echoed – life-size – the shape of the anti-tank barriers familiarly called “Toblerones” by the Swiss during the Second World War. In 2003, Oliver Mosset presented a two-fold retrospective at the Museum of Fine Art in Lausanne and at the Art Museum St. Gallen.