The exhibition pays attention to the way Nam June Paik anticipated the advent of the mediascape, which we are living in today, long before those theorists conceptualized it. His way of''walking' the mediascape is far from being linear or sequential: he weaves through an existing spatiotemporal constellation in a characteristically radical way, thereby creating his own mediascape. Works of Jeremy Bailey, Kristin Lucas, Dan Mikesell, Marisa Olson, Nam June Paik, Yuri Suzuki, Jan Verbeek, Bill Viola, Minha Yang. 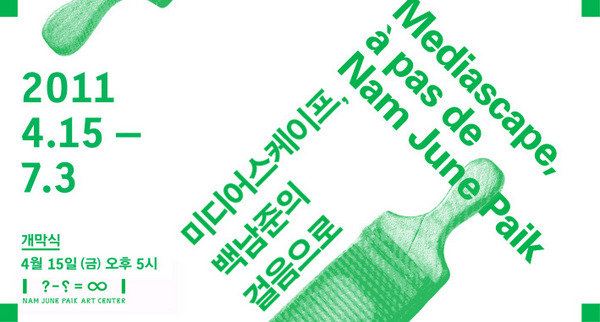 The Nam June Paik Art Center is pleased to first announce the appointment of Manu Park as its new Director. Manu Park (b.1959) obtained a B.A. and a M.A. in aesthetics in Seoul National University, and completed a D.E.A. in aesthetics in Université Paris 1 Panthéon-Sorbonne. Previously working as Director of Exhibitions for Gwangju Biennale and as curator and Artistic Director of Busan Biennale 2004/2006, he has been an independent curator producing many international art exhibitions, including "Leisure, a Disguised Labor?" organized by Korean Ministry of Knowledge Economy for Hannover Messe 2009, and "The Multicultural in Our Time" at Gyeonggi Creation Center in collaboration with Palais de Tokyo in Paris in 2010. He is currently in charge of Artistic Directorship of Atelier Hermès, Seoul.

With the newly reoriented direction of Manu Park, the NJP Art Center will seek to strengthen its role to develop initiatives to revitalize Paik's artistic legacy. As a first step in doing so this year, the NJP Art Center is delighted to present a new exhibition "Mediascape, à pas de Nam June Paik." This exhibition picks up on the notion of 'mediascape,' which was put forward by scholars such as anthropologist Arjun Appadurai (1990) and art historian David Joselit (2005). The term indicates a shifting configuration of the world in global flows, the driving force of which is the availability and distribution of new media and technology. We live in the mediascape, "a new spatial order: a space in which the virtual and the physical are absolutely coextensive, allowing a person to travel in one direction through sound or image while proceeding elsewhere physically."

The exhibition pays attention to the way Nam June Paik anticipated the advent of the mediascape, which we are living in today, long before those theorists conceptualized it. His way of 'walking' the mediascape is far from being linear or sequential: he weaves through an existing spatiotemporal constellation in a characteristically radical way, thereby creating his own mediascape. The phrase "à pas de Nam June Paik" in the title comes from Paik's 1991 exhibition "À pas de Loup: de Séoul à Budapest" where he staged a shamanistic performance in memory of Joseph Beuys. Paik's art always makes ambiguous the boundaries between humans and non-humans, between the East and the West, between tradition and modernity, between virtual and physical, which we would call "à pas de Nam June Paik".

This exhibition will pose questions as to how Paik brought new media and technology to his art in the way that fundamentally changed our perception of the world and way of life, and to what extent Paik's vision of the mediascape to come is relevant to the 21st century. Another vital part of this exhibition is hence how contemporary artists of today navigate their ways and act on their places in the mediascape that Paik created and anticipated. The exhibition includes the works of Jeremy Bailey, Eunji Cho, Sunghun Choi + Sunmin Park, EIKE, JODI (Joan Heemskerk & Dirk Paesmans), Kichul Kim, Shinil Kim, Kristin Lucas, Dan Mikesell, Marisa Olson, Nam June Paik, Yuri Suzuki, Jan Verbeek, Bill Viola, and Minha Yang.

In the two-storey space of the NJP Art Center, the works of Nam June Paik and other artists will be mingled together. The whole space will be made to constitute a kind of seamless mediascape where visitors play its 'topography' out in a bodily manner, and thus the Paikian way of living in the mediascape can come out in performative and revelatory ways. Additionally, we will also use the façade of the Seoul Square building, located across from the Seoul Station, as part of our exhibition space, which was realized in cooperation with Gana Mplanet. One of Paik's "Suite 212" video series will be projected every night onto the huge screen, soaring 256 feet high and stretching 325 feet wide, which consists of 42,000 LEDs, so that the two physically distant sites are connected within this exhibition's mediascape. The exhibition is an effort to pave the way for a new prospect to lay open the embedded but hitherto veiled layers of the Paikian mediascape.

The NJP Art Center is supported by Gyeonggi Cultural Foundation and Gyeonggi Province.