Arsenal. In its variety of form and configuration, including suspended objects, floor works, ammunition piles and other accessories, Arsenal reveals the intensity of the boys' pursuit, Frost's curiosity about it and her obsessive fascination with object-making. 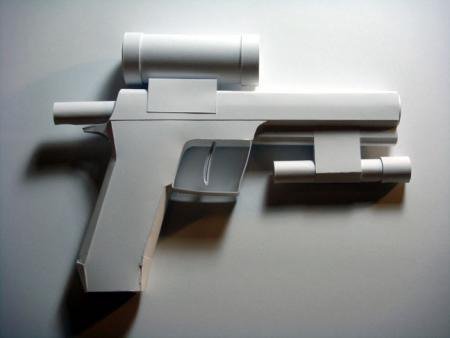 P•P•O•W is pleased to present our first solo exhibition with Sarah Frost, "Arsenal". Frost recently discovered and focused her attention on a community of boys who self-publish instructional YouTube videos for making paper guns. Learning this craft, Frost has amassed a comprehensive arsenal - from handguns to elaborate Halo-inspired assault rifles - to create a monumental installation. In its variety of form and configuration, including suspended objects, floor works, ammunition piles and other accessories, Arsenal reveals the intensity of the boys' pursuit, Frost's curiosity about it and her obsessive fascination with object-making.

Shown only once before at the Great Rivers Biennial 2010 exhibition at the Contemporary Art Museum Saint Louis, Arsenal extends Frost's interest in constructing immersive environments. She has said "...my recent works rely on scale to create a sense that the viewer is within a larger framework. I often employ hundreds or thousands of similar units in an installation; together these units create a space that contains the viewer." Interested in the history of objects, Frost collects found or discarded objects and repurposes them into built environments. She chooses objects for visible evidence of their use, social value and what they imply about the people who used them; in the past she has worked with materials as diverse as telephone cords, appliances and keys taken from computer keyboards, referencing a desire for the personal in the masses of forgotten objects. Arsenal combines this interest in the readymade with a passion for the well-crafted, as she methodically created hundreds of provocative gun forms found online.

Initially, Frost was attracted to the ingenuity of the homemade videos and guns but simultaneously stunned by the knowledge the boys had about the workings of the guns. She responded to the idiosyncrasy of the videos, such as an account of shooting Grandpa's snub-nosed revolver or using 1,400 sheets of paper to make a M134 Vulcan with tripod, and to the inventiveness of the gun forms. Their simple materials – paper and tape – belied their sophistication, as most shot paper darts through blowtubes, and many had moving parts: spinning chambers, folding or extendable stocks, pump-action barrels etc. For Frost, this simultaneous attraction to the workmanship and discomfort with the subject matter was fascinating. Like an anthropologist, in "Arsenal" she re-presents found forms; because they are found, they are inherently reflective of their context and society. While the installation evokes questions – of meaning, politics, fragility, the need to communicate and so forth – above all it is a distillation of form, construction and the placement of objects within a space.

Sarah Frost was born in 1967 in Detroit and lives and works in St. Louis. She received a Master of Fine Arts degree in sculpture and painting from Southern Illinois University-Edwardsville and a Bachelor of Fine Arts degree in painting from Washington University in St. Louis. Frost has exhibited her work regionally, including at Laumeier Sculpture Park and Museum, St. Louis; Regional Arts Commission, St. Louis; and Cedarhurst Center for the Arts, Mt. Vernon, IL and nationally in New York, Miami and Palm Springs, California. She has also received numerous awards and grants, including the inaugural Riverfront Times Visual Arts Mastermind Award, St. Louis in 2008 and grants from Arts in Transit, St. Louis and the Missouri Arts Council. Most recently she won the Great Rivers Biennial 2010, a grant funded by the Gateway Foundation and solo exhibition at Contemporary Art Museum Saint Louis. She previously exhibited QWERTY in the group exhibition, Debris, at P•P•O•W in 2010.