With 'The Marx Lounge', artist, architect and filmmaker Alfredo Jaar closes in on the role played by ubiquitous market forces in defining the current globalization process, including the legacy of abuses that it engenders. Not only is Marx' influential political thinking and critique of capitalism represented in the exhibition; ample space is also given to a substantial amount of more recent political-philosophical publications. Visitors to the lounge designed by Jaar will succumb to the temptation of this sweeping intellectual display. 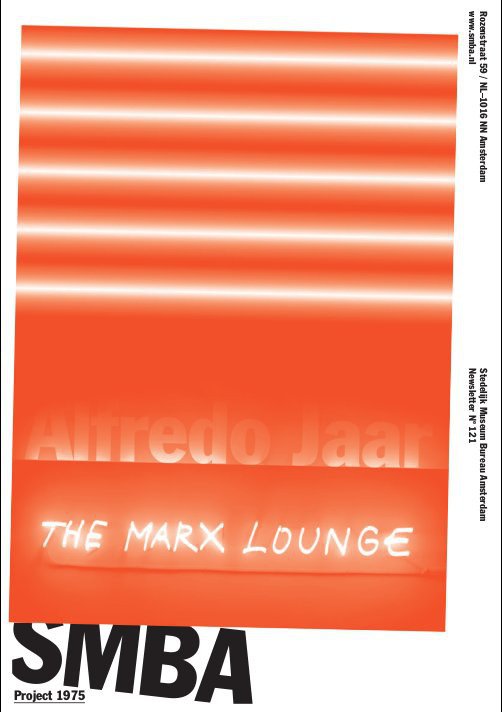 For The Marx Lounge by Alfredo Jaar, the Stedelijk Museum Bureau Amsterdam has been transformed into a reading room with comfortable sofas, reading lamps and a large reading table. The reading table offers a myriad of publications with topics spanning Marxist theory, capitalism, neo-liberalism, post-colonialism, globalization, cultural theory, politics and philosophy. The exhibition is an invitation to the viewer to sit back and become immersed in this wealth of knowledge. The Marx Lounge takes place in the framework of Project ‘1975’ of Bureau Amsterdam.

With The Marx Lounge, artist, architect and filmmaker Alfredo Jaar closes in on the role played by ubiquitous market forces in defining the current globalization process, including the legacy of abuses that it engenders. Not only is Marx’ influential political thinking and critique of capitalism represented in the exhibition; ample space is also given to a substantial amount of more recent political-philosophical publications. With a view to audiences in Amsterdam, the reading matter includes a significant number of relevant publications by Dutch writers. Visitors to the lounge designed by Jaar will succumb to the temptation of this sweeping intellectual display.

Jaar: “I believe an intellectual revolution has been going on for the past 20 or 30 years, but I also see an extraordinary gap between this intellectual revolution and the real world… Is this gap a symptom of the difficulty of apprehending this new knowledge, or is it in the interests of the status quo to keep it the way it is? Besides hundreds of books by and about Marx, you will find political theorists and philosophers like Zizek, Hall, Rancière, Butler, Laclau, Mouffe, Jameson, Bourdieu, Fanon etc. For me these writings offer us models of thinking the world. And that is what I try do as an artist – I create models of thinking. I view The Marx Lounge as a space of resistance, or as David Harvey would call it, a space of hope”. (Art Monthly, January 2011).

The Marx Lounge is a direct response to the financial crisis and to the fundamental questioning of the capitalist system it has elicited. Although the deluge of literature in The Marx Lounge may seem inaccessible at first, on further inspection the book covers with their clearly legible titles crystallise into an explicit image: that of a plea for more attention the (geo)political mores of today. The Marx Lounge is a counterattack, the ‘art of counter information’ to use a phrase of Georges Didi-Huberman, against the dominance of a capitalist practice that has manifested itself in the guise of inequalities worldwide. Jaar advances Marx as the logical basis, but simultaneously leaps ahead to the post-‘70s decades – to the post-colonial era. And again, it is resoundingly evident that the end of colonialism has done little to address the pressing issues surrounding the current world order.

The Marx Lounge premièred at the Liverpool Biennial late last year. For SMBA, the installation has been adapted to the local Dutch situation which is currently typified by a polarisation of the political landscape. As a consequence, The Marx Lounge will also contain a substantial amount of literature by Dutch thinkers, including Bosma, Buruma, Heijne, Hirsi Ali, Leerssen, Scheffer and Schinkel. Their work maps the local and political repercussions of global changes; changes that also ultimately impact upon the visual arts and critical art theory and prompt a re-evaluation of the role of art and art institutions in a post-colonial society. This is also the aim of SMBA’s Project ‘1975’: a reconsideration of the contemporary art institute in a post-colonial context.

Integral to The Marx Lounge is an intensive programme of reading groups, lectures, debates and artists’ presentations. The programme is organised in collaboration with Amsterdam partners such as research group Liberticide, the Internationale Socialisten, the University of Amsterdam and others. The current programme can be found here.

Alfredo Jaar (Chile 1956) has participated in the biennales of Venice in 1986 and 2007, São Paulo (1987, 1989 and 2010) and in Documenta in 1987 and 2002, among others. In addition to the installation in SMBA, work by the artist is currently included in the following exhibitions: ‘Ars 11’ in KIASMA, Helsinki (15 April - 27 November) and at the Sharjah Biennale (16 March - 16 May). In 2012, a major retrospective of his work will be exhibited in diverse venues throughout Berlin. During The Marx Lounge in SMBA, Paul Andriesse Gallery in Amsterdam will present a small selection of works by Jaar. Alfredo Jaar lives and works in New York.
For biographical information, please visit www.alfredojaar.net.

SMBA is the project space of Stedelijk Museum Amsterdam