Art and Confrontation in Latin America 1910-2010. This exhibition presented an overview of confrontational and transgressive artworks featuring 103 artists and some 200 oevres. The artists have explored intricate social and cultural problems by deploying art's intrinsic semantic potential, thus expanding the possibilities of art as language. The show additionally included diasporic artists together with European and North American ones with works that make reference to the exhibition's content. 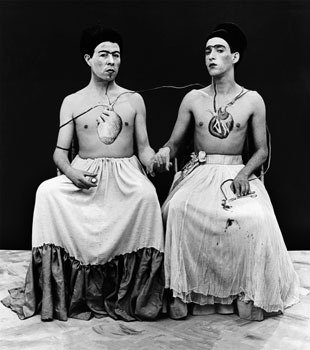 Many artists throughout Latin America have reacted to a variety of intense social emergencies and have used the permissiveness provided by art's aura to posit radical messages and actions. They have explored intricate social and cultural problems by deploying art's intrinsic semantic potential, thus expanding the possibilities of art as language. crisisss… additionally included diasporic artists together with European and North American ones with works that make reference to the show's content. The exhibition foregrounds the global relevance of Latin America's art of dissent, which is exemplary not only because of its diversity, extent and reach, but also due to the plausible and complex drive it has lent to both the political and the aesthetic fields. The exhibition focused on works aimed to social, cultural and artistic confrontation, which remained within the realm of art and aesthetics in a critical way. Few pieces presented were close to pamphlets or strict political illustrations, while, on the other hand, very few transcended the artistic field to become direct social and political action.

crisisss… was not a strictly historical show, nor an exhaustive survey, and it did not pursue a country-by-country presentation. Instead, its curatorial vision sought to construct discourse through the show itself, with the artworks—and not curatorial generalizations—as the starting point. It addressed Latin America in all its complexities and conflicts, and emphasized contemporary problems and positions. Confronting hierarchies and totalizations, the exhibition articulated multiple narratives, drives and cross-sectional dialogues through the relationship the works created among themselves and within the context of the Palacio de Bellas Artes' and the Ex Teresa's spaces. In addition to six exhibition galleries at the Palacio, additional interior spaces, the building's façade, and outdoor spaces came into play and incorporated interventions involving the building. Other areas of the show integrated the museum's famed murals by Orozco, Rivera and Siqueiros by interrelating them with contemporary artworks. A creative, playful education space was open to all audiences at the Bellas Artes venue.

Hélio Oiticica has famously said: "We thrive from adversity." So it would seem that Latin America not only lives along with adversity and crisis, but, in fact, makes it some sort of a lifestyle. Oiticica's mischievous dialectics might serve as a synthesis of both the achievements and the contradictions of the art submitted in the exhibition—and, ultimately, of the exhibition itself.

The Instituto Nacional de Bellas Artes (INBA) embraces priorities such as the promotion of arts, art education and research as well as the preservation and conservation of artwork and buildings of the Mexican artistic heritage from the 20th Century onward. INBA is responsible for 15 museums throughout Mexico City, such as The Museo del Palacio de Bellas Artes, located at the Palacio de Bellas Artes which is a landmark in the heart of Mexico City and houses masterworks of muralists such as—Diego Rivera, José Clemente Orozco, David Alfaro Siqueiros, Rufino Tamayo among others. It is devoted to present national and international exhibitions. Ex Teresa Arte Actual, is another museum that belongs to the INBA, located downtown Mexico, just a few blocks away of Bellas Artes, and its main purpose is to exhibit contemporary and media art.

On this occasion, both institutions had joined efforts to present one of the most complete exhibitions of Latin American art, in order to offer the Mexican and international visitors the opportunity to view a curatorial vision of the social and cultural problems of this geographical zone.