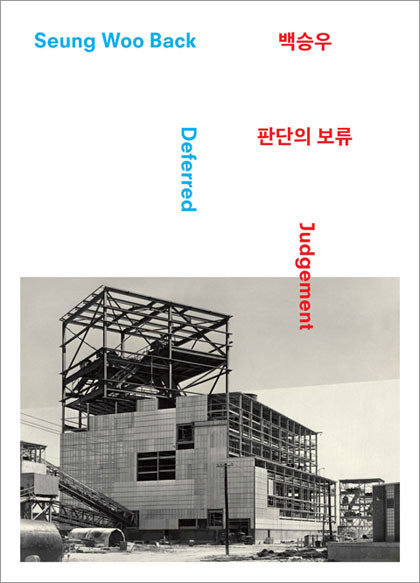 The Artsonje Center is pleased to present Seung Woo Back's Deferred Judgement exhibition from May 13 to July 31, 2011. For this solo exhibition Back will present three new series, Seven Days, Archive Project, and Memento; and two new works, Signboard and Utopia-#032.

With his Real World I, Real World II, Blow Up, and Utopia series Back became renowned for working within the limitations of photography to expose the way it functions as a medium, as well as the invisible structures behind all that we see, visually and conceptually. The issues raised by these previous works where the real is juxtaposed with the staged and imagined ideals are confronted by constructed realities, are taken even further in Back's current exhibition that addresses the norms that govern the way images are perceived and counters the common habit of unquestioningly accepting images as objective representations of reality.

Deferred Judgement operates as a glimpse into Back's investigations of photography and the processes involved in image making. Here, the artist's previous work is established as a departure point for a renewed look at what constitutes an image and the pictures this entails: from the roles of the artist and the viewer, to the printing process or the mechanisms of conveying meaning. Signboard, an image displaying all three titles of his previous series in lights, foregrounds the mental images that titles suggest while showing how these different images compete with each other to convey one overall idea. The notion of different perspectives 'blowing up' a dominant idea is extrapolated to Utopia-#032 where the artist revisits an image from the Utopia series to make the fragmentary nature of all 'pictures' visible by reconfiguring segments of the image, printed in thirteen different countries, into one print.

The three new series Back is showing at the Artsonje Center expand his enquiry into the politics of the gaze into the realm of the everyday. Unlike Blow Up, where previously neglected details in what remained from photos taken and censored in North Korea are brought to prominence, Seven Days consists of images of iconic public spaces in Tokyo that have had all their distinguishing features erased. These 'simplified' images seem simultaneously familiar and strange like a name we think we are about to remember but just stays on the tip of the tongue. Since Memento and the Archive Project are constructed from two separate archives of images Back has been collecting they could also be related to notions of memory, more precisely the way memories are ascribed to things and the notions of authorship this involves. In the case of Memento Back invited different people to select a set of eight images from a collection Back started in the US of over fifty thousand photos from different families. Now that the photographs are detached from the subjects that are portrayed in them, produced them, or were charged with safeguarding their meanings, what narratives can be constructed from these images by strangers? How will the viewers (re)construct what they see?

As suggested by the title Deferred Judgement, this exhibition, in resonance with Back's attitude towards his practice, does not offer answers but rather establishes the means to question the different elements that constitute a picture—be it a photograph, an image or a concept—and the way these elements are all brought together to impart visions of the world. However these visions are not always complete, simple or harmonious. In fact, a striking strength in Back's work is the ability to layer complex and conflicting images that unsettle the viewer into slowly gaining awareness that the apparent seamlessness of an image is deceiving. By fostering this experience, Back's photographs may eventually impel viewers to realize that their role in perceiving an image and grasping meanings from it is not as passive as they might like to believe.

To accompany the exhibition SAMUSO and Hyunsil Culture Studies published Nobody Reads Pictures with support from Maeil Dairies Co., Ltd. This monograph includes an interview by Sunjung Kim and texts by Young Min Moon, Keum Hyun Han, and Hyeyoung Shin. Artsonje Center was founded in 1998 and plays a crucial role in exhibiting and fostering contemporary art in Seoul, South Korea. Aimed at nurturing familiarity with contemporary artistic practice, Artsonje Center is dedicated to the development of a program consisting of exhibitions, screenings, lectures, workshops, publications, an education program and a bookshop/lounge project.

SAMUSO: Space for Contemporary Art was established by curator Sunjung Kim in 2005 and has grown into a curatorial office dedicated to presenting, producing, promoting and nurturing innovative exhibitions; public and educational programs—including lectures, symposia and publications; and collaborations that bring contemporary art to broader national and international audiences and contexts. Platform Seoul (2006–2010), an annually recurring event seeking alternative models and procedures for exhibitions to operate within wider cultural contexts, is emblematic of SAMUSO's projects to date.