The Gustav Metzger's exhibition features the most complete installation to date of artist's series of sculptural installations titled 'Historic Photographs.' This series confronts the viewer with some of the most powerful and tragic images of twentieth-century history, which Metzger has enlarged, obscured, or hidden in a variety of ways. The resulting works invite interaction and provoke powerful physical experiences that transmit the emotional and intellectual weight of history. 'Primitive' is Weerasethakul's most ambitious project: a new multi-platform work consisting of an installation of seven videos and related works. His films use inventive narrative structures to explore intersections between man and nature, rural and urban life, and personal and political memory. 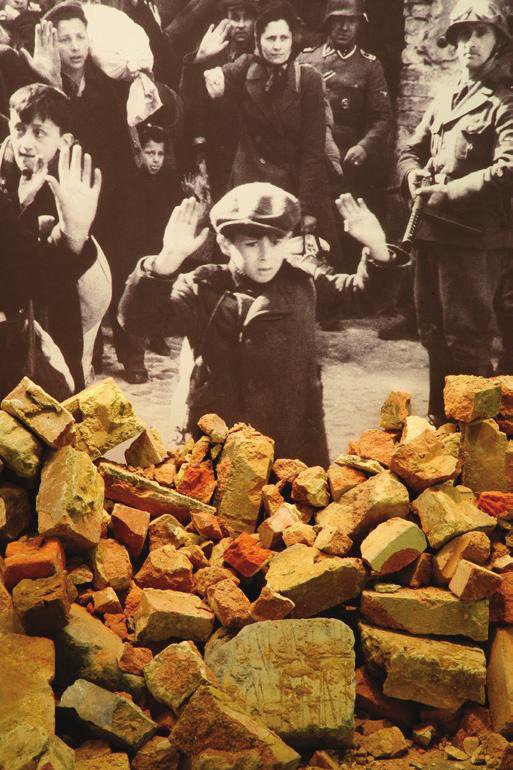 Gustav Metzger: Historic Photographs” is the first US solo museum exhibition of the work of Gustav Metzger and highlights the influential eighty-five-year-old artist and activist’s long engagement with historical trauma and representation. Metzger was born in Nuremberg, Germany in Jerusalem, 8 November, 1990, 1996. Installation view, Generali Foundation, 1926 to Polish-Jewish parents. He and his brother escaped to England, but his parents remained behind and perished in the Holocaust. This first- hand experience of displacement and destruction shaped Metzger’s subsequent outlook on the relationship between art and society. Best known for his theory of Auto-destructive art, pioneered in the 1960s, Metzger has consistently viewed the artist’s role to be one that embraces political activism and seeks radical social change. During the past forty years, his work has touched on issues of nuclear disarmament, war, consumerism, and environmental destruction.

“Gustav Metzger: Historic Photographs” will be on view at the New Museum from May 19–July 3, 2011, and is curated by Massimiliano Gioni, Associate Director and Director of Exhibitions. The exhibition at the New Museum will feature the most complete installation to date of Metzger’s series of sculptural installations titled “Historic Photographs.” This series confronts the viewer with some of the most powerful and tragic images of twentieth-century history, which Metzger has enlarged, obscured, or hidden in a variety of ways. The resulting works invite interaction and provoke powerful physical experiences that transmit the emotional and intellectual weight of history.

Begun in 1990, Metzger’s “Historic Photographs” span a range of historical events including the destruction of the Warsaw ghetto in 1943, the horrors of the Vietnam War, the Oklahoma City bombing, and environmental destruction in contemporary England. Metzger reconfigures the physical conditions of viewing a photograph, obscuring or concealing them from the spectator through a variety of sculptural means. In To Crawl Into—Anschluss, Vienna, March 1938 (1996), a photograph, which depicts a group of VienneseJews being forced to scrub the pavement, lies flat on the ground covered by a sheet. To see the image, viewers are forced to crawl underneath the sheet, and in the process, assume the same prostrate position as the individuals in the photograph. In Historic Photographs: Hitler-Youth, Eingeschweisst (1997/2009), a terrifying image is sealed between two sheets of metal and casually propped up against a wall; in Historic Photographs: Fireman with Child, Oklahoma 1995 (1998–2007) an iconic photograph is hidden behind a wall of concrete blocks. The series as a whole confronts the ubiquitous nature of these iconic photos and constructs a relationship between the viewer and the image that is intimate, performative, and sustaining of historical memory. Metzger’s “Historic Photographs” force the viewer to reengage with historical trauma and speak to the inescapability and inevitability of evil.

Initially trained as a painter in the 1940s and ’50s, Metzger quickly developed more radical strategies towards artistic production. In 1959, Metzger published the Auto-Destructive Art Manifesto, which called for the production of artworks with industrial Gustav Metzger, Historic Photographs: Trang Bang, Children Fleeing South Vietnam, April 1972, 1998. Photograph on aluminum, bamboo screen, lights and timer, dimensions variable. © 2010 Gustav Metzger. Courtesy Serpentine Gallery. Photo: Sylvain Deleu materials and a limited lifespan which, in his words, “reenacts the obsession with destruction, the pummeling to which individuals and masses are subjected.” These ideas were most dramatically realized in his South Bank Demonstration in London in 1961, where sheets of colored nylon were sprayed with hydrochloric acid, burning them to tatters. At the same time, he proposed a theory of Auto-creative art, experimenting with scientific processes to creating light installations and the colorful and immersive Liquid Crystal Environment (1964–65).

Metzger has consistently pushed his fellow artists to take on radical political positions and change their behavior in meaningful ways. Metzger’s project The Years Without Art—1977–1980, a three-year cessation of all artistic activities, sought to encourage other artists to undertake a period of research and reflection on contemporary political problems and social issues. More recently, Metzger’s initiative Reduce Art Flights promoted awareness of the environmental impact of an increasingly global art world by calling for arts professional decrease their dependence on air travel. These works, as well as his more traditional art objects, are concertedly optimistic proposals for living in and improving an increasingly complex and challenging world. Metzger was born in Nuremberg, Germany in 1926. The artist currently lives and works primarily in London. His work was the subject of the recent exhibition “Gustav Mezger—Decades: 1959–2009” at the Serpentine Gallery, London. Solo exhibitions of his work have also been held at the Zacheta National Gallery, Warsaw; Westfalischer Kunstverein, Munster; Lunds Konsthall, Sweden; and the Generali Foundation, Vienna. Metzger’s work included in the 2009 Tate Triennial, the 2008 Yokohama Triennial; the 2007 Skulptur Projekte Münster; and the 2010 Gwangju Biennale, “10,000 Lives.”

Exhibition Support
“Gustav Metzger: Historic Photographs” is made possible by the generosity of the Leadership Council of the New Museum. Additional support provided by the Robert Mapplethorpe Photography Fund.

Opening to the public on May 19, 2011, “Apichatpong Weerasethakul: Primitive” will be the first New York exhibition devoted to the work of internationally acclaimed Thai artist and filmmaker Apichatpong Weerasethakul (b. 1970, Bangkok). Primitive—which is having its American debut at the New Museum—is his most ambitious project to date: a new multi-platform work consisting of an installation of seven videos and related works.

Weerasethakul’s films and videos are often set in the lush forests and quiet villages of the rural Isaan region of Thailand, where the artist spent his childhood. His films use inventive narrative structures to explore intersections between man and nature, rural and urban life, and personal and political memory. Surreal imagery and a sensuous, languid pace give his work a dreamlike quality. Characters shift identities and species fluidly and often reappear in subsequent films. Eschewing Western cinematic references, Weerasethakul’s filmic language draws upon a range of local influences, from Thai folklore to television soap operas and movies. His most recent film Uncle Boonmee Who Can Recall Past Lives won the prestigious Palme d’or Prize at the 2010 Cannes Illuminations Films, 2009. Photograph by Chaisiri Jiwarangsan Film Festival. Weerasethakul’s Tropical Malady won a jury prize at Cannes in 2004; two years earlier, his Blissfully Yours won the top prize in the Un Certain Regard program at the Festival. In 2008, he received the Fine Prize from the 55th Carnegie International, US; and in 2010 he was one of four finalists for the Solomon R. Guggenheim Museum’s Hugo Boss Award.

“Apichatpong Weerasethakul: Primitive” will be on view at the New Museum from May 19 through July 3, 2011. The exhibition is curated by Massimiliano Gioni, Associate Director and Director of Exhibitions at the New Museum. Weerasethakul will be in residence at the New Museum during summer 2011; details will follow this spring The Primitive project was first conceived by Weerasethakul during his research for Uncle Boonmee, the Palme d’Or- winning feature that tells the story of a dying man in a rural Thai village, being cared for by apparitions of his wife and son while he envisions his past lives. The seven interrelated videos at the core of Primitive focus upon the rural farming village of Nabua and the political and social history of its inhabitants. Nabua was the site of clashes between the Thai military and communist sympathizing farmers during the 1960s and ’70s. Brutal repression by the military forced many of the local male farmers into hiding in surrounding forests, leaving the village inhabited primarily by women and children. In Weerasethakul’s new work, parallels are drawn between this social dislocation and an ancient local legend about a widow ghost who abducts any man with the temerity to enter her empire.

Primitive melds documentary and fiction as it follows the activities of a group of male teenagers, descendants of and stand-ins for the lost generation of Nabua’s men. The loose narrative of this work centers upon the building of a spaceship that can link the villagers to the past and future. The centerpiece of Weerasethakul’s installation is a two-channel video that depicts the teenagers appropriating the spaceship as a hangout for drinking, sleeping, and socializing. Other intersecting videos map and illuminate the architecture and landscape of Nabua and capture these young men in moments of creativity, play, and remembrance. The latent history of violence and political strife that haunts Primitive reverberates strongly with recent tensions between the Thai military and the working class of Bangkok, many of whom hail from such rural communities as Nabua.

Apichatpong Weerasethakul was born in 1970 in Bangkok. Initially trained as an architect, he went on to study filmmaking at the School of the Art Institute of Chicago. He has produced six feature length films to date, including Mysterious Object at Noon (2000), Blissfully Yours (2002), Tropical Malady (2004), and Syndromes and a Century (2006). In addition to his feature-length films, Weerasethakul has created a number of videos and installations for museums including Haunted Houses for the 2001 Istanbul Biennial, and Primitive, which was exhibited at the Haus der Kunst, Munich and the Foundation for Art and Creative Technology (FACT), Liverpool in 2009. In 2008, he received the Fine Prize from the 55th Carnegie International, US; and in 2010 he was one of four finalists for the Solomon R. Guggenheim Museum’s Hugo Boss Award.

“Primitive” was commissioned by the Haus der Kunst, Munich with FACT (Foundation for Art and Creative Technology) and Animate Projects, London. Produced by Illuminations Films and Kick the Machine Films.

Exhibition Support
“Apichatpong Weerasethakul: Primitive” is made possible by the generosity of the Leadership Council of the New Museum. Additional generous support provided by the New York State Council on the Arts and the Toby Devan Lewis Emerging Artists Exhibitions Fund.

About the New Museum
The New Museum is the only museum in New York City exclusively devoted to contemporary art. Founded in 1977, the New Museum was conceived as a center for exhibitions, information, and documentation about living artists from around the world. From its beginnings as a one-room office on Hudson Street to the inauguration of its first freestanding, dedicated building on the Bowery designed by SANAA in 2007, the New Museum continues to be a place of ongoing experimentation and a hub of new art and new ideas.