The artists assembled in this exhibition centred on the works of Bernard Bazile and Simona Denicolai & Ivo Provoost focus on infiltrating systems, occupying zones of temporary actions and inflecting the process of certain realities. Also on view Bernard Bazile (Brillances, 2011), in the context of the Laboratory space brain / Station 6. 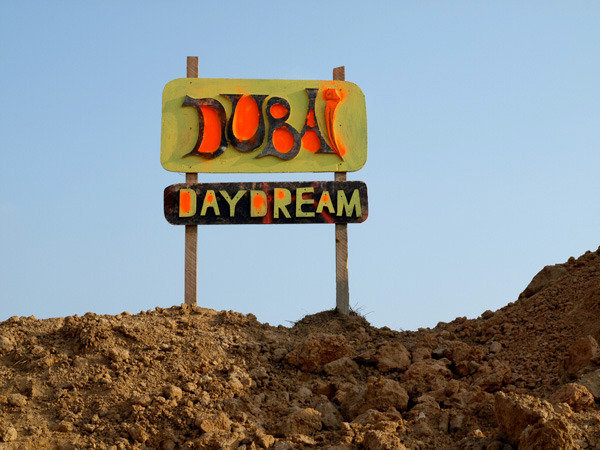 Yes, we don't is a paradoxical affirmation, a suspended 'No' that openly assumes its absence of illusion and destination. It is not the resistance of Bartleby who with the famous phrase 'I would prefer not to' neutralised reality to upset the norms. Yes, we don't is more a playful and transgressive attitude, sometimes skirting the absurd, the slogan of a posture in which suspension is affirmed before a decision about possible destinations and measurement of the amplitude of its reception...

Yes, we don't is formulated in an unprecedented multipolar, virtual and globalised period, imprinted with the acceleration—without limits and without reference points—of data pertaining to both the media and economics and to science and culture. Our perception of time is therefore dislocated, precipitated and tense. Time is no longer a homogenous notion but fragmented in the relation of the subject to the world and in the complex relationships that we have with the real.

How can we interact with our times? Is it still possible? What are the means available, if not upsetting then at least occupying and infiltrating the present? Is it still possible to talk in terms of territories that are neither those of particularism nor the abstract space of globalisation, nor above all those of general support of the politically correct? The artists assembled in this exhibition centred on the works of Bernard Bazile and Simona Denicolai & Ivo Provoost focus on infiltrating systems, occupying zones of temporary actions and inflecting the process of certain realities.

The point today is less that of condemning and documenting than of marking a critical space and organising the appearance there of multiple forms of insubordination. The 'public thing' (political and economic power, the street and daily life, the world-wide web and the media) is thus material for transformation, ingestion, deviation, transcoding, individual and collective micro-actions and so forth. More than a support for credulous involvement, language is used as a transverse tool at the service of absurdity and desired ambivalence.

Combining energy and irony, these artists weave subtle strategies that, while they affirm—'Yes'—, display a degree of negativeness—'we don't'—clearly showing their subversion, now, and quickly !

Initiated by the artist Ann Veronica Janssens and Nathalie Ergino, director of the Institut d'art contemporain, the Laboratory space brain uses experiments in art to explore theoretical and practical research linking space and the brain. This interdisciplinary laboratory will assemble the thoughts and experiences of artists, scientists (working in neuroscience, astrophysics, etc.), philosophers, anthropologists, art theoreticians and historians.