Between Crisis and Possibility. Taking the term foreclosure as a point of departure, this group exhibition examines processes of exclusion by which certain narratives and forms of subjectivity are privileged over others. Ranging from photography and film to performance, the artworks challenge the politically paralyzing rhetoric of crisis and explore possibilities for alternative practices within everyday experience. 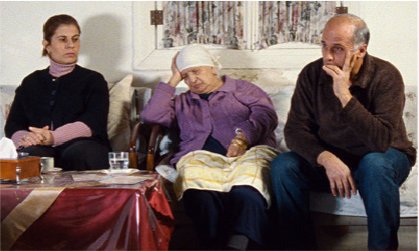 Although foreclosure is now associated primarily with the collapse of the subprime mortgage market and the current financial crisis, the term has other implications. From a social and psychoanalytic perspective, foreclosure connotes the rejection and exclusion of particular experiences, memories, and narratives. This exhibition is situated at the nexus of these multiple meanings. Cutting across the systemic and the subjective, the spatial and the psychic, the exhibition engages the politically paralyzing rhetoric of crisis by positing and negotiating alternative possibilities. A multilayered curatorial approach is employed, integrating the gallery space with a series of public platforms. These include discussions, performances, and film screenings, interrogating different interpretations of the term foreclosure. Together, these platforms propose a critical reevaluation of the complex field that the term foreclosure demands.

Tuesday, June 7, 2011 at 7 pm
The Kitchen Auditorium, 512 West 19th Street, New York, NY
As part of this exhibition, Tania Bruguera’s Immigrant Movement International (IMI) presents a public performance that will bring together the project’s multiple audiences and participants within The Kitchen’s auditorium. Through this performance, Bruguera seeks to address the foreclosure of immigrants from political representation.
IMI is an ongoing long-term project that takes the form of a socio-political movement currently headquartered in the neighborhood of Corona, Queens. IMI engages with local immigrant community groups and political organizations through a series of public workshops, events, and actions.
This program is free of charge and open to the public; seats will be available on a first-come, first-serve basis.

PUBLIC PLATFORMS
The main ideas and questions put forth by the exhibition Foreclosed, Between Crisis and Possibility are expanded through this series of public platforms and events:
Forgotten Spaces: A Film Screening and Conversation with Allan Sekula and David Harvey

Sunday, May 15, 2011 at 4 pm
The Cooper Union, Rose Auditorium, 41 Cooper Square, New York, NY
This event features the U.S. Premiere of The Forgotten Space (2010), an award-winning film by Allan Sekula and Noël Burch. This screening will be followed by a conversation between Allan Sekula and geographer David Harvey, introduced by Anthony Vidler, Dean and Professor of the Irwin S. Chanin School of Architecture at The Cooper Union, New York.
Moving between the four port cities of Bilbao, Rotterdam, Los Angeles, and Hong Kong, The Forgotten Space excavates the maritime world as a space that is often foreclosed from mainstream awareness. This film reinscribes the sea as a crucial site within complex networks of global capitalism. Sekula and Burch intertwine this with narratives of the stories of people working in the world’s major harbors. The conversation following the film will explore the relationship between capitalism and uneven geographical development.
This program is free of charge and open to the public; seats will be available on a first-come, first-serve basis. Doors open at 3:30 PM.

Tuesday, May 31, 2011 at 7pm
The Kitchen, 512 West 19th Street, New York, NY
This discussion will examine connections between the subprime mortgage crisis in the United States and the psychic and social experience of home loss. It will begin with a short screening of Kamal Aljafari’s film Port of Memory (2009), followed by a conversation between Harriet Fraad (Psychotherapist), Ingrid Gould Ellen (New York University), and Maggie Russell-Ciardi (Tenants & Neighbors).
What is the relationship between psychic foreclosure and property foreclosure? How can we recognize the ways in which these two conditions intersect in everyday life? Bringing together perspectives from different fields of expertise, this platform draws generative connections between abstract understandings of psychic foreclosure and local experiences of displacement or home loss.
This program is free of charge and open to the public, based on a first-come, first-serve basis. Capacity is limited, we kindly suggest an early arrival.

Saturday, June 11, 2011 at 3pm
The Kitchen, 512 West 19th Street, New York, NY
This discussion explores urban space as a site of contestation and possibility. It will begin with a screening of Yto Barrada’s video Beau Geste (2009), followed by a conversation between Tania Bruguera (Artist), Peter Marcuse (Columbia University), Damon Rich (Center for Urban Pedagogy), and Radhika Subramaniam (Parsons The New School for Design).
How does the current economic crisis reconfigure urban space, specifically in New York? How do contemporary artistic and urban practices engage with and impact the various social imaginaries of the city? Bringing together the disciplines of urban planning and design with artistic and curatorial practices, this platform considers the city as a stage of conflict, desire, and imagination.
This program is free of charge and open to the public, based on a first-come, first-serve basis. Capacity is limited, we kindly suggest an early arrival.

All events will be conducted in English and each venue is physically accessible.
These events may be photographed, videotaped, or otherwise recorded. By attending this event, you grant the Whitney Museum permission to use photographs, and/or audiovisual recordings in which you appear for archival, documentary, publicity advertising, or other purposes. Immigrant Movement International is co-sponsored by CREATIVE TIME and the Queens Museum of Art.