Salcedo exhibits a completely new work, comprising 69 sculptural units. Under the title, Plegaria Muda, these individual units fill up the entire Turbine hall. They asks us to reflect on the grey zones that always appear in the murky margins of our societies; zones in which the roles of perpetrator and victim tend to merge and where a human life more easily can be degraded into nothing. It stems from a three-year-long research of the ghettoes of South East Los Angeles. 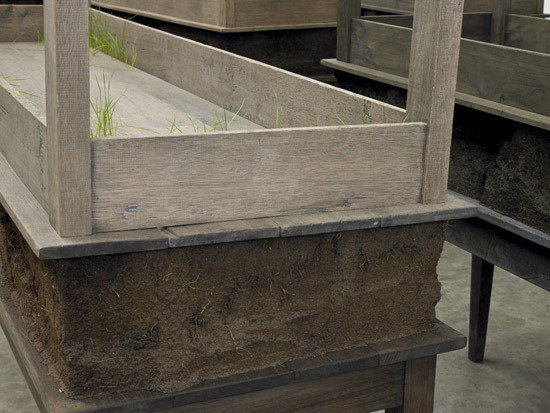 Curated by Joa Ljungberg, Curator at Moderna Museet Malmö and Isabel Carlos, Director of CAM-Fundação Calouste Gulbenkian and Lead Curator for the tour of Plegaria Muda

Doris Salcedo is one of the foremost sculptors of our time and Moderna Museet Malmö is proud to present her first solo exhibition in Scandinavia. She exhibits a completely new work, comprising 69 sculptural units. Under the title, Plegaria Muda, these individual units fill up the entire Turbine hall with an, at times elusive, at times penetrating presence.

The work of Doris Salcedo has engaged people all over the world. Like few other artists, she has succeeded in providing visual language to abstract feelings of traumatic loss and suppressed grief. A pair of shoes from a missing person, or ordinary household furniture – such as a chair, a table or a bed – have, by her hand, been transformed into alternative memorials, impregnated with emotions of painful absence, while encapsulating a traumatic loss of human life.

In recent years, Doris Salcedo has been increasingly noted for her monumental installations and architectural interventions. For the 2003 Istanbul Biennial she filled the void after a demolished building with nearly 1,600 densely packed chairs. Four years later, in 2007, her work Shibboleth – a 167-metre-long crack through the floor of Tate Modern – stunned both museum visitors and the entire international art scene, while raising questions of borders, racial hatred and exclusion.

The new work, Plegaria Muda, asks us to reflect on the grey zones that always appear in the murky margins of our societies; zones in which the roles of perpetrator and victim tend to merge and where a human life more easily can be degraded into nothing. It stems from a three-year-long research of the ghettoes of South East Los Angeles, but it is also a direct answer to repeated atrocities committed by groupings within the Colombian army between the years 2003 and 2009.

Plegaria Muda may be translated as “Mute Prayer” and it responds to acts of violence with a contemplative stillness. It does not tell stories of individual victims, but in silence it gives voice to a collective trauma that has caused festering wounds throughout an entire social fabric. Removed from a private, anonymous invisibility to the very centre of this piece is an abysmal grief - a grief, supressed and unprocessed, that can find no place wherever violent death is reduced to complete insignificance.

Born in Colombia in 1958, Doris Salcedo lives and works in the capital Bogotá. Her work is intimately intertwined with her native country’s conflict-ridden history and present, but it is also based on thorough investigations of human conflicts in other parts of the world and at different times in history. In a language that is subtle and poetic, yet of shattering power, she explores violence as a universal phenomenon and creates physical manifestations of the unspeakable wounds that it leaves behind.

Since the mid-1980s, Doris Salcedo has exhibited extensively with solo exhibitions at amongst others The New Museum of Contemporary Art in New York (1998), San Francisco Museum of Modern Art (1999), Camden Arts Center i London (2001), Castello di Rivoli in Turin (2005) and Tate Modern in London (2007). Doris Salcedo has also participated in a large number of international group exhibitions and events, including Documenta 11 in Kassel (2002) and the 8th Istanbul Biennal (2003). In year 2010 Doris Salcedo was awarded the prestigious Velázquez Visual Arts Prize.

The exhibition is supported by: E.ON.

25 May, 7 pm
Art as a memorial in Colombia
Ana María Bermeo, museologist and museum host at Moderna Museet Malmö, puts Doris Salcedo’s work in the context of their shared native country – Colombia. The history of Colombia could be told as a series of repeated – and interconnected – conflicts and acts of violence, with countless victims in their wake. Victims without a voice, who have disappeared, been killed, and never buried. To ensure that these atrocities and the dehumanisation of the victims are not forgotten Doris Salcedo has chosen to remain in her country. She currently lives and works in the capital city, Bogotá. In Swedish.

The press preview will take place on Friday, 20 May, at 10-11 am, at Moderna Museet Malmö. The exhibition will be introduced by curator Joa Ljungberg, in the presence of the artist.

21 May, 3 pm
Artist talk: Doris Salcedo
On the opening day of the exhibition Plegaria Muda, curator Joa Ljungberg talks to Doris Salcedo about her artistry. In English.