In his latest neon installation "Texts for Nothing (Waiting for -)", with which he begins his exhibition in the large entrance hall, Joseph Kosuth refers to the Irish writer Samuel Beckett: in a completely dark room, the observers encounter shining white neon texts, which quote from the play Waiting for Godot and from the prose work Texts for Nothing. Another new work realized for this show belongs to the series of works entitled "Text/Context". Here, Kosuth refers to the language of advertising. 'Visionary Collection Vol. 15: Minimal-Maximal' presents works from the museum's collection, including permanent loans from the Mondstudio collection. 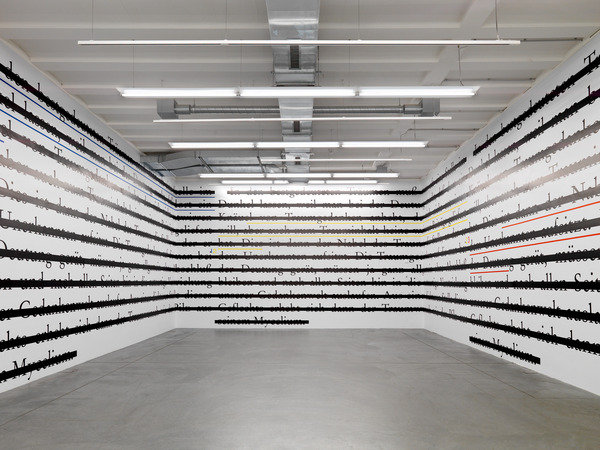 JOSEPH KOSUTH at Haus Konstruktiv
"Texts for Nothing (Waiting for–)" Samuel Beckett, in play in connection with "A History of Installations, 1965–2011"

Joseph Kosuth, born 1945 in Toledo (Ohio), is an icon of American conceptual art. He deals with language and verbal imagery like almost no other artist: his works, which he began developing in the mid-1960s, seduce us into seeing more, thinking more and fantasizing more.
In what is a major anniversary year for the Zurich museum Haus Konstruktiv, as its supporting foundation was founded 25 years ago, Joseph Kosuth's comprehensive solo exhibition addresses this foundation's third area of commitment, the mediation of conceptual art, because this is precisely what establishes the link between the traditional themes of concrete art and the responses that it evokes in a young generation of artists.

In his latest neon installation "Texts for Nothing (Waiting for –)", with which he begins his exhibition in the large entrance hall at Haus Konstruktiv, Joseph Kosuth refers to the Irish writer Samuel Beckett: in a completely dark room, the observers encounter shining white neon texts, which quote from the play Waiting for Godot and from the prose work Texts for Nothing. However, while Beckett often addresses the uninterpretable, Kosuth, conversely, attempts to visualize the emergence of meaning. In this dark room, there is also a light box to be seen, with a black-and-white reproduction of the painting Two Men Contemplating the Moon by Caspar David Friedrich: this picture is supposed to have been a major inspiration for Beckett with regard to his play Waiting for Godot.

Another new work realized for the exhibition in Zurich belongs to the series of works entitled "Text/Context". Here, Kosuth refers to the language of advertising. When he began this series, he wrote his own text for it – the first time that he had done so. The self-written text passage (translated into three languages) is to be read in two different public contexts: on the street and in an art context. On the street, the texts are initially presented anonymously in the context of advertising in public locations in Zurich provided by the poster advertising company APG, in Wallisellen and in the Stadelhofen railway station. The same poster seen on the billboards is presented again in Haus Konstruktiv as part of the exhibition, again in the context of other outdoor views.

For the first time since documenta IX in the year 1992, almost 20 years ago, the installation "Passagen-Werk" (presented back then in the Neuen Gallery) can also be seen again. With his documenta presentation in mind, Kosuth selected quotes which he found relevant upon contemplation of the exhibition as a whole. These were screen-printed onto black cloths and were intended to cause the art tourists, swarming through documenta in their role as "flaneurs", to stop and think. In Zurich, as was also the case back then in Kassel, the cloths are hung over works from the museum's own collection.

Against traditional notions of the artwork
In the context of artistic protest movements which, at the start of the 1960s, rebelled against the art world's traditional notions of the artwork, a new art movement formed under the name "conceptual art" coined by Sol LeWitt, rejecting traditional art forms like painting and sculpture and making the very concept of the artwork the subject of its art. Within this movement, Joseph Kosuth adopted a radical position: he believes that the idea on which an artwork is based is already an object, and can therefore be visualized. Between 1966 and 1968, Kosuth entitles all works "A.A.I.A.I.", the initials of the phrase "Art as Idea as Idea".
From the 1970s onward, works appear in which Kosuth also visualizes texts or sentence fragments from philosophy, literature and art theory. Most of the selected excerpts are closely related to the specific place where the works are presented. These works also make it clear that the work is only given meaning when actively perceived by the observer.
Kosuth's artistic results do not present themselves as artifacts, but rather as descriptions of an artwork, aided by texts, diagrams, plans, photographs and films.

For their generous financial support of the Joseph Kosuth exhibition "Texts for Nothing (Waiting for–)", we would like to thank the following: the Art Progressive Foundation; ewz, Zurich; Michael and Ellen Ringier, Küsnacht; Ernst Schweizer AG, Metallbau (project donor) and private sponsors who wish to remain anonymous.

Works from the Haus Konstruktiv collection, including permanent loans from the Mondstudio collection, which have been part of the museum's collection since the end of 2009.

The Mondstudio collection is an internationally distinguished collection of Modern art (focused on painting) from the mid-20th century to the present day. Since 2009, key works from the collection, e.g. by Andy Warhol, John Wesley, Rémy Zaugg, Stephan Baumkötter, Matthew McCaslin, Jessica Stockholder and Steven Parrino, have been added to the Haus Konstruktiv collection as permanent loans. As part of the exhibition series “Visionary Collection”, these works are now to be exhibited under the title “Minimal–Maximal” and positioned in relation to other pieces. “Minimal–Maximal” picks up on what is already a theme of Joseph Kosuth's solo exhibition: the relationship between what an artwork shows and what it can trigger upon further engagement with it.

The Mondstudio collection
With passion and expert knowledge, Adrian H. Koerfer began setting up the Mondstudio collection in 1982 and it is now seen internationally as one of the most important collections of contemporary painting. The collector began with works by Günter Umberg and Joseph Marioni, i.e. two artists who practice so-called “radical painting”, which Koerfer himself described as sensuous and inspirited. “To reduce it to a common denominator: I find that abstract painting possesses more depth than the representational. In my opinion, representational painting is often less inspirited than the abstract.”
One remarkable, and indeed unique, aspect of the collection, is that it not only portrays the international development of abstract / representational issues through to minimalistically reduced themes in painting, but it also shows a precise “curatorial view” of the medium: without following fashionable trends, the collection now comprises more than 650 artists, from the mid-20th century to the present day; from Herbert Brandl and Alex Katz to David Reed and Tamara Grcic, from Andy Warhol to Gerhard Richter and Monika Beer. A selection from the collection has since been exhibited in Kunstmuseum Bonn, the Museum of Fine Arts Bern and Kunstmuseum Wiesbaden.