'Painterly Abstraction, 1949-1969 - Selections from the Guggenheim Collections' explores the most important trends in US and European art in the 1950s and 1960s, revealing the surprising affinities in art on both continents. The movement was known in its various manifestations as Gesture Painting, Lyrical Abstraction, Matter art, and Tachisme. Included in the exhibition are works by major artists like Jackson Pollock, Willem de Kooning, Ellsworth Kelly, Robert Rauschenberg, Karel Appel... 'Learning Through Art 2011' present fresh and original perspectives from young artists aged 6 to 12. 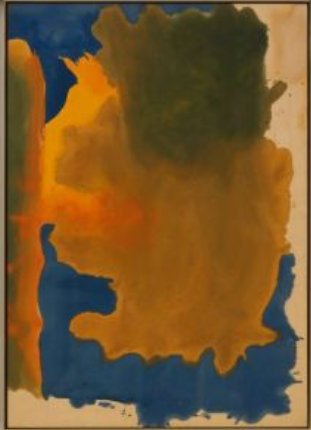 Based mainly around works in the Solomon R. Guggenheim Foundation and the Guggenheim Museum Bilbao Collections, this exhibition explores the most important trends in US and European art in the 1950s and 1960s, revealing the surprising affinities in art on both continents.

In the devastating aftermath of World War II and under the wing of Existentialist philosophy, European artists turned to expressive hybridization and synthesis as opposed to the utopian and experimental values that had marked the artists of previous generations. For those artists in Franco’s Spain and Eastern Europe still oppressed by political and aesthetic tyranny, works of art signified political liberation. Art Informel, or art without form, encompasses a wide array of abstract practices and painterly methods that emerged in this postwar era. Rejecting the last strongholds of classical humanism and its most significant artistic principles, such as tonal harmony, balance, and unitary composition, Informel painting instead embraced the expression of artistic freedom. The movement was known in its various manifestations as Gesture Painting, Lyrical Abstraction, Matter art, and Tachisme (from the French tache, meaning spot or stain). Such artists as Alberto Burri in Italy, Jean Dubuffet in France, and Antoni Tàpies in Spain applied materials other than oil paint to their canvases, while others explored a number of approaches they considered to be more scientific, objective, and interactive in nature, in particular monochrome painting and Kinetic Art, as demonstrated in the work of Yves Klein, Piero Manzoni, and Jean Tinguely.

Painting in the United States was simultaneously developing toward a gesture-based, highly expressive style. Like the artists of Art Informel, the Abstract Expressionists did not have one style or universal theme. However, an interest in the process and essentials of making art, as well as an overwhelming trend toward abstraction influenced by artists’ unconscious or emotions, became the driving force venid the movement. Action Painting sought to unite form and emotion through innovative methods of applying paint—pouring and splattering, as well as using a brush—in an effort to emphasize the act of painting and the painted surface, and is exemplified by the work of Willem de Kooning and Jackson Pollock. Others, such as Robert Motherwell and Mark Rothko, employed large planes of color to evoke spiritual states.

Drawn primarily from the collections of the Solomon R. Guggenheim Foundation and the Guggenheim Museum Bilbao, this exhibition reveals the striking affinities between artists working continents apart in the burgeoning Cold War era.

In the United States, the postwar period saw the appearance of its first internationally influential avant-garde movements, with the appearance of Abstract Expressionism, Colorfield painting, and Pop Art. In Europe, the CoBrA group, the Tachisme, and Art Informel shared Abstract Expressionism's tendency to reject traditional forms of composition in favor of more gestural painting.

At the end of every school year an exhibition of the students' artwork is held at the Guggenheim Museum Bilbao. Gallery 103 B will delight visitors with a surprising blend of imagination, endeavour, fun and learning. The exhibit will present fresh and original perspectives from young artists aged 6 to 12. Imagine the work of 196 artists in a single gallery! The participants will probably never forget that thousands of people once came to see the artwork of the youngest artists ever to have their work displayed at the Museum.

Learning Through Art has its roots in the Solomon R. Guggenheim Museum New York. The program was founded in 1970 by patron of the arts Natalie K. Lieberman in response to the elimination of arts education in New York City's public elementary schools. In 1998 the Guggenheim Museum Bilbao adapted the arts program to the needs and interests of Basque public primary schools. The project is a collaboration between the Museum and the Basque Department of Education's Office of Innovation in Education, with sponsorship from the BBK. Learning Through Art has been operating as a successful education and art program in the Basque Country since that time. Over the years, LTA has reached more than a thousand schoolchildren and a hundred teachers from all stages of primary education.

Method
Schoolchildren learn in many different ways: by listening, observing, talking, acting and creating. They do all of these things in the course of the creative process while also learning to think critically and to plan and develop a project from start to finish. The program breaks down barriers between school subjects and academic disciplines and encourages schoolchildren to see the world in a creative and personal way. Art becomes a tool for discovering, exploring and interpreting reality. They also develop writing and language skills, as well as building appreciation for their own work and the work of others. Since schoolchildren are more receptive to learning through artistic activities, the workshops are highly effective with students who have difficulties following traditional learning methods. The workshops offer a wide range of disciplines: photography, painting, sculpture, video, events, theatre, music, digital art ... The program is conducted in 90-minute sessions once a week at the school over a period of 20 weeks.

Teachers
After the teachers identify the objectives they want to achieve, and the skills and attitudes they want to consolidate, artists and Museum educators work together to design a series of workshops integrated into educational units. Each program is unique and custom designed to develop the interests and skills of the schoolchildren and to reinforce any area of school curriculum. Collaboration between artists and classroom teachers is essential since the two mutually support the endeavours of the other. In 2011-11 thirteen teachers opened their classroom doors to Learning Through Art: Esther Abad, Lutxi Alonso, Mª Jesus Casajú, Azucena Corro, Mª Pilar Fernández, Feli Gómez, Mª José Gómez, Simona Izquierdo, Rosa Jusué, Raúl Lopez de Munain, Karmele Paz, Isabel Ruiz and Nagore Unanue.

Artists
The role of the artists is fundamental. They are the ones who pump energy and life into the children's work, helping them to link conceptual thinking to artistic creation and apply them to specific subject areas.
Elssie Ansareo, Nadia Barkate Naia del Castillo, Ibon Garagarza, Iñaki Gracenea, Joxerra Melguizo, Manu Muniategiandikoetxea ,Jorge Rubio and Ibon Saénz de Olazagoitia are the artists who visit the schools and share their ideas. But the true protagonists in this creative adventure are the children themselves. With their endless excitement and energy and their unfailing ability to surprise, they are the ones who inevitably reinvent the initial ideas put forward to come up with unexpected solutions all their own.

The artists know that their role is to propose journeys whose final destination only time will tell. Every year Learning Through Art embarks on a new adventure.

Students
The schoolchildren become explorers in unchartered territory while at the same time discovering the joy of creating unique objects of art. They also take great pleasure in putting their creations on display for other people to enjoy. In addition, the workshops give the children the opportunity to learn the importance of teamwork and communication.

In 2010-2011 nine schools with a 196 students participated in the program: the 6th grade class at Zuazo in Barakaldo; 6th grade at San Lorenzo in Ermua; 4th at Pío Baroja in Txurdinaga; 3th at Juan Ramón Jiménez in Cruces; 5th at San Ignacio in Bilbao; 5th and 6th grades at Mendiola in San Sebastian; 5th y 6th at Ramon Bajo in Vitoria-Gasteiz; 5th at Samaniego in Vitoria-Gasteiz; 1st and 2nd at Zabaleko in Amurrio.

Guggenheim Museum
Avenida Abandoibarra, 2 - Bilbao
Hours: Tuesday to Sunday: from 10 am to 08 pm