Act One is a solo exhibition by Marc Camille Chaimowicz, the influential London-based artist who was born in post-War Paris. New works in film, slide projection and sculpture evoke the early Genet. Her exhibition hosts the work of others, including 6 major sculptures and paintings from the 1950s by Alberto Giacometti, other guest artists are Tariq Alvi, Lukas Duwenhogger, Mathilde Rachet and Wolfgang Tillmans. Act Two reflects on Genet's later life; the art works include a major new commission by Lili Reynaud-Dewar, a film set in a Palestinian refugee camp by the Otolith Group, and the political murals of Emory Douglas, Culture Minister of the Black Panther Party. 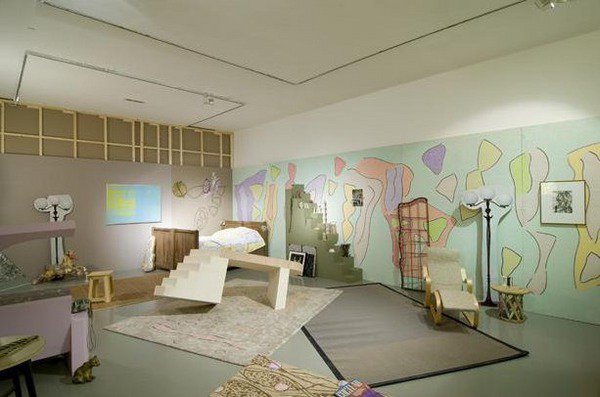 Nottingham Contemporary presents a major exhibition inspired by the life and work of Jean Genet (1910 – 1986), the celebrated poet of revolt.

Act One is a solo exhibition by Marc Camille Chaimowicz, the influential London-based artist who was born in post-War Paris. New works in film, slide projection and sculpture evoke the early Genet – the orphan, thief, prisoner, army deserter, vagabond and prostitute who turned brutal experience into sexually fevered poetry. Featured “guests” in his dreamlike, ornate environments include Alberto Giacometti.

Chaimowicz’s exhibition,refers to Genet’s first play The Maids (1948), about two servants who revolt against their mistress, and features a new film inspired by it. His installation is in the form of a strange and exquisite domestic interior that offers a mental image of a space Genet might wish to inhabit.

The Chaimowicz exhibition hosts the work of others, including six major sculptures and paintings from the 1950s by the great Modernist sculpture Alberto Giacometti, generously lent by the Fondation Giacometti, Centre Pompidou and Tate. These famous works will be seen as never before, and include a portrait of Genet by his great friend Giacometti, as well as furniture designed in the 1930s. Picasso called Genet’s essay on Giacometti the greatest essay on an artist. Other guest artists include Tariq Alvi, Lukas Duwenhogger, Mathilde Rachet and Wolfgang Tillmans. Genet wrote his five novels while in prison – loans from Her Majesty’s Prison Service Collection help to evoke this.

Act Two reflects on Genet’s later life – particularly as an advocate for the Black Panther Party, and of the Palestinian cause. The art works include a major new commission by Lili Reynaud-Dewar, a film set in a Palestinian refugee camp by the Otolith Group, and the political murals of Emory Douglas, Culture Minister of the Black Panther Party, as well as artefacts relating to Genet himself.

Act Two reflects Genet’s life since the late 50s, beginning with his controversial anti-colonial plays, The Blacks (1958) The Screens (1961). He became an advocate and spokesperson for the US Black Panther Party at their express invitation, visiting the US in 1970 and supporting Bobby Seale, Angela Davis and George Jackson and spent the next two years living alongside the young Palestinian fedayeen in Jordan. He was the first Westerner to witness the immediate aftermath of the massacres in the Palestinian refugee camps of Sabra and Shatila in Beirut in 1982, powerfully recalled in his last great essay, Four Hours in Shatila.

Within the exhibition Lili Reynaud-Dewar’s major installation has four black, pink and white “walls” made from blankets, reminiscent of nights under the stars in the desert. It features coloured mannequin limbs, a child’s Black Panther uniform and a voice reading from Genet’s Prisoner of Love. Latifa Echakhch has covered the galleries with numbers drawn in charcoal directly on the wall that refer to the unrealised UN resolutions on Israel and Palestine. Mona Hatoum’s art works are a table full of glazed ceramic hand-grenades in various colours and a traditional Arab scarf, a keffiah, made of human hair. The exhibition also has two large murals by Emory Douglas, and a selection of his posters, as well as an extensive collection of Panther Party newspapers.

The film Nervus Rerum by the Otolith Group was made in Jenin refugee camp – the sound track partially deriving from Genet’s Prisoner of Love. Situationist Gil J Wolman’s “scotch art” canvases of the late 60s allude to conflicts of the time – Maoism, May ’68 and the Arab-Israeli War, among them.

Genet’s effect on culture has been extensive and wide-ranging. He was lionised by the Paris avant-garde of the 1940s, and received a presidential pardon from prison after a letter signed by Cocteau, Jean-Paul Sartre and Picasso, among others. In the 60s and 70s his associates included Michel Foucault, Jacques Derrida and Angela Davis. He also secretly met the Palestinian leader Yasser Arafat who gave him a pass to all the Palestinian bases. His erotic inversion of traditional morality and aesthetics has also influenced a strong strand of popular culture, particularly reflected in its music, from David Bowie’s iconic Jean Genie onwards. Genet lived many lives, but remained a writer in the revolt to the end.

The exhibition is supported by the National Lottery through Arts Council England, Institut Francais, Fluxus, Hiscox, The Henry Moore Foundation, Norfolk and Norwich Festival 11, Norwich University College of the Arts and Plus Tate.