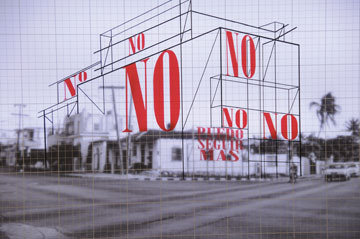 La enmienda que hay en mi' (Making Amends). Inspired by his native Havana, Cuban artist Carlos Garaicoa is known for his explorations of social and political issues in the context of the built environment with a particular interest in the failure of modernism as a catalyst of social change, human rights, and the decay of twentieth-century utopias. This exhibition first opened in 2009 at the National Museum of Fine Arts during the 10th Havana Biennial in Havana, Cuba, and was curated by Corina Matamoros, curator of Contemporary Cuban Art at the National Museum of Fine Arts, Havana. Its U.S. debut was at the University of South Florida Contemporary Arts Museum in 2010, cocurated by Matamoros and Noel Smith, curator of Latin American and Caribbean Art, University of South Florida Institute for Research in Art. At the Johnson Museum, the exhibition is supported in part by a grant from the Cornell Council for the Arts. (Image: The Word Transformed, Part 1 - La palabra transformada, parte 1 - detail, 2009)