The House Without the Door

Finding inspiration in Emily Dickinson's poem Doom is the the Door, this exhibition considers the idea of the home as a charged psychological space. The works on wiev are characterized by their ability to explore myriad issues related to interiority and domesticity -such as agoraphobia, self-imprisonment, domestic abuse, and memory - through understated yet compelling gestures. Artists: Francis Alys, Louise Bourgeois, Philip-Lorca diCorcia, Robert Gober, Mona Hatoum, Thomas Ruff, Luc Tuymans, Jeff Wall, Rachel Whiteread.... 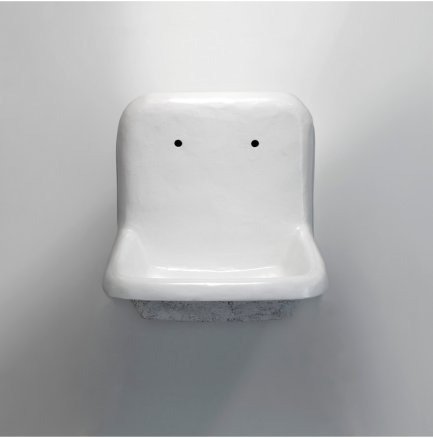 Doom is the House without the Door —
‘Tis entered from the Sun —
And then the Ladder’s thrown away,
Because Escape — is done —

Finding inspiration in Emily Dickinson’s poem Doom is the the Door, this exhibition considers the idea of the home as a charged psychological space. Frequently identified with her family’s home, where she produced much of her work, Dickinson has been described as an “eccentric recluse, wedded to her interiority.” Feminist scholar Diana Fuss has argued that for Dickinson “interiority was a complicated conceptual problem, continually posited and reexamined in a body of writing that relies heavily on spatial metaphors to advance its recurrent themes.”1 Similarly, the works in The House Without the Door are characterized by their ability to explore myriad issues related to interiority and domesticity—such as agoraphobia, self-imprisonment, domestic abuse, and memory—through understated yet compelling gestures.

In many of the works on view, the home is a site that produces mania, anxiety, and desperation. Among them, Gregor Schneider’s Totes Haus ur, Rheydt (2000)—translated from the German as “Dead House”—documents the artist’s former family home in Rheydt, Germany, where in 1985 he began compulsively remaking its interior into a veritable labyrinth by building rooms within rooms, walls in front of other walls, and installing lighting fixtures and ventilators to artificially simulate sunlight and the outside air. When describing the work, Schneider has stated, “I dream about taking the whole house away with me and building it somewhere else. My father and mother would then live in it, older relatives would lie dead in the cellar, my brothers would live upstairs. ... I am somewhere in there, too, constantly rebuilding everything.”2 Louise Bourgeois’s Maison (1986) takes the schematic form of a house with seven levels upon which organic forms made of plaster rest. Here, as with her other deeply symbolic work, the artist explores autobiographical themes such as her childhood and later agoraphobia. As historian Beatriz Colomina suggests, “the scene [Bourgeois] constructs ... is that of homesickness, in the double sense of mourning for a lost home and the sickness of the home itself.”3 Jeff Wall’s Rear, 304 E. 25th Ave., May 20, 1997, 1.14 & 1.17 (1997) depicts a drug addict standing outside the back door of a dilapidated house, and a small photo insert on the right side of the image shows a close-up of a hole in the back door through which money is being exchanged for dope. In this work, the door denies access to refuge and instead permits transgression; the home itself is a vessel for the depraved.

Time and space can take on an uncanny quality within the home, and an ordinary room may elicit strong physical and psychological experiences for those who enter. Francis Alÿs’s Déjà vu (1994), for example, consists of two near-identical paintings of a bedroom hung in separate rooms. Upon encountering the second of the pair, an unsettling sense of temporal disorientation lingers for the viewer. A selection of Polaroids depicting domestic scenes by Philip-Lorca diCorcia transgress the casualness and immediacy of the medium by capturing a pervasive mood of loneliness, melancholy, and isolation. Similarly, while the photographs from Thomas Ruff’s series Interieurs (1979-1983) appear to be objective visual records of the artist’s apartment and family home, Ruff’s technique strips these intensely personal places of their familiarity. Maureen Gallace’s seemingly idyllic paintings of houses in rural New England signify, according to critic Bruce Hainley, “the psychic comfort and turmoil of ‘house’ and ‘home.’” The artist frequently leaves the houses she depicts devoid of windows and doors; “for Gallace, interiors remain unseen, unseeable.” 4

Other works in the exhibition pose questions of memory, presence, and absence. Luc Tuymans’s sparsely colored, figurative works speak in a quiet, restrained, and at times haunting voice, and typically refer to horrific and violent events that are shrouded in ordinary, everyday imagery. The obscured remains of a brutal act are alluded to in Attic (1995), and a quotidian dinner table is infused with political undertones in Plates (2011). In Mamma Andersson’s Sovrum/Bedroom (2007), a claustrophobic, empty interior seems innocent at first glance. An overturned chair, however, alludes to a possible disturbance of some kind. The home simultaneously becomes a place of refuge, security, isolation, and violence. Toba Khedoori’s large-scale work on paper Untitled (White Fireplace) (2005) divorces its subject—a symbol of warmth and domestic tranquility—from the markers of place and time. Here, the artist’s motif becomes a disquieting representation of dislocation and failure. Larger notions of domicile security are undermined in the sculptural work of Isa Genzken, where a concrete fragment recalls bombed out buildings and traumatic moments in German history.

Many of the artists in the exhibition imbue everyday objects with a psychological weight that seems to belie their formal simplicity. Mona Hatoum’s Home (1999), for example, is comprised of a large kitchen table upon which various metal cooking utensils are attached to a network of wires, literally charging the conductive objects with a electrical current. According to the artist, “I called it Home because I see it as a work that shatters notions of the wholesomeness of the home environment, the household, and the domain where the feminine resides. Having always had an ambiguous relationship with notions of home, family, and the nurturing that is expected out of this situation, I often like to introduce a physical or psychological disturbance to contradict those expectations.”5 Rachel Whiteread creates charged, almost ephemeral negative versions of cast objects that bear the marks of their previous use while becoming sculptural objects in their own right. Using furniture as a metaphor for human beings, her work suggests a physical and psychological presence that simultaneously insists upon the notion of absence. In Untitled (Black Bed) (1991), a bed is entombed in its own materiality. Michael Brown’s housepainter’s brush, eerily left behind, points to the erasure of the history of a house and its inhabitants one coat of paint at a time.

Similarly, Robert Gober’s Untitled (1984-88) infuses a mundane household object (in this case, a kitchen sink) with an unsettling sense of unfamiliarity by stripping it of its ordinary functions. This work exemplifies the artist’s interest in “taking the forms of a more minimal vocabulary and infusing them with an emotional, biographical, and hallucinatory quality.”6 Carved out of human bone and encased in a glass bell jar, the “freighted materials” that make up Charles LeDray’s Bone Rocker (1995), writes curator Russell Ferguson, “inevitably introduce the theme of mortality [as it] inescapably suggests the sleep of death that lies just beyond the comfort of the rocking chair.”7 David Altmejd’s Untitled (2011) features a rough form of an anthropomorphic structure made out of plaster, wood, and burlap that appears to have been violently formed by the artist’s hands, obliterating distinctions between interior and exterior. The organic structure of the work indicates a tension-laden relationship between its materials and the body of the artist.

The exhibition ends with Adel Abdessemed’s Exit (2007). Following the artist’s emigration from his native Algeria to France, the work presents a small yellow neon sign that reads “Exil” which, translated from the French, means “exile.” The work points to the political necessity of exile, the trauma of displacement, and the tenuous notion of “home.”