The Museum on the Museum. On the occasion of the 20th anniversary of its first permanent exhibition, Ludwig Museum Budapest reflects on the topic of the museum, that is on itself, through the critical works of Hungarian and international neo-avant-garde artists, as well as through the ironic, witty works of contemporary artists. The works displayed in this exhibition demonstrate that the roles played by the different actors of the artworld, and the ways of interpretation cannot be considered fixed any more. 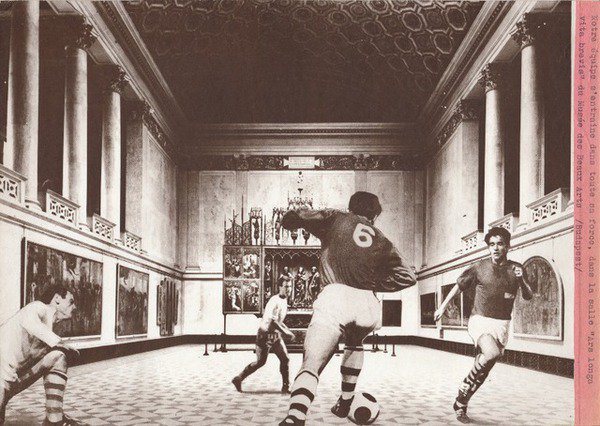 The spectacular new museum buildings, the growing number of visitors all over the world, clearly show the fundamental changes that museums went through during the last couple of decades. The new museums are not only places for keeping and preserving priceless works of art, museums also educate and entertain masses of people. On the occasion of the 20th anniversary of its first permanent exhibition, Ludwig Museum Budapest reflects on the topic of the museum, that is on itself, through the critical works of Hungarian and international neo-avant-garde artists, as well as through the ironic, witty works of contemporary artists, many of which can be seen for the first time in Hungary.

While the museums’ main function is to preserve works of art for eternity, museums have gone through fundamental changes recently. New, spectacular museum buildings all over the world, the increasing number of visitors indicate that the function of the museum has changed radically. The encyclopedic museum, the modern art museum are followed by a new type of museum. This new museum offers a different kind of knowledge, as well as entertainment. The museum has proved to be one of the most successful cultural institutes, collecting, preserving and displaying pieces of art, it is also a powerful institution, as it can select those works of art that may be the objects of a future art history. Since the beginning of the 20th century, artists have been criticizing this canonizing function of the institute of the museum, while at the same time they (or many of them) are longing to get into the museum themselves. On the 20th anniversary of the first permanent exhibition of the Ludwig Museum, the museum is looking to itself in the mirror held by the artists. The museum conducts a site inspection.

The exhibition puts a special accent on the local and international neo-avant-garde artists of the 1970’s dealing with the topic of the museum, since their institutional critique can be considered the predecessor of contemporary reflections on the museum. By examining the nature of the work of art itself, Marcel Duchamp was the first to point out the paradoxes of the connection between the work of art and its context, the museum, between the artist and the spectator. Duchamp has created his suitcase museum, that is, museologized himself. For the conceptual artists of the 1960’s and 1970’s it was again important to reflect on art itself, they often created their own “museums,” as if they had corrected the mistakes and failures of the official institute and had introduced their own new canon. By their institutional critique they demonstrated that the works preserved by the museums as pieces of great value could gain a totally different meaning in a different context. Depending on the context, even an index card registering the work of art can be transformed to art, and the spectators, as well as parts of the museum building itself can change roles, step in the foreground and play a major part. The artists themselves are showing up in different roles in the museums. These artists also pointed to the fact that the museum is inextricable of its social context. Thus, the artists who criticize the museum as an institution, criticize society itself, they unmask the hidden value system that the museum represents, and how art and the market are interconnected. They investigate the collection, the policy of getting news acquisitions, as well as hidden ideologies, the museum is presented as the model of society. While contemporary art does not really separate high and low, popular culture still preserves a rather stereotypical, elevated image of the museum, and the museum cannot withdraw from the effects of popular culture. This complex situation is well represented by the movie films and video clips projected in the movie space of the exhibition.

The artists who practiced institutional critique in their art in the 1960s and 1970s consciously created works of art that are not marketable or easily museologized. It is a paradoxical situation that, most of these works are in museums by now. Today this attitude has changed, and contemporary artists do not offer an outside point of view from where they can criticize the museum. The artists are also part of the art world system and they intimately know how it works. Artists do not consider themselves victims, neither does the museum feel guilty. The works displayed in Site Inspection demonstrate that the roles played by the different actors of the artworld, and the ways of interpretation cannot be considered fixed any more. What the museum can do is to see and show how it works, and dare to face its own criticism.

The main sponsor of the museum is MASTERCARD.
The exhibition was sponsored by: art’otel, Lightware Visual Engineering.

Library+
Hans Haacke's book, Der Pralinenmeister / The Chocolate Master (Toronto: Art Metropole, 1982), and a digital database including a selection of documents on the history of the Ludwig Museum, as well as other publications connected to the topic of the exhibition can be consulted in the museum library on second floor.
Open: September 1–October 22, Wednesday–Friday 11 a.m.–18 p.m., Saturday 2 p.m.-6 p.m.

Attila Menesi: Múzeum remix: Ludwig, 2011
Projection based on the lettering on the facade of Ludwig Museum – Museum of Contemporary Art
July 21, from 9 p.m.

Téreltérítés Munkacsoport / Space Detournement Working Group: Fitotherapical Aromaguide at Ludwig Museum, 2011
During the opening hours, scheduled at different times in August and September, Space Detournement Working Group is conducting research in order to get accurate information about the neurotoxic effects of the exhibition space. The research aims to set up an accurate local diagnosis of the recently identified SMS (Sick Museum Syndrom) caused by strictly controlled museum rooms and environment of works of art, as well as to work out an effective, and in situ applicable fitotherapic substance. The self-feeding appliance, attachable to the head, is under development, it will be tested on site between 20th and 24th of September. Volunteers may take part in the testing process free of charge and without any danger.
September 20–24, from 10 a.m. to 6 p.m.

Chapters from the Life of the Museum. The Museum as an Institution a series of lectures about The Birth of the Museum, Exhibition narratives on the art of the 19th Century, Does (Neo)avant-garde need any museums?, The museum – the machinery of classification, The Missing Museum with lecturers Ernő Marosi, Éva Bicskei, Edit Sasvári, Péter György, József Mélyi.
Wednesdays, at 6 p.m., from September 21 to October 19

Ludwig Open Day program of the Museums' Autumn Festival with creative working programs, The Big Draw, talks and discussions, lectures, and guided tour behind the scenes and in the exhibitions
October 22, from 10 a.m. to 7 p.m.

Image: Lakner László: Football in the Museum of Fine Arts, 1971. Courtesy of the artist.

Ludwig Museum – Museum of Contemporary Art
Palais of Arts, 1095 Budapest, Komor Marcell u. 1.
Open from Tuesday to Sunday from 10 a.m. to 6 p.m.
General admission: HUF 1 200
Group discount ticket for groups of more than 10 people: HUF 1 100 per person
Valid for the Collection display as well