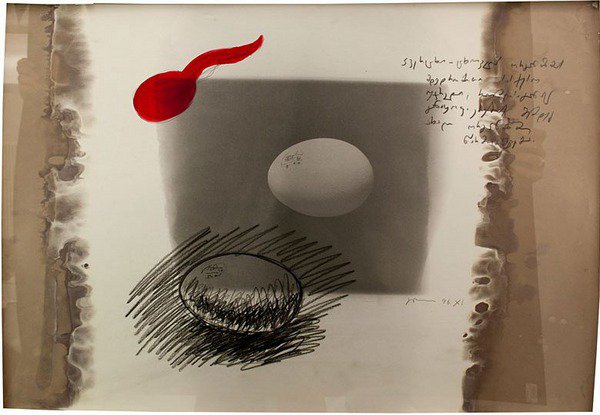 Galerie Barbara Thumm is very pleased to present in this year's Summer Show Anne-Mie van Kerckhoven and Johnny Miller together with Marius Bercea, Anna K.E. and Guram Tsibakhashvili who are shown for the first time in Berlin.

Marius Bercea draws inspiration for his lively and engaging figurative paintings from what he describes as "an intensely personal archive": family photographs, newspaper clippings, tales from his family's history and his own memories of growing up in Romania under the Communist regime. Yet despite the gravity of the subject, the artist focuses on the happiness of simple moments, such as games, school trips and the daily rituals of childhood routine. In this series of paintings, the pathos doesn't come from the pictorial motifs, but from the chromatic scale, like a sickly yellow bringing to mind the infected sky of the Ukraine's Chernobyl. Bercea is paradoxically nostalgic and critical, emblematizing the position of many in eastern Europe.
Far from banishing us to the role of outsider or voyeur, Bercea's uniquely personal and nostalgic approach elicits empathy and a sense of longing for our own pasts. The prompt for us to begin searching our own memories might be a sensitively described scene, an exchange between figures or a spontaneous gesture (it differs from painting to painting.) The consistent thread is that each depicted subject possesses a particular significance for Bercea – a trace to an actual experience - and it is the grounding of each work in an historical event that creates a connection between the present and the past.

Working across historical boundaries and artistic disciplines, Anne-Mie van Kerckhoven explores different ways of describing the world, which she locates between the antitheses of eros and ratio. In terms of content, this is linked on the one hand to concepts of the sexualized female body, and on the other to a technoid algorithmic logic; formally, this tension manifests itself in both computer-generated and hand-drawn images. In van Kerckhoven's work, the interior has for many years been a place she has loaded with references, above all to philosophical constructs whose representatives get together and hold discursive seances in her exhibitions. For an artist who views the world from a feminist perspective, the interior almost inevitably presents itself as a space for reflection – it is, after all, the traditionally accepted 'woman's place' and it also symbolizes the restricted nature of women's sphere of action.

Johnny Miller is a master of melancholy and the grotesque. The personnel of his linocuts, collages and drawings consists of bizarre and tragic figures. They exhibit clownesque or animal-like features, are as small as midgets or big as giants. As agents of the subconscious, they represent diffidence in interpersonal encounters (Defending My Position, 2009) as well as physical and emotional inadequacies (The Piano Lesson, 2009).
Miller's very diverse pen-and-ink drawings, some of them featuring colour, frequently invite reading as reminiscences of the classical Japanese woodcut. In addition to the fluid lines and the absence of a central focus in his pictures, he also favours the artistic depiction of his beings' inner natures over their realistic representation. At the same time, in Miller's style and subjects we find echoes of British illustrations and caricatures of the Victorian age. The mishaps and transformations taking place in the dream-like world of Alice in Wonderland (1865) were visualized so pithily by their inventor Lewis Carroll and illustrator John Tenniel that the story's title has even come to denote a clinical condition. The "Alice in Wonderland syndrome" designates an illness where the patient perceives himself or his surroundings in changed manner, often miniaturized or enlarged.
Johnny Miller's powerful and richly associative images accord us a glimpse of the land "through the looking glass". Through the medium of drawing, practised by the artist with consummate craftsmanship, his bizarre scenes, his peculiar and tragic protagonists, and the sombre mood which envelops his worlds attain the greatest authenticity and intensity.

The young Georgian artist Anna K.E. works with drawings as well as sculptures, which are located on the border between visual arts and design. The hybrid works of Anna K.E. can not be classified into traditional categories, because her works combine several disciplines and styles. In the drawings “names and games” representational meet abstract elements that often stand at the threshold of the figurative. Because of the balanced and harmonious composition, the combination of trendy, bold colors with delicate lines and a variety of surface treatment, opposites merge to a meaningful whole. The graphical works of Anna K.E. reveal an interest in architecture and structural analysis. Quite often pictures of realized sculptures - reminiscent of architectural sketches - appear without assuming the function of a sketch.
In times of more conceptually working art scene Anna K.E. works with a classical sculpture concept. Especially the tension between handmade and machine built materials shows this. Until 17th of July Anna K.E. can still be seen in the exhibition "Without Jewel" at the Kunstverein Leverkusen.

Guram Tsibakhashvili studied chemistry at the Tbilisi State University and was a part of the eighth floor group of artists in the late eighties and early nineties. He established photography to a high art form in Georgia. He had his first solo exhibition in New York in 1996 at the Joyce Goldstein Gallery. In 2009 Tsibakhashvili was a part of the Groupshow "born in Georgia", which was shown at the Cobra museum in Amsterdam.
The series 'Definitions' (1996-97) is exhibited in extracts at the gallery. The titles of the works are humorous definitions of terms or objects that losely describe the depicted subject. Tsibakhashvili basically documents his peers. Accordingly this series is based on found negatives by Kezel, an unknown documentary photographer. Tsibakhashvili found his negatives that someone was disposing of. (He gives credit to Kezel by the way.) Tsibakhashvili works with X-ray paper - which was used in medical facilities in the USSR. The water-color effect of the photographs results from this.