'Lazarus Protocol' is the first solo exhibition in Scotland by Victor Man. Paintings and sculptural installations have been created by Man as part of the Giuseppe Sacchi Project, and the exhibition is accompanied by the launch of the book If Mind Were All There Was. 'Parlour Apes', an exhibition of new work by Christian Newby, presents his 16mm film, large-scale marbled-ink drawings and screen-printed light-fixtures. 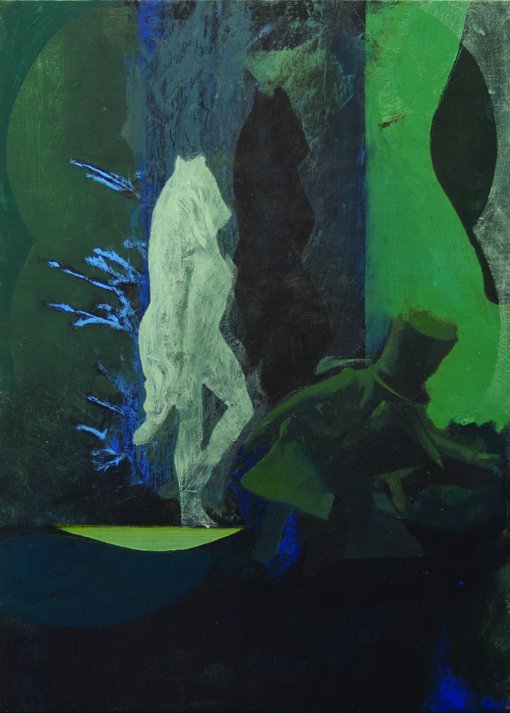 The found images and objects within Man’s paintings and sculptural installations do not suggest a precise history or provenience, but instead invoke a sense of an illusive, yet recent past. Man creates new contexts and arrangements of disparate components that disrupt any linear narrative. The reoccurrence of shadowy, reflective and transitory glimpses in the works of Lazarus Protocol serves to create mysticism through omission, “pointing out how ‘loss’ may give rise to an awareness of the connectedness of all things”.

The works have been created by Man as part of the Giuseppe Sacchi Project, and the exhibition is accompanied by the launch of the book If Mind Were All There Was, co-published with Kaleidoscope, Italy. The conceptual content of the publication stems from Man’s 2009 Exhibition, If Mind Were All There Was, at the Hayward Gallery. The show’s lynchpin was a reference to a piece of graffiti originally found on the fresco The Legend of the True Cross by Piero della Francesca in San Francessco Church, Arezzo Italy, that simply reads ‘Giuseppe Sacchi’.

Research by Man into this name lead to a Giuseppe Sacchi, a seventeen century painter about whom almost nothing is known, but upon whom Man has invited the publications contributors to devise histories, to reconsider the parameters, limits and possibilities of art writing; “How can we conceive art history when no evidence about the artist and if his or her art exists?”

Shot in Newby's blacked-out studio, the 16mm film Jan & Dean navigates across an ensemble of static objects creating a sequence of compositions and formal relationships. The objects appear as autonomous sculptures, simultaneously generating and suspending action to develop a flexibility and uncertainty of scale. This effect is conflated with references to modernist theatre set design. Newby dismantles the idea of a cinematic space intensified for narrative ends: Caught in semantic ambiguities, the status of the objects is uncertain. In some scenes objects appear personified and have their own character, while other vignette scenes elevate the viewer’s awareness to scale and remove implication to a specific narrative. Recalling the fame and familiarity of the popular music duo from the ‘60s, the film's title Jan & Dean suggests a connection with actors or a story. The title works as a referent, colouring the sequence of images with surf sounds of the ‘60s, but at the same time burrows itself as an absentee player, maintaining an emptiness regarding the presence of any actual drama taking place.

In treating the gallery space as site for potential fictions, Newby’s work oscillates between the experiential and material world. His large marbled-ink drawing of intensely patterned configurations creates a compact maze only to evaporate back to its original point of reference as an end-page, where the ‘real’ enters an equivocal realm. Shadowy light cast by screen-printed light fixtures creates a space of spectral fictions, leaving us with a sense of how ambiguity might manifest itself. In this ambiguity is the possibility that meaning always escapes into another meaning, and through this, Newby’s work remains in a continuous state of immediacy. This strategy of a densely patterned accumulation of objects and images draws on a central theme in Newby’s work, where a vast range of historical references reconstruct the past, and are replaced, with an anachronistic and formal experience of how we see the present.

Christian Newby was born in 1979 in Virginia Beach, VA. He received his B.A. in Sculpture and Extended Media at Virginia Commonwealth University in 2002 and then an M.F.A. at the Glasgow School of Art in 2009. Recent exhibitions include: Stillmatic, SWG3, Glasgow; Man in the Dark, The Woodmill, London; Hierarchies of Allegiance, The Royal Standard, Liverpool; I No Longer Have Anything to Fear, Victor & Hester; Showreel, Collective Gallery, Edinburgh; Self-Made Cavalcade, Akademie Galerie, Munich; Set It Up and Go, Artnews Projects, Berlin; Grey Goo, V8 Platform, Karlsruhe, Germany. Newby recently attended a month long residency at DCR, The Hague, and the Triangle Arts Trust’s 4 month residency programme at Triangle France, Marseille. He lives and works in Glasgow.