The point of departure for the exhibition 'Details' is Rastko Mocnik's collection of texts entitled 'How Much Fascism?', published in 1995. Among the artists Lene Berg, Burak Delier, Superflex and Milica Tomic. Chaos as Usual explores various structures that influence our lives in our relations with a contemporary culture in which global branding mingles with popular expression, cartoons with haute couture and serious media with spambot-generated content. 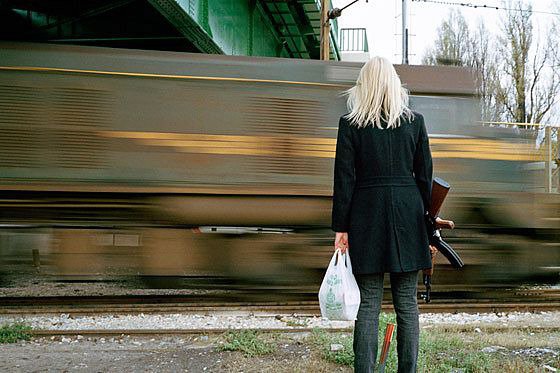 Curated by What, How and for Whom / WHW

For the first exhibition of the autumn Bergen Kunsthall has invited the Croatian curator group What, How and for Whom (WHW) to put together a new exhibition especially for Bergen Kunsthall. The six artists in the exhibition, from the USA, Serbia, Turkey, Israel, Denmark and Norway, all touch upon the main theme of the exhibition, which revolves around various occurrences of Fascism in our time.

WHW on the exhibition:

The point of departure for the exhibition “Details” is Rastko Močnik’s collection of texts entitled How Much Fascism?, published in 1995. In the midst of the disintegration of Yugoslavia, Močnik related the conflicts and the rise of Fascist forces in geographies “from the Adriatic to Siberia” to the structural consequences of the introduction and reconstruction of peripheral capitalism. At the time of the establishment of several new state entities based on nationalistic ideologies, Močnik outlined the range of social conjunctures crucial to this process, commenting on their “anti-anti-Fascism” and cultural policies with racist undertones. He detected Fascistic social effects within but also outside peripheries, relating them to general processes in the restructuring of the public sphere in late capitalism, and pointed out that “new local populism, new ‘fascism’, new right-wing extremism, are the ways in which we participate in European or even world history”. His writing thus clearly opposed the discourse which at the time was upholding a false dichotomy between Western tolerance and multiculturalism, and the excessive, extremist ethno-nationalism of the regressive periphery.

A fundamental ideological shift has occurred in the meantime – there has not even been a declaratory proclamation of multiculturalism, and calls for ‘protection of the integrity of tradition and cultural values’ have become almost obligatory rallying cries for Western politicians. Today, with an alarming right-wing ascendancy throughout Europe, we should direct our gaze beyond the ‘peripheries’ and towards the cores of liberal democracies.

In fact, since the time when Močnik’s texts were written, many things have taken a turn for the worse – one can mention Berlusconism, this “functional and post-modern equivalent of Fascism” that has become just one more thing to get used to; or the fact that for the first time since WWII people are being expelled from Western European democracies solely on the basis of their ethnicity, as with the recent deportations of Bulgarian and Romanian Roma from France.

The basic postulate of Močnik still remains – the question is not “Fascism – yes or no?” but “how much Fascism?”. In a recent article, Hito Steyerl poignantly points to the need to address precisely this ‘question of the level’ in the contemporary rise of Fascism: “How many hairs does one have to lose to be considered bald? Or, in political terms: How much civility can the public sphere lose without lapsing into Fascism? How much fear among minorities and how much radical, neoliberal pauperization is permissible if societies are still to qualify as democracies?”

Obviously, open manifestations of Fascism are fairly easy to recognize (just as more and more of them are appearing), but we need to turn our attention to the silent Fascism that is beco¬ming normalized through the systematic violence seeping into the laws and everyday administrative practices of the nation-states, and to assess the mechanisms of oppression and various symptoms of contemporary Fascism that are being presented as unavoidable, pragmatic necessities. In other words, we have to look at the details.

The curator collective What, How and for Whom/WHW is based in Zagreb and has existed since 1999. WHW has contributed to a wide range of productions, exhibitions and publications. As curators they were for example behind the 11th Istanbul Biennial (What Keeps Mankind Alive, 2009) and the Croatian Pavilion at the Venice Biennale (One Needs to Live Self-Confidently… Watching, 2011). Since 2003 they have also curated the artistic programme at Gallery Nova in Zagreb. WHW consists of Ivet Ćurlin, Ana Dević, Nataša Ilić and Sabina Sabolović.

In 2011 our experience of the world is to a great extent based on the endless circulation and recirculation of imagery. The Internet has decontextualized everything. All is available, wherever, whenever.

Chaos as Usual explores various structures that influence our lives in our relations with a contemporary culture in which global branding mingles with popular expression, cartoons with haute couture and serious media with spambot-generated content. The virtual world has become the real world, and even the preferred world for the younger generation.

In this exhibition the artists use a variety of strategies and techniques in the encounter with a complex visual culture. Takeshi Murata makes eerie computer-generated still lifes of both everyday and obscure objects, where any hierarchy of importance among objects is levelled down. Seth Price similarly juxtaposes important and insignificant pictorial material in a video composed of unused leftovers from the artist’s earlier works. Liz Deschenes’ The Green Screen refers to a frequently-used tool in film and video – from the film productions of the 1920s to today’s home-made ‘skits’ and pop-culture remixes distributed on YouTube. In Ann Craven’s paintings, images we normally associate with nature (flowers, birds, owls, etc.), are equally part of a mediated and reproducible reality and collective memory. The apparently banal subjects of the type one finds as an endless flow of ‘cute’ illustrations on the Internet turn out to be honestly painted exercises in conceptual repetition.

These are just a few example of how this exhibition navigates in an image culture where the web-based production, communication, sharing and recirculation of images have changed our relations with and our understanding of the meaning and function of the image – and where various forms of (self-)representation become part of a new social identity. Thanks to the media-neutral eradication of former distinctions between original and copy, paintings, digital images and animated GIFs are today parallel tools for thematizing the age’s endless repetition and recontextualization of images.

Hanne Mugaas lives and works in New York, where she is among other things a Curatorial Associate at the Guggenheim Museum, and runs the gallery Art Since the Summer of 69. She has curated exhibitions and projects at places including MoMA, New York; New Museum of Contemporary Art, New York; Art in General, New York; Moving Image Archive of Contemporary Art (MIACA), Tokyo; Vilma Gold, London; and Ooga Booga, Los Angeles. She holds an MFA in Curating from Goldsmiths College in London.

Image: Milica Tomić:One day, instead of one night, a burst of machine-gun fire will flash, if light cannot come otherwise (Oskar Davičo – fragment of a poem) action/intervention in the public space, Belgrade, 2009. Dedicated to the members of the Anarcho-Syndicalist Initiative – Belgrade, 3. September, 2009. Courtesy of the artist. Photo: Srđan Veljović

Platform: What, How and for Whom: Friday 9 September 6.30 pm.
Lecture on the occasion of the opening of the new exhibition Details by the curator team WHW. Platform is Bergen Kunsthall's own lecture series. It includes presentations, lectures and debates involving some of the leading artists, curators and theoreticians on the contemporary art scene. Free entrance!