Tue-Sat, 11am-6pm and by appointment

Contemporary Drawings from Germany. The exhibition highlights artists whose artistic perception emerges from within, working almost as if the eyelids were closed, accessing an enormous potential bank of imagery. All the artists in the show lay bare initial impulses and visions through this medium. 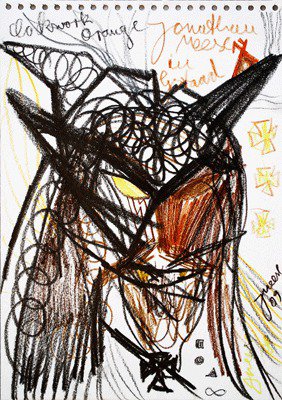 Nowhere is the artist as naked as when it comes to drawing by hand. This exhibition highlights artists whose artistic perception emerges from within, working almost as if the eyelids were closed, accessing an enormous potential bank of imagery. All the artists in the show lay bare initial impulses and visions through the intimate medium of drawing. The result is work that expresses the subconscious, even the uncanny. What seems to be strange at first sight turns out to be uncomfortably familiar. "The direct expression of artistic spirit through the drawing utensils and the speed with which subjective impulses can be translated onto paper enables artists to use drawings to cut through the superficial layers that muddle things and actions," states Sonna. "No post-edits or alterations are allowed: a cosmos of imagination arises from just a few lines, where word and image can mingle easily, and subversive energies are set free."

Jonathan Meese is considered one of the most revolutionary German artists. He claims a leadership of art in society. Meese is the maker of his own cosmos, which can be inhabited by sinister figures such as Caligula, Stalin, the Marquis de Sade, Richard Wagner, Balthus and Dr. No, among others. His drawings make obvious the goal of escaping violence through art.

In his artistic language, Andy Hope 1930 creates a fantastic world filled with comic superheroes and arch villains alongside political figures that he mingles with icons of film and literary history. These entities coexist in a realm of their own that is hard to place or read with the literal mind.

Ralf Ziervogel works almost exclusively in ink pen. He obsessively elaborates every detail and depicts absurd, partly perverse, and even terrifying imagery of people and their actions. His black and white drawings resemble a contemporary interpretation of Hieronymus Bosch's dark panels, tempting the viewer to immerse himself into a remote world of subconscious fears.

Hansjoerg Dobliar appropriates obscure as well as commercial images taken from vintage magazines that he manipulates to create imagery that oscillates between familiar pictures and disorienting drawing.

Marc Brandenburg's black and white graphite drawings invert usual images to their negatives. The artist gives the depicted objects a frightening effect. A young bride seems to be filtered through x-ray, turning her white gown to an all black cloak.

Ulla von Brandenburg is most known for her video work often seen surrounded by handmade curtains. Her surreal plots inserted into everyday scenery put the viewer in limbo, unsure of how to interpret what he or she is seeing. In this exhibition, she will be showing paper cutouts that demonstrate an interest in traditional crafts while producing images that easily slip between abstraction and figuration.

Bo Christian Larsson's work seems to emerge from an urbanized and yet archaic mythology. Dark imagery permeates his installations and sculptural work. Drawing is a crucial part of his artistic vocabulary. Serene colors can appear next to his dark palette. A strong bond to nature is part of his artistic spirit. This will be Larsson's New York gallery debut.

Florian Meisenberg's works seem so lighthearted that it takes a second glimpse to detect their gravity. Meisenberg uses colorful arrangements to offset and disguise his deep introspection. In this exhibition, he will show a large text-based work that reflects his constant search for dichotomies in every trace of life. A wholistic yearning drives his artistic examinations.

Established in 2011 by Johannes Vogt and Fabian Bernal, VOGT GALLERY is committed to bringing attention to the complex artistic and cultural ties that bind New York to both Europe and Latin America. The gallery program seeks to challenge mid-career as well as up-and-coming artists of diverse backgrounds to create new visual and conceptual vocabularies to reinvigorate these bonds. Vogt Gallery has had the privilege of premiering the work of Nicole Wittenberg and Patricia Dauder in New York, and will present debut solo exhibitions of Bo Christian Larsson, Cristóbal Lehyt and Mernet Larsen in 2012. The gallery puts an emphasis on curated shows to further artistic discussion and serves as a venue for performance art. In July 2011, Vogt Gallery hosted a month-long performance series curated by Gene HcHugh, including works by Jeremy Baily, Nick Silva and Marisa Olson. This November, Vogt Gallery will host a five-night performance series curated by Anne Apparu, with a final performance by Agathe Snow. This initiative will coincide with performa 2011.