An exhibition of new and ongoing work by Andrea Zittel. Her unique and unusual practice embraces the social and personal spheres engaging sculpture, textile, design, and painting. Her exhibition will consist of four bodies of work: "Lay of My Land"; "Wallsprawl"; "A-Z Uniforms"; and "Prototypes For Billboards A-Z West". 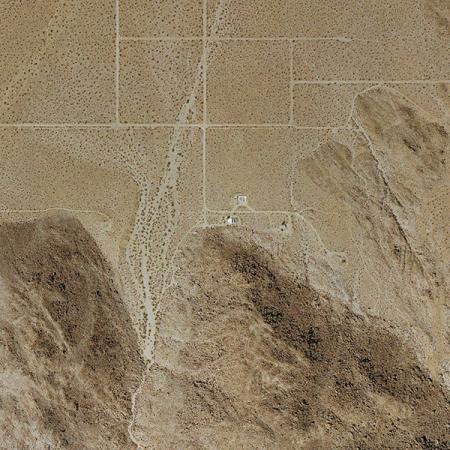 Regen Projects is pleased to announce an exhibition of new and ongoing work by Andrea Zittel. A Southern California native, currently living and working in Joshua Tree, Zittel's show will be presented at the same time as the Getty Museum's multi-institution initiative "Pacific Standard Time: Art in L.A. 1945-1980," about the Los Angeles art scene. Although Zittel is from a younger generation, her exploration of place and re-mapping of physical environments make her an obvious heir to the Pacific Standard Time project, while her unique and unusual practice embraces the social and personal spheres engaging sculpture, textile, design, and painting. Her exhibition will consist of four bodies of work: "Lay of My Land"; "Wallsprawl"; "A-Z Uniforms"; and "Prototypes For Billboards A-Z West".

"For the last fifteen years I've been exploring landscape through the intersections of territory, commoditization, and identification.

One of my first sculptural landscape works, "Point of Interest" in Central Park, reinterprets an eighteenth century landscape of leisure as a twenty-first century landscape of action and adventure. Later, three different series of "Islands" address the fear/fantasy psychology of individualism, isolation and self-sufficiency. After moving back to my home state of California and establishing A-Z West in the high desert region of Joshua Tree, my interest in the politics of space and land have culminated in two bodies of work that will be shown at Regen Projects.

The first two works, from a series titled "Wallsprawl," frame the rapidly changing cultural context of the West. Each "Wallsprawl" consists of a repeating pattern of real photographs depicting fringe areas where wide-open desert meets large-scale urban development. This is the West that I grew up in-a place where my parents built a house in an isolated rural area that sixteen years later became a fully developed suburban matrix complete with shopping mall. Witnessing this rapid takeover of the natural made me view human progress as a sort of parasitic or viral expansion. Similar to actual growth, the "Wallsprawls" have the capacity to repeat infinitely, folding a single image over into an infinite sprawl.

While the sprawls depict a landscape being compartmentalized into units of commoditized land, "Lay of My Land" represents segregated parcels that are slowly being gathered into a larger whole. "Lay of My Land"is a sculpture of the 35 acres that currently compose A-Z West, an ongoing site-specific project that I've been creating in the Mojave desert for the last eleven years.

The history of the western expansion is in large part a history of land and real estate. First divided up by the Jeffersonian grid (a one mile square system meant to facilitate land distribution from Washington DC), the land in the High Desert was then further divided by the "baby" Homestead Acts that promised five-acre parcels free to those who would erect a small structure on it. "Lay of My Land" speaks to this history of division and subdivision by representing the seemingly endless desert as gridded chunks of segregated and conceptually isolated commodities.

In Regen Projects I, there are two works that have evolved as a result of using the arena of my day-to-day life as a testing grounds for prototypes for living. Perhaps one of the best-known personal experiments, ongoing since 1991, is the "A-Z Uniforms," a series of personal "uniforms" that I have been making and wearing for an entire season. The Uniforms on view at Regen Projects begin in 1994, and include "A-Z Fiber Form Uniforms," "A-Z Personal Smocks" and "A-Z Single Strand Uniforms." These garments, while both beautiful and functional, also question our associations of freedom or personal liberation with the market demand for constant variety. The Uniform project proposes that liberation may in fact, also be possible through the creation of a set of personal restrictions or limitations.

The techniques used to make each series of uniforms are the result of a deeply conceptualized approach to making-from crocheting which is "forward motion process" that involves no waste or "backward motions"-to felt-making in which raw material is fashioned into garments for the body using the makers hands as the only tools (garments made by the body for the body).

The last works are a new series of "Prototypes for Billboards At A-Z West." The billboards, often filled with autobiographical imagery or "principles" of knowledge gathered while attempting various experimental living situations, have been an ongoing series that propose propaganda and the art of "illustration" as a kind of higher truth because of it's transparency as a conveyor of meaning. This particular grouping titled "bodies in space with objects" is a rather playful and sometimes slightly surreal exploration of the fundamental basis underlining my larger art-making practice." Andrea Zittel, 2011)