'barely there' is a two part group exhibition that explores issues of immateriality, presence, absence, performance and the performative. The exhibition also considers the ability of art to engage broad and often intangible concepts by generating a series of connections rather than functioning as a prescribed whole. 'Considering a Plot (Dig for Victory)' is a work in progress, developed by Stephanie Nava. The installation is based on the specifications and history of English allotments, or subsistence gardens. 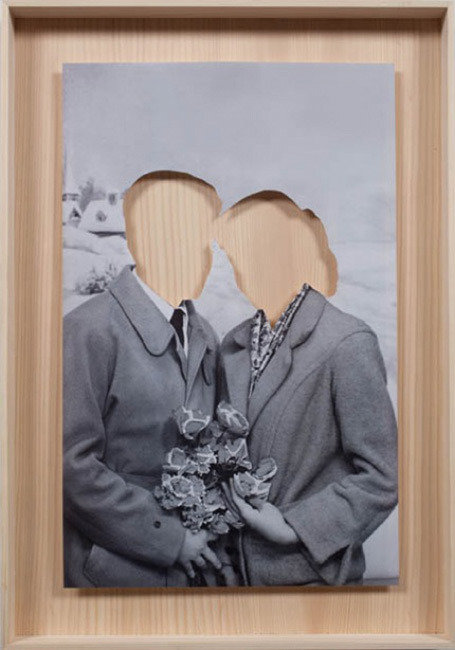 barely there is a two part group exhibition that explores issues of immateriality, presence, absence, performance and the performative. The exhibition also considers the ability of art to engage broad and often intangible concepts by generating a series of connections rather than functioning as a prescribed whole. barely there includes a multigenerational group of artists and artworks produced in the span of over eighty years from the late 1920s to the present.

The first installment of the exhibition presented this summer dealt with the mind, touching on abstract concepts such as death, love, identity, imagination, knowledge and the unintelligible—many of them a constant fascination to artists over the centuries. The second part, on view in the fall of 2011, features work that focuses on the body as a generator of knowledge, memory and as an instigator of social, political and spiritual change and as capable of leaving invisible traces to mark space.

The artworks in barely there are ephemeral, immaterial and/or transparent—as the title suggests—and exist in a permanent state of contingency without trying to generate true or false answers, focusing instead on the immense and open-ended possibility of art to pose large questions but also to be meaningful rather than decipherable.

barely there, an exhibition in two parts, is organized by the Museum of Contemporary Art Detroit (MOCAD) and curated by Luis Croquer, Director and Chief Curator. Support for barely there (part two) is provided in part by the John S. and James L. Knight Foundation.

Considering a Plot (Dig for Victory) is a work in progress, developed by French artist Stéphanie Nava. Its installation at MOCAD marks the artist’s first solo exhibition in the United States. The installation is based on the specifications and history of English allotments, or subsistence gardens. Started in London in 2005 as part of the Institut Français Villa Médicis Hors les murs residency program, the project evolved over time and holds at its core issues revolving around the United Kingdom and United States government programs encouraging citizens to “grow your own” [food] during the Second World War, as a system of offsetting produce shortages.

The installation addresses questions of representation in drawing: namely the relationship between plane and perspective, issues of dexterity and skill, as well as the importance of the line as constructor of space both in two and three dimensions. Nava draws from multiple genealogies of drawing, referencing archival, botanical, architectural and technical forms of the discipline all at once. The mixed media installation considers the role of the allotment, as a site of political, economic and military strategy; community relationships and of course, of gardening and urban farming through a narrative form that draws from areas of expertise such as urban planning and tourism.

In the artist’s own words: “The supposed innocence of gardens doesn’t interest me. As I see it, the garden cannot but be affected by the functioning of a world in which, as in the 17th century in Holland, tulip bulbs can trigger a nationwide financial crisis. I started the project in London and British history is full of convergences between economics, industry and the garden…Throughout the project I fed off the lexical telescoping that characterizes garden-speak. One constant is the politico-bellicose vocabulary: plants migrate, invade and naturalize to such an extent that human systems for handling migration flows are applied to them…The garden is written; it is a designed space and has throughout history been used as a tool for propaganda and control.”

Visitors are invited to stroll through this multi-layered, vast and detailed work, comprised of over a hundred drawings on paper and other objects. Modular and of variable dimensions, the installation evolves each time it is presented and can cover an area of nearly 2,700 square feet. Stephanie Nava’s project examines critically the Victory Garden as a point of departure for urban greening movements in contemporary society, but also reflects incisively on issues of history, community and the practice of art itself.

The exhibition is curated by Luis Croquer and organized by the Museum of Contemporary Art Detroit. Major support for Stéphanie Nava: Considering A Plot (Dig For Victory) is provided by The Graham Foundation For Advanced Studies In The Fine Arts, the Maison Française, The Cultural Services of The French Embassy and the Institut Français. Additional support is provided by the John S. and James L. Knight Foundation.

For press inquiries, please contact Carlie Dennis at 313-832-6622 or cdennis@mocadetroit.org