Why I Never Became a Dancer

Collection Goetz in Haus der Kunst. The exhibition presents 15 videos by international artists who deal with the topic of youth: They examine the social behaviour patterns of adolescents at both a social and private level. Thereby the focus rests not only on the present generation but also on youth culture of the last 30 years. Curated by Ingvild Goetz who will regularly present a selection from her film and media art collection until 2014. 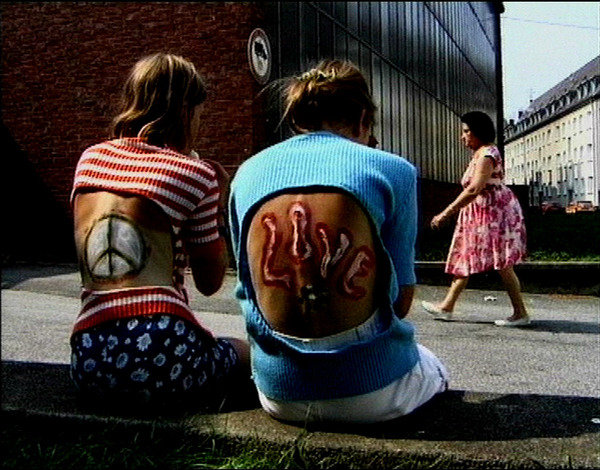 "Each generation has its own cult figure, its own language, its own music and its own fashion and form of expression. Until this cult figure has been discovered, everything is tested: from a certain life style to drugs to the virtual world of the Internet. This is what I would like to express here. " (Ingvild Goetz)

The exhibition "Why I Never Became a Dancer" presents 15 videos by international artists who deal with the topic of youth: They examine the social behaviour patterns of adolescents at both a social and private level. Thereby the focus rests not only on the present generation but also on youth culture of the last 30 years.

Family life and childhood
In her titular work, "Why I Never Became a Dancer", Tracey Emin takes us back to her youth in Margate, England. In a sharp contrast to the places of her youth, Tracey Emin's voice-over tells of her random sexual relationships. Emin stops these escapades when she is 15. She expresses the feeling of self-determination over her own body through dance then. During a dance competition at a disco she dreams of becoming famous and leaving Margate. The cries "slag, slag, slag" from the audience however pull her right back into reality. The photographs which picture her dancing in her studio in 1995 testify her triumph over the audience back then: Tracey Emin has long since left Margate and lives in London as a successful artist.

Personal reports from children about everyday situations, but also of worries, loneliness and injuries are relayed by Gillian Wearing. The staging is initially confusing because the lips of adults move in sync with the children's voices and the adults mimic the children's body language. As in a mirror, the viewer is confronted with the childish behaviour patterns he has relinquished over the years. The spoken words, the traumata and the injuries, all these seem to burst out of the adult. A man, who embodies a boy, talks about his problems with alcohol: "I feel like I'm a man in a boy's body and I like drinking ..."

Doug Aitken depicts the lifeworld of a young girl; images of children's games alternate with those of a ghost car, a plane in the sky and a trip with a truck that is transporting a mobile home. The little girl whispers repeatedly and emphatically: "You can't stop". Conveying the feeling that time is running – racing by – and that childhood or life in general is just a brief moment. All that is left in one's mind are short sequences that chase one another.

Rosemarie Trockel seems to shuffle together an entire life of a family in her 14-minute video installation: Sequences of photographs and animated scenes repeatedly show the same children and grown ups in everyday scenes, in holiday situations, extracurricular activities. All the protagonists have in common, that they wear hand knitted clothing made by Rosemarie Trockel. The viewer is taken on a journey through the knitted-image world of the artist. He attempts to knit a plot – a family's life – yet all the filmed people are friends and acquaintances of the artist, and the video was created in just one month.

Social behaviour patterns
Several works are dedicated to young people and their behaviour with friends. In front of Rineke Dijkstra's camera in "The Buzzclub, Liverpool, UK / Mysteryworld, Zaandam, NL", young people repeat the actions they have just performed in a group in a discotheque in an empty side room. The viewer sees an isolated model situation with authentic individuals who are distinctive. When being part of a bulk in the discotheque that was not discernible. In search of their own identities the young people oscillate in front of the camera between stereotypes and naturalness.

Martin Brand and Tobias Zielony visualize the behaviour of adolescent fringe groups: In “Station” Martin Brand accompanies a group of leftist youths through their daily lives in Bochum. In doing so he does not judge, but rather observes them with restraint. He creates space for intimacy, in which the young people reveal freely their affiliations and even their confusions – the transition period to adulthood. Tobias Zielony's slide projection "Behind the Block" shows extracts of the lives of adolescents in deprived areas of Marseilles, for example.

The video works by Beat Streuli and Nina Könnemann depict everyday street action: young people meet, come and go. Beat Streuli directs the focus onto the seemingly insignificant, onto situations and behaviour that can be observed every day. Nina Könnemann captures scenes of a New Year's Eve on the harbour promenade in Blackpool, England: After the celebrations, the mostly drunk women in their party outfits set off in search of a taxi. The scenes and the behaviour patterns are familiar to everybody from observation or personal experience.

Media- and video worlds
In "Live from Neverland" Paul Pfeiffer uses a sequence from Michael Jackson's statement responding to allegations of child abuse brought against him. On a small monitor, viewers can follow Micheal Jackson's speech without sound. On a large screen a choir recites the same speech parallel to the movement of Jackson's lips. The credibility of Jackson's statement is put into question because of its transfer into the over-dimensional: “By concentrating on the basics, it is possible for the viewer to focus on the manipulation that took place. To a certain extent it is this manipulation that is the subject of the work." (Paul Pfeiffer)

Ryan Trecartin's "Valentine's Day Girl" illuminates the hype that exists for young people surrounding Valentine's Day: A young woman has completely devoted herself to the decorative world of consumption offered at Valentine's Day, and has redecorated herself and her apartment with hearts, balloons, glitter and tinsel. One can sense her emotional connection to this world she has created herself.

Andrea Bowers films adolescents playing the video game Dance Dance Revolution in public amusement arcades. The young people are American immigrants of the first generation. Cao Fei and Mark Leckey also operate in the world of computer games and dance videos. In sequences reminiscent of a music video, Mark Leckey depicts the development of dancing from the northern soul dancers of the 1970s to the raves of the 1990s and how the behavior of adolescents changes with how they dance.

"Why I Never Became a Dancer" is the second exhibition in the cooperation between the Goetz Collection and the Haus der Kunst. In the closet-like rooms of the Haus der Kunst's air raid shelter, Ingvild Goetz will regularly present a selection from her film and media art collection until 2014.

A catalogue will be published by Hatje Cantz publishers.