The exhibition 'Invented Worlds, Inhabited Worlds' broaches the issue of technology transcended by artistic genius. It highlights the special relationship of creative people, those 'technical poets' who, rather than restricting themselves to the utilitarian aspect, base their research on an understanding of existence and the beauty of machines. So through the works of some 20 artists of different generations and with different outlooks, the show offers glimpses of the capacity for invention and wonder, daring and curiosity, hallmarking the human and artistic adventure. 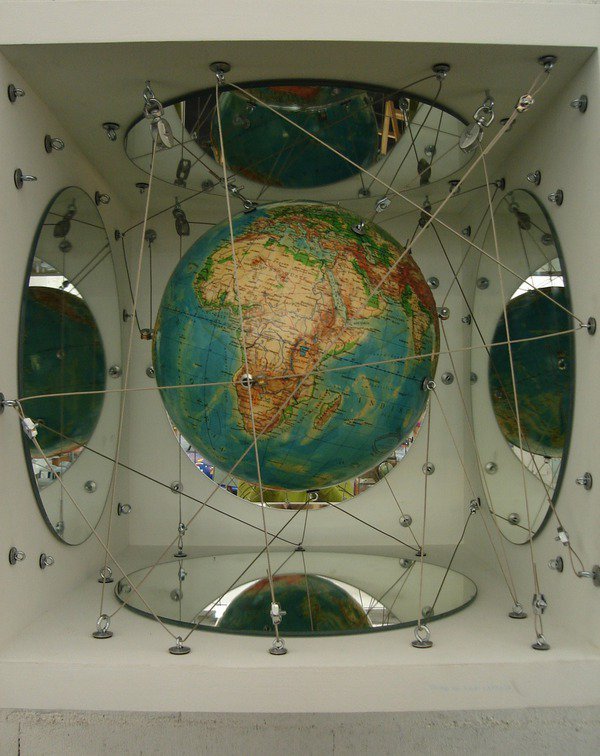 Conceived by curators Marie-Noëlle Farcy and Clément Minighetti, Mondes inventés, Mondes habités (“Invented Worlds, Inhabited Worlds”) unveils the singularity of universes developed by artists who are in turn thinkers, engineers and architects investigating the forces and flux that control and make up our universe, as well as the dynamics that animate it. Attentive to the mechanics of the world, sensitive to its potential energy, as well as to the streams of thought that irrigate it and define it, they tackle in their work questions of a scientific and metaphysical nature.

These often complex artworks reveal the beauty of forces in action, as in the case of Conrad Shawcross and Miguel Palma, or are inspired by artworks such as Mexican Bridge by Chris Burden. Others, like Isa Melsheimer, are interested in architecture as a means of developing ideas about the space we inhabit, the conception we have of it but also its instability. Some (such as David Altmejd) play on materials, whether mineral or organic, recreating phantasmagorical worlds.

Within the framework of the exhibition and according to the program of commissions for the Grand Hall, Mudam invited the English artist Conrad Shawcross to design an installation specifically for this spectacular space. Entitled The Nervous Systems (Inverted), his work is on show until May 6, 2012.

At the opening of the exhibition on Friday, October 7, Paul Granjon presents his performance “Lo-tech songs et servo moteurs”, which is symbolic of his approach to question what he calls the co-evolution of the human being and the machine. Moreover, the artist will give a lecture at Mudam on January 7, 2012, where he talks about his work and his ideas on the development of sophisticated technologies.

Lecture within the framework of the exhibtion
17.01.2012, 6.30pm, in French
PAUL GRANJON : ROBOTS SEXUÉS, ET APRÈS?
Paul Granjon’s installations and performances raise issues linked to what he calls the co-evolution of the human and the machine. In a way often veering towards the absurd, his machines convey questions about technological dependence and the future of humanity. The Robots sexués (“Sexed Robots”) were first shown at the 2005 Venice Biennale. Since then, Paul Granjon has diversified his artistic praxis and constructed quite a lot of robots and other machines.

At last, Mudam is pleased to announce that the exhibition is supported by a new partner, Kurt Salmon.

Mudam Luxembourg
Musée d’Art Moderne Grand-Duc Jean
3, Park Dräi Eechelen, L-1499 Luxembourg
Opening hours
Wednesday-Friday: 11am-8pm
Saturday-Monday: 11am-6pm
Tuesday closed
Guided tours of the exhibition will take place every Saturday at 4pm in French, every Sunday at 3pm in German and at 4pm in Luxembourgish. Every first Sunday of the month, guided tours in English will take place at 11am.