More than 100 pieces from the Moderna Museet collection by artists who profoundly influenced the history of art such as Dardel, Matisse, Leger and Picasso. The presentation has evolved around two main themes: the allure of non-European cultures in the early 1900s and the phenomenon of fertile collaborations between visual artists and artists in dance and performance. A key figure in this exhibition is the theatre producer and director of the Swedish Ballet, Rolf de Mare'. 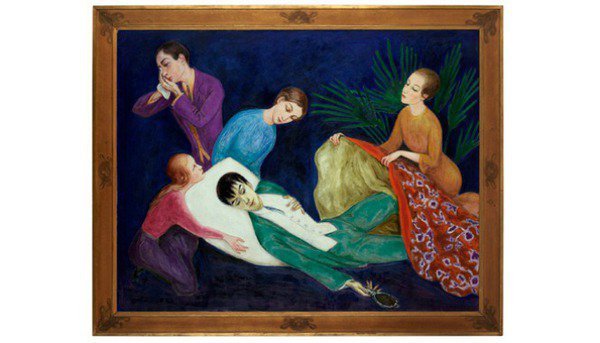 This autumn, Moderna Museet Malmö opens its largest exhibition since the inauguration in 2009. With more than 100 pieces from the Moderna Museet collection of works from 1900 to 1950, Change of Scenes will fill practically the entire museum. Two obvious highlights are The Dying Dandy by Nils Dardel and Apollo by Henri Matisse – two key works from this exciting, revolutionary and innovative period – which will be shown for the first time in Malmö.

Constantin Brancusi, Alexander Calder, Siri Derkert, Isaac Grünewald, Sigrid Hjertén, Paul Klee and Pablo Picasso are seminal artists who profoundly influenced the history of art. In the first decades of the 20th century, they created astonishing works that are now considered to be among the great classics. Change of Scenes highlights more than 100 works by these artists – along with many others – in a generous presentation that captures the special atmosphere of the first half of the 1900s. The exhibition is organised around two main themes that in many ways intertwine – the fascination with non-European cultures in the early 1900s, and the fertile collaborations between artists, dancers and other performers.

–There are thousands of exhibitions just waiting to be created using the Moderna Museet Collection. This time, I wanted to examine what happened when the artists brought modernism to the stage in the 1910s and 1920s, in an attempt to describe movement, space and time in new ways. But this is an unhappy love affair, you could say, where the narrative tradition of the performing arts collided with the modernists who proclaimed art for art's sake, says Cecilia Widenheim, curator of the exhibition.

A key figure in this exhibition is the theatre producer and director of the Swedish Ballet, Rolf de Maré. He went to Paris in the 1920s and soon became a key figure as the radical leader of the Swedish Ballet, the agent of Josephine Baker and a forward looking art collector. Rolf de Maré worked with many of the great names in art, music and literature of his day, including Fernand Léger, Jean Cocteau, Cole Porter, Francis Picabia and Erik Satie. The Swedish Ballet was a success with its innovative performances created jointly by artists, composers and choreographers. Rolf de Maré also donated several key works from his private collection to the Moderna Museet collection. Several of these are featured in Change of Scenes.

The selection of works will emphasise and discuss the alternative "spaces" – both artistic, transnational and gender-bending – that artists in Europe were exploring in the early 20th century. Several film clips will be shown, together with paintings, sculptures, photographs and objects, not only to emphasise the links between dance, fine art and performance, but also to demonstrate how Orientalism, the fascination with "The Other" and with exoticism were expressed at the beginning of the century.

Change of Scenes marks the start of a new series of exhibitions at Moderna Museet Malmö, which will offer a major presentation of works from Moderna Museet's fantastic collection of painting, sculpture, photography and film each year. With the Turbine Hall as its centre, the exhibition spreads throughout the museum. In 2012, the theme will be surrealism, and in 2013 we will proceed to Russian constructivism.