At the 21st Street gallery, Gursky will premiere Bangkok, a new series of large-scale works, in tandem with the majestic Oceans of 2010, which are being shown in New York for the first time. 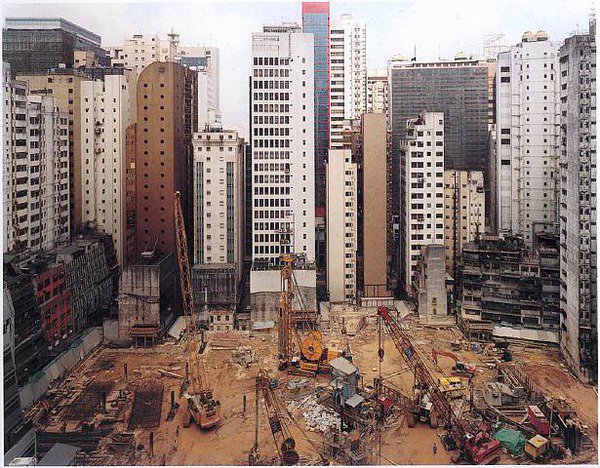 Gagosian Gallery is pleased to announce a major exhibition by Andreas Gursky.

Just as history painters of previous centuries found their subjects in the realities of everyday life, Gursky finds inspiration in his own spontaneous visual experience and through reports of global phenomena in the daily media. The resulting pictures have a formal congruence deriving from a bold and edgy dialogue between photography and painting, empirical observation and artfulness, conceptual rigor and spontaneity, representation and abstraction. Gursky’s world view fuses the flux of life and nature with the stillness of metaphysical reflection.

In the Oceans (2009-10), Gursky relinquished his position behind the camera to work with satellite images of the world as raw material, resulting in contemporary mappe del mondo on a scale befitting the cosmic grandeur of the subject. On a flight from Dubai to Melbourne, Australia, Gursky began watching the flight-path program. Suddenly he saw the graphic representation – which depicts the edges and tips of sharply delineated land masses with wide blue expanses of ocean between – as a picture. The ensuing process from diagram to large-scale photographic work proved to be very involved. He sourced high-definition satellite photographs augmented from the Internet but given that these photographs were limited to exposing the land masses only, he was obliged to generate totally by artificial means the oceans and liminal zones that dominate his own images. Thus, in the darkly nuanced surfaces of the Oceans – for which he even consulted shoal maps to obtain the appropriate visual veracity – Gursky reconciles the division between the machine eye and the human eye, continuing the debates and practices begun in the nineteenth century regarding photography and the issue of artistic expression versus objective science.

Neither empirical nor cartographic but rather determined by compositional principles, Gursky’s Oceans possess that sense of the “terrible” sublime associated with Romantic landscape painting and twentieth century abstraction. The singular image Antarctic – an anthropormorphic land mass as inscrutable and uninhabitable as the sea – acts as a coda to the series: under the portents of global warming the icy, barren continent seems to be raising an apocalyptic finger, despite the beauty in its details.

It was serendipity rather than intention that found Gursky, one year later, shooting the Chao Phraya that flows through Bangkok and empties into the Gulf of Thailand. Nevertheless, the relationship with the Oceans is clear: In the new Bangkok series, he moves in closer on his subject, capturing the details of the fast-flowing urban water mass through the lens of the abstract sublime. A major arterial waterway that is as compromised by manmade pollution as by disequilibrium in the natural hydrological regime, Chao Phraya is revealed by Gursky to be at once a dumping ground for all manner of manmade detritus (used condoms, a child’s bed mattress, a car tire), a crucible for ecological disorder (as evidenced by a dead fish and the pretty but devastating weed known as water hyacinth, floating in the water), and a reflecting, refracting surface for the modern city itself.

It is now common knowledge that ongoing natural disasters and human negligence compromise the well-being of the oceans and, thus, our own long-term existence. Add to this the recent alarm as rising flood waters in and around the Chao Phraya Basin threatened to prompt the next in a string of massive environmental catastrophes. In images that are as conceptually profound as they are formally dazzling, timeless and yet very much of their time, Gursky has touched a topical nerve in contemporary life, namely the impotence of humans in the face of increasing disequilibrium in the natural world that may once again render it uninhabitable.

A large-format, two-volume catalogue, containing sumptuous plates that document the Ocean series as well as selected earlier works and essays by distinguished art historians Norman Bryson and Werner Spies, was published by Gagosian Gallery in 2010 and is currently available.

Opening reception for the artist: Friday, November 4th, from 6 to 8 pm