Over 15 international artists whose work addresses the geopolitical, social and ecological consequences of our dependence on crude oil. Straddling art and scientific research, the interdisciplinary approach that characterises their work aims to raise the public's awareness of the increasingly complexity of global economic interests. 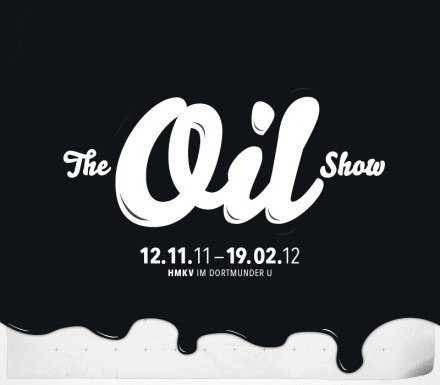 In The Oil Show, on display from 12 November 2011 to 19 February 2012 on the 3rd floor of Dortmunder U, the Hartware MedienKunstVerein has gathered 15 contemporary artists whose work addresses the geopolitical, social and ecological consequences of our dependence on crude oil. Their attention focuses on regions such as the Niger Delta, whose natural resources have been ruthlessly exploited for several decades – a fact which is hardly ever discussed publicly in the developed countries. Straddling art and scientific research, the interdisciplinary approach that characterises their work aims to raise the public's awareness of the increasingly complexity of global economic interests.

The installations, videos, photographs, murals and films in this exhibition evidence that Western societies are going to great lengths to conceal the inconvenient facts on which their centuries-old hegemony is founded, aiming to strengthen our complacent belief in an unrestricted, consumer-driven market economy – fuelled by non renewable fossil resources – as an everlasting, self-stabilising model of growth. But appearances are deceptive, as recent research suggests that the maximum rate of global petroleum extraction, which scientists refer to as 'Peak Oil', was reached around 2006. Despite the conspicuous optimism put on by the PR departments of billion-dollar global oil companies in light of promising oil reserves (for instance in the Arctic), it is an undisputed fact that the global community urgently needs to address the growing problems caused by rising demands for energy and natural resources on the one hand and the decline of available fossil resources on the other hand. With great artistic sensibility, the works in The Oil Show ask questions which are largely shunned by the dominant Western media.

The exhibition at Dortmunder U coincides with the opening of the HMKV's 'white cube', as previously inaccessible areas such as the balconies in the 'Kunstvertikale' (Entrance Hall) and parts of surroundings of Dortmunder U will be used as part of The Oil Show. The artists' duo UBERMORGEN.COM (AT/CH) has successfully probed the ground and will install a drilling platform on the former industrial site, with huge pipelines transporting premium Dortmund oil into the U to be refined. The exhibition venue, formerly the Union beer brewery, is thus turned into a gigantic refinery.

The exhibition The Oil Show is curated by Dr Inke Arns, Artistic Director of the Hartware MedienKunstVerein. It is supported by the Cultural Office of the City of Dortmund, the Ministry for Family, Children, Youth, Culture and Sports of North Rhine-Westphalia, Sparkasse Dortmund, DSW21, the Embassy of the Kingdom of the Netherlands, and Pro Helvetia, Swiss Cultural Foundation. In 2011 the HMKV was furthermore awarded the prestigious JUMP Annual Sponsorship Award for Art Organisations funded by the Arts Foundation of North Rhine-Westphalia (Kunststiftung NRW).

Parallel to the exhibition, the HMKV will present a programme of artists' talks, workshops, theme-related video games, and film screenings within the exhibition.

The work of Carl Michael von Hausswolff and Thomas Nordanstad (SE) investigates the gaping holes left in the social and economic fabric of communities by the disappearance of heavy industry in developed countries as it moves to other, more 'profitable' regions of the world. Their three-channel video installation – comprising the films Hashima, Japan, 2002; Al Qasr, Bahriyah Oasis, Egypt, 2005; and Electra, Texas, 2008 – depicts post-industrial ghost towns in three different regions of the world. Once symbols of a blooming economy, they now epitomise the downfall of areas which become dysfunctional once their resources have been depleted. The artist's work furthermore draws a parallel with the 'shrinking cities' of the Ruhr by highlighting the challenges and problems they face in the wake of far-reaching structural changes.

The works of Ursula Biemann (CH) and Christian von Borries (DE) document the daily life of people who provide the cheap labour that ensures the oil and the money it generates keep flowing. While Biemann's video installation The Black Sea Files investigates the living conditions of communities along the Baku–Tbilisi–Ceyhan pipeline, von Borries's film The Dubai In Me records the megalomania of real-estate development projects in the Persian Gulf as epitomised by the artificial archipelago The World. To do so the artist literally tackles his subject from the ground up, adopting the perspective of the workers on these construction sites. He thus provides a visual counterpoint to the soulless virtual aesthetic used to advertise these projects in the media and provoke the public's amazement.

George Osodi's photographic series Oil Rich Niger Delta documents the daily struggle for survival of inhabitants in parts of Nigeria heavily affected by the ruthless exploitation of oil. Companies such as Chevron, Shell and Total are the country's main economic actors, dictating rather than following its laws. Osodi's photographs, which bear witness to an exceptional level of craftsmanship, reveal the contradiction between the alleged moral standards and actual business methods of some of the West's largest conglomerates operating in an unrestricted global economy. Osodi portrays individuals who despite the destruction of their means of subsistence refuse to relinquish their sense of dignity and autonomy.

Mark Boulos's two-channel video installation All That Is Solid Melts into Air, which borrows its title from a line in Karl Marx's Communist Manifesto, joins the two ends of the global cycle of oil production and distribution by confronting scenes from the Chicago Stock Exchange with the struggle of Nigeria's autonomy movements to regenerate the environment and ensure that the local residents benefit from the revenues of the oil trade.