The Game of Kings

Medieval Ivory Chessmen from the Isle of Lewis. The exhibition takes the form of the endgame of a famous chess match. Each of the pieces is a delightful sculpture in miniature, with a specific, individualized character. 30 chessmen from the collection of the British Museum will be shown at The Cloisters, the branch of MET devoted to the art and architecture of medieval Europe. 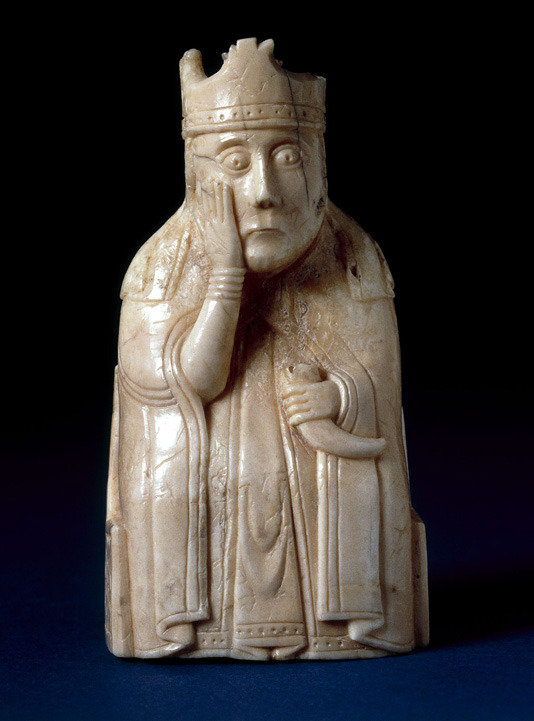 In 1831, a hoard of luxury goods—including more than seventy chess pieces and several other objects, all made of carved walrus ivory and dating from the twelfth century—was unearthed on the Isle of Lewis off the west coast of Scotland. The chess pieces (thereafter known as the Lewis Chessmen), which come from at least four distinct, but incomplete sets, are arguably the most famous chess pieces in the world today, and are among the icons of the collections of the British Museum in London and the National Museum of Scotland in Edinburgh. For this exhibition, more than thirty chessmen from the collection of the British Museum will be shown at The Cloisters, the branch of The Metropolitan Museum of Art devoted to the art and architecture of medieval Europe. This represents the first time such a large ensemble of the chessmen has traveled outside the United Kingdom. After the showing in New York, they will return to London.

The Lewis chessmen are generally believed to have been made in Norway. Stylistic similarities to sculpture point specifically to the Norwegian city of Trondheim, as does archaeological evidence of workshops for the carving of walrus ivory. At the time that the chessmen were carved, the seat of political and ecclesiastical control of the Isle of Lewis was in Norway, and shipping lanes from Norway to Ireland went past the Outer Hebrides. The Lewis hoard may represent a merchant's wares, lost or abandoned on the isle in the twelfth century.

Each of the pieces is a delightful sculpture in miniature, with a specific, individualized character. The kings all sit with their swords on their laps, but some have long hair and beards, and others are clean shaven. The knights wear distinct headgear, carry different shields, and ride different shaggy ponies. Among the warders (rooks) in the exhibition, who are represented as foot soldiers, one bites the top of his shield, barely containing his frenzied eagerness for battle. Scholars have identified such figures as berserkers (the soldiers of Odin from Norse mythology), known from the Heimskringla—the Chronicle of the Kings of Norway—of the poet Snorri Sturluson (ca. 1179–1241).

The exhibition at The Cloisters, in the center of the Romanesque Hall, will take the form of the endgame of a famous chess match. The fallen pieces, organized by type, will be displayed in auxiliary cases along the edges of the room. Examples of medieval chessmen from the Metropolitan's Main Building will also be displayed nearby.

The game of chess is believed to have originated in India in the sixth century A.D., and to have spread west first through Persia, and then through the Islamic territories, until it reached Europe. As played today, chess is an important legacy of the Middle Ages. The piece in the form of an elephant in Indian chess was transformed into a bishop of the church in medieval Europe. And the piece that accompanied the king—his advisor or vizier—became the queen. The Lewis Chessmen are among the earliest examples in which both bishops and queens are found. Although they are now all white, some of the Lewis Chessmen were stained red, according to an early report. (The use of black and white chess pieces did not become standard until later.)

Press Preview at The Cloisters Museum and Gardens. The branch of The Metropolitan Museum of Art for medieval art and architecture, monday, November 14, 10 a.m.- noon