The writer and artist shows his 'Haunted by Objects', an enigmatic collage composed of circa 850 found objects from the holdings of the Israel Museum in Jerusalem. This exhibition is the largest project to date of this conceptual sculptor; it calls conventional museological ordering into question while successfully delineating an image of our multidimensional world in the era of globalization. 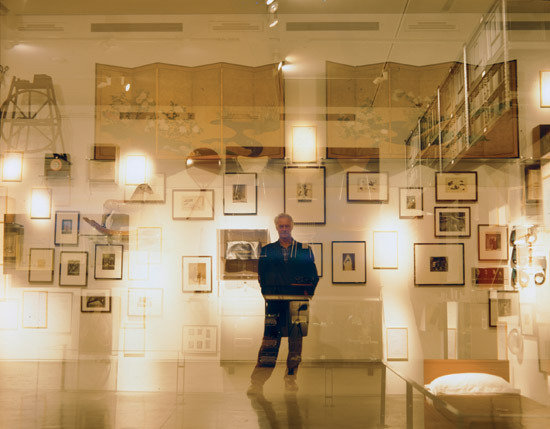 This exhibition is the largest project to date of this conceptual sculptor and author, born in 1947, who has developed an artistic stance since the late 1970s which remains external to the western context, yet at the same time strongly linked to it. His work is a response to the challenges of our globalized world.

Assembled from more than 850 objects and images ranging from antiquity to the present day and originating from diverse cultures around the world, Haunted by Objects is a dense, complex, hybrid cosmos. The point of departure fort he work is a selection of 62 passages from Room 205, the artist newest book. Using a poetic language which incorporates a variety of elements, the book depicts a flashback lasting a single minute which is experienced by someone shortly after awakening in a hotel room. The text gives voice to a state of consciousness which reside between daydreaming, fantasy, and hallucination, and in which fragments of the protagonist’s ownlife are fused with artistic, cultural, and philosophical reflections in a kaleidoscopic fashion. In a large room with subdued illumination, eachtextual fragment appears surrounded by a clusterof objects which refers to its content in a varietyof ways, and which cover all of the walls. Thesheer abundance of objects and the richly associative language of the texts allow an infinite number of individual observations and interrelationships to emerge – albeit in the absence ofany preestablished system designed to provide a clear sense of orientation or to specify unambiguous connections. Some aspects present themselves with the greatest clarity, while othersslip away toward the margins of comprehensibility. In keeping with Goldstein’s artistic mission, "fantasy and theory, the conceptual and the aesthetic, context and ontology, biography andideology" combine on equal terms to form aunity which is found "between culturally centraland peripheral modes of existence."

As a whole, Haunted by Objects is the grandiose attempt byan artist to use cultural objects and the narratives and worldviews preserved in them to give voice to his own sense of fascination. At the same time, this work calls conventional museological ordering into question while successfully delineating an image of our multidimensional world in the era of globalization.

This exhibition was organized by The Israel Museum, Jerusalem.
All of the objects seen in the installation are drawn from the Museum’sencyclopedic collections.

Catalog
Accompanying the exhibition will be a 65 page catalog with color illustrations of the installation and a conversation between Zvi Goldstein and Julian Heynen, as well as a list of the exhibited works (German/English, €13).