Hellraiser. The notion of power comes out in representations that deal directly or metaphorically with issues like violence, religion, moral, sex, discipline and fear. On view drawings, sculptures, paintings, surfaces, installations, wall paintings. 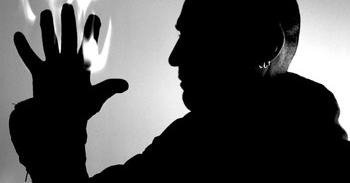 Kendell Geers’ work formulates a critical and iconoclast standpoint almost atypical in the contemporary artistic landscape. As the main line in his work, the notion of power comes out in representations that deal directly or metaphorically with iissues lik violence, religion, moral, sex, discipline, fear.

Geers undermines the system of values set by our Western society and harshly reveals some aspects that are usually left in the dark: struggles for power, racism, coercion, injustice, exploitation of the weakest, feigned puritanism. Far from the moralist, right-thinking tone that characterizes the so-called “political art”, Geers presents himself instead as a “terrorealist” (according to his own formula) who indecently exposes the reality without distorting ideological filters. He doesn’t hesitate to use forms and expressions which provoke for their violence and their authoritarian or sexist character to unsettling the ideals of racial ideological or religious purity.

While relying on recurrent visual motives and humble materials (glasses stick on various supports, statues wrapped into the adhesive tape used by the police to circumscribe crime areas, black painting or ink dripping, construction materials), Geers’ works appear like signs that interfere and destabilize a system which legitimacy is based on the tacit omission of its dysfunctions. As Pierre Olivier Rollin, curator of the exhibition observes: “in this exhibition, the artist will articulate some works realized in the last years along with his most recent production: drawings, sculptures, paintings, surfaces, installations, wall paintings.

The exhibition synthesizes a series of concerns that have permeated the artist’s practice since his beginnings: the conjunction of extreme positions, the transformation of images and objects, the political reinterpretation of ready-made, minimalism and conceptual art, the alteration of senses, the aporia of language. Assembled in a large “cluster hanging”, works from various periods, media and expressive forms will compose an extended installation, increasing their levels of understanding. The works’ layout deliberately opens a multiplicity of interpretations that bring the works in their deep coherence and ramifications.”

The works exhibited at ADN surprises for its communicative efficiency: they are simple and determined, well structured and visually attractive. The aesthetic dimension of the works functions as a counter-weight for their provoking and violent contents. This ironically recalls us that violence is, also, “glamorous”, and produces fascination and addiction. The title of the exhibition, Hellraiser, plays with this dual vision of a figure that is desired just for being powerful and dangerous. A large wall painting takes the well-known “LOVE” pattern of Roberto Indiana and turns it into a weaving of graphic signs up to make it unrecognizable, decomposed into alphabetical characters and abstract or tribal forms that look like stylized razor blades. The same impression of latent threat emanates from an installation composed by bricks suspended over the visitors’ head. Several sculptures in bronze reproduce some typical motives of Geers’ visual and symbolic field of references: religious, political or popular icons like the Belgian “Manneken Pis”, variations on African statues, daily objects with fingerprints or moldings of parts of the artist’s body. The display also includes a series of interventions on images appropriated from magazines and a new series of pornographic drawings that play with the voyeuristic condition of the spectator, who sees her/himself reflected on the support of the artworks.

The whole selection of pieces relies on black humor and obscenity; it shows the artist’s clear predilection for a bitter use of blaspheme and a smiley and caustic provocation. Language itself, as an essential component in Geers’ work, has a double face: the enigmatic phrases appearing in his drawings or painted on the walls hide standard words and concepts which have often been “stolen” from artistic or political discourses. Geers ill-treats and transforms language, aware of its ambivalence and properties to manipulate the public. Facing the works, the spectator has no other choice than confronting his/her own adhesion to this phantasmagoric script and his/her level of involvement and enjoyment enjoyment.

Despite his iconoclastic tone, the artist’s expression is rarely univocal, since he keeps his own position ambiguous. Likewise, his biography and personal mythology follows the same scheme of ambivalence; from his identity as white man born and raised in South-Africa and militancy against the regime of the Apartheid, to his own decision to adopt 1968 as his symbolic date of birth, Geers exploits his personal history and constructs for himself a fictional character, while the discourses of the art establishment utilize these inputs to render, in turn, as a subversive icon.