A retrospective exhibition. On display, as both vintage and modern prints, are photographs that record daily life in America, from Vietnam War protesters and Harlem fashion shows, to street life in Greenwich Village and weddings in Little Italy. 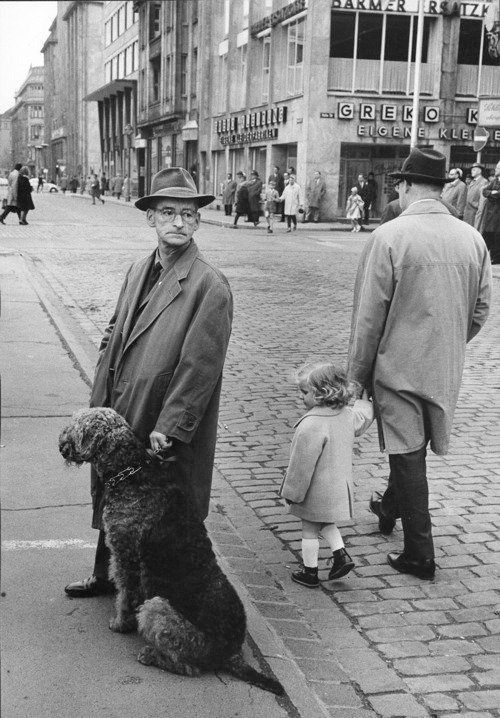 Born in Brooklyn, 1929, to working class Jewish immigrants from Belarus, Freed originally had ambitions to become an artist, however in 1954 he was to study photography at the New School under the esteemed Harpers Bazaar Art Director, Alexey Brodovitch.

The photography he produced from this time was imbued with a uniquely humanitarian vision. Exhibited here, as both vintage and modern prints, are images drawn from two of Freed’s most significant American projects, Black in White America (1964-1965) and Police Work (1972-1979) as well as documents reflecting his lifetime interest in his Jewish heritage. Alongside these are photographs that record daily life in America, from Vietnam War protesters and Harlem fashion shows, to street life in Greenwich Village and weddings in Little Italy.

Shortly after his studies, Freed embarked on a two year journey, hitchhiking through Europe & North Africa. The resulting images were published in Freed’s first book Jews of Amsterdam (1959) & a solo exhibition in the Netherlands. It was whilst on this journey that Freed’s interest in civil rights developed, after he photographed a black American soldier at the Berlin Wall and was shocked at the contrast between the man’s loyalty to the West and the struggle he perceived back home for basic civil rights.
Returning to America in the early 1960s, Freed embarked on a project which was to define his career; the documentation of Harlem and the Deep South, illustrating the inequalities between being black or white in 1960s America. The astounding images, many selected for this exhibition, including a women entering a ‘whites only’ launderette in New Orleans and the tenderness between two impoverished sisters in South Carolina, were published in Freed’s landmark book Black in White America (1967) and were to propel his photographic career. Freed would later photograph pioneering civil rights figure Dr Martin Luther King, the 1963 March on Washington and the rallies performed by the Congress of Racial equality.

Also included in this exhibition are celebrated images from Police Work, a project started by Freed in the early 1970s as a counterweight to what he saw as the police victimization by young middle-class antiwar protestors. Freed wanted to examine the police up-close and his intimate portrayal depicts neither stereotypical thugs nor saintly guardians, but harassed, badly-paid working class men simply trying to feed their families and negotiate violent terrain. Images such as a policewoman playing with local kids in Harlem, and a police officer relaxing in his pool with his family, demonstrate Freed’s ability to tackle subjects with humanity and compassion. A book of the work was published in 1980 and shown at The Photographers' Gallery, London in 1973 under the title ‘The Spectre of Violence’ – a dramatic life-sized restaging involving entering the gallery through a black curtain and the discovery of a ‘corpse’ at the bottom of stairwell.

Freed’s Jewish heritage has been a reoccurring, lifetime theme and his coverage of the Yom Kippur War and events in Israel in the late 1960s deservedly granted him Cornell Capa’s epithet ‘The Concerned Photographer’. Freed published numerous bodies of work on the Jewish community in countries such as the Netherlands and post-war Germany and the images included in this exhibition feature of Freed’s continual documentation of Jewish life in his American birthplace; Hassidic weddings, Jewish schoolboys and Brooklyn synagogues.

Leonard Freed produced significant essays on Poland, Asian immigration in England, North Sea oil development, and Spain after General Franco. He shot four films including The Negro In America (1968) and Joey Goes to Wigstock (1992) and his work was widely published in major magazines such as Life, Look, Fortune, Paris-Match and Sunday Times. He died in Garrison, New York, on 30 November 2006.

A wider selection of Freed’s photographic career is currently touring as the 230 piece exhibition Worldview curated by Bill Ewing, Lausanne, and published by Steidl (2007).

Opening: december 6th, 7pm
Leonard Freed's widow Brigitte will be in Munich for the opening.