Post-War Sculptures and Spaces of Contemporary Art. The show is dedicated in both a focused and comprehensive manner to the central theme of the human condition and its fragility. The sculptures of the postwar era and spaces of contemporary art visualize with great immediacy how the various artists come to terms with the conditio humana. 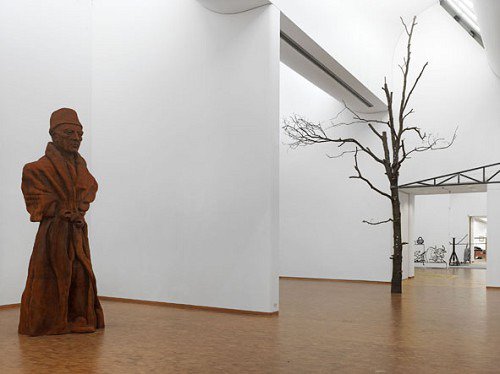 Every day, human dignity is infringed upon millions of times around the world. We can find out about injustices that are testified by diverse media at any moment. The exhibition Before the Law is dedicated in both a focused and comprehensive manner to the central theme of the human condition and its fragility.

In this exhibition, Franz Kafka’s parable “Before the Law” (1915) served as mental and metaphorical point of departure. The tale tells about a man from the country who steps before the law. Before the law stands a doorkeeper who will not let the man pass. The country man who does not know about the achievements of the Enlightenment remains excluded from the law all his life. In contrast to its common meaning, Kafka depicts law as a spatial expansion. Thanks to this parable, one can be positioned outside the law. This individual has neither rights nor duties; the law is a refuge for him. With regards to human rights, this text shows that it is neither possible to stand outside an inborn right nor to move there physically.

Before the Law combines figurative sculptures from the post-war era with contemporary positions, spanning an arc across the last sixty years. The catastrophe of World War II constitutes a fundamental break with human rights and human dignity that has been determinative of our contemporary understanding of these values, as reflected for example in the first article of the German constitution. Against this backdrop, the works of the post-war years – which portray with great directness the oppressed, wounded and threatened human being - form the argumentative core of the exhibition.

Statues by Germaine Richier, Gerhard Marcks, and Alberto Giacometti give the traumatized human a face and a body, finding artistic forms with which to express the speechlessness of that time. They form the starting point for the viewer’s contemplation of contemporary installations by artists such as Phyllida Barlow, Paul Chan, and Zoe Leonard. In contrast to their historical “role models” these works have largely abandoned figurative portrayal, approaching the ever more complex and splintered conditions of present-day human existence by way of spatial dimensions and diverse materials.

The exhibition Before the Law not only demonstrates the persistent topicality and expressiveness of postwar figurative sculpture, but through its historical context also puts into focus the humanistic potential of contemporary art. In times of increasing insecurity and fast-paced living, it seems necessary to address a type of art that insists on earnestly coming to terms with the human condition.

In preparation of the exhibition talks will take place, which deal with the basic question of human dignity in relation to the construct law:

No Entry - Talks about the exhibition BEFORE THE LAW