The exhibition spans the whole of Gursky's oeuvre up to the very latest photographs presented this autumn in the artist's gallery, Gagosian Gallery in New York - and thus gives the viewer the opportunity to follow the transformations and transformative powers of the images through more than two decades. 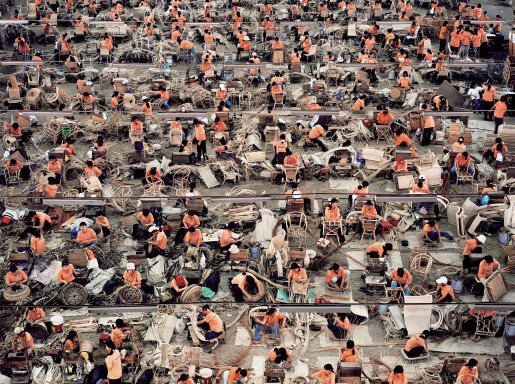 With their visual mastery, the works of the German photographer Andreas Gursky insist on the vast, fascinating power of the image and stand as a modern proposal for what beauty may be. Andreas Gursky’s photographs are the answer of art to ‘extreme sports’. His works grow out of hours of effort interweaving hundreds of pictures taken with the most sophisticated equipment, often from extreme positions, into one image.

Louisiana Museum of Modern Art opens the exhibition year 2012 with a presentation of around 40 giant photographs and a number of smaller works created by the world-famous German photographer Andreas Gursky (b. 1955 in Leipzig and living in Düsseldorf). For more than twenty years he has worked with large-format photography that matches the large, composed pictures of painting and seduces viewers into believing that, with the technically perfect photo, they have come close to reality. But this is not the case. On closer scrutiny there is something fundamentally wrong with Gursky’s pictures. As it turns out, most of them represent something that can be seen, however, they are not themselves a product of someone who has seen – not even with the eye of the camera. He himself calls the works “visual structures or systems”. Gursky builds up his pictures in the computer from his photographic shots, often taken from a high tower or a helicopter – he is the answer of art to ‘extreme sports’ – but the final picture itself grows out of hours of work interweaving the many individual images into one.

Gursky is first and foremost a visual artist. The photograph – and the incredible potential of the programs of the computer – are his resources for creating pictures that are about something, pictures that work, pictures which by virtue of their similarity to reality challenge all the other images we have of what we believe to be real. Precisely by flirting fundamentally with the potential truth of the image – the traditional virtue of photography, from journalism to the courtroom – and then bringing the images into play in one overarching strategy that has fascination as its focus, Gursky insists on the necessity of the artistic image in our constant efforts to know the world in which we exist.

The exhibition spans the whole of Gursky’s oeuvre up to the very latest photographs presented this autumn in the artist’s gallery, Gagosian Gallery in New York – and thus gives the viewer the opportunity to follow the transformations and transformative powers of the images through more than two decades.