Living Inside the Grid

A museum-wide exhibition of twenty-four international emerging artists, conceived by Senior Curator Dan Cameron. Living Inside the Grid showcases a group of artists working independently who all use the grid motif to describe the myriad challenges of living in a world increasingly controlled by institutions, technology, and media. 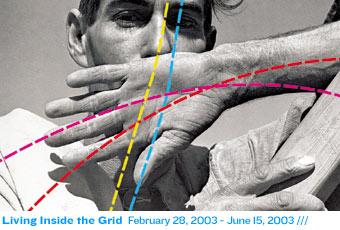 The New Museum of Contemporary Art is pleased to announce Living Inside the Grid, a museum-wide exhibition of twenty-four international emerging artists, conceived by Senior Curator Dan Cameron. Living Inside the Grid, on view from February 28 through June 15, 2003, showcases a group of artists working independently who all use the grid motif to describe the myriad challenges of living in a world increasingly controlled by institutions, technology, and media. Thirty-six computer-based works, sculptures, videos, photographs, and drawings will fill the Museum's entire 12,000 square feet of galleries. Living Inside the Grid is informed by Dan Cameron's curatorial research and travel over the last five years and marks his first group exhibition at a U.S. museum since 1982.

The artists featured in Living Inside the Grid explore both the possibilities and the limitations for human interaction within the inescapable grids that surround and inform our daily lives. As Dan Cameron writes in his catalogue essay: "From morning commutes - whether in a car moving along a highway, a subway on a magnetic rail, or even a walk in the grid of city streets-all the way to the last check of our e-mails at night, we involve ourselves in an infinite network of grids, which act in obvious or hidden ways to order our movements, our work, our thoughts, our leisure time and probably our dreams."

What all of the artists share is the recognition that, whether for better or worse, grids have come to define every aspect of our lives. Addressing a wide range of themes in their work-from architecture and urban design to the environment, homelessness, war, and power - these artists posit that the grid's presence in our daily lives is inescapable. Rectilinear systems of organization have become so necessary to the smooth functioning of our society that it is becoming increasingly difficult to envision "living off the grid." Furthermore, many of the artists indicate that the grid presents a constant competition between the forces of order and chaos.

Seven artists are creating new works especially for Living Inside the Grid:

JOSE DAMASCENO
Brazilian artist Jose Damasceno creates site-specific sculptures using hundreds or even thousands of individual elements, such as pencils or chess pieces. From up-close, Damasceno's sculptures seem to verge on chaos, while a more distanced perspective yields an orderly arrangement. For the New Museum, Damasceno will produce a three dimensional color sculpture of a statistical pie chart made of interlocking parts, as well as two drawings comprised of numbers stamped repeatedly on the walls.

MICHAEL ELMGREEN & INGAR DRAGSET
Berlin-based Danish collaborative Michael Elmgreen and Ingar Dragset are well-known in Europe for their room-size installations that explore the function and value of objects and environments. Elmgreen & Dragset will add to their recent series of "Powerless Structures" by installing a prison door with a peep-hole within the New Museum.

RICO GATSON
American artist Rico Gatson will exhibit a new piece in his video series in which he takes fragments of well-known American movies and music, digitally manipulates them, and turns them into kaleidoscopic tapestries. Commenting upon racial stereotypes in Hollywood, Gatson's work points to the grid's ability to collectively entrap us, so that we can barely discern its influence on our behavior.

RITA MCBRIDE
American sculptor Rita McBride is drawn to the hidden design aspects of urban life, whether they are parking garages, ATM machines, or air conditioning ducts. In recent years, she has been creating interventions in existing architectural spaces that echo functional details through fragile materials such as glass and porcelain. For the New Museum, McBride will build a glass conduit that runs vertically along the walls of the Museum's galleries, appearing to pass directly through the floors and ceilings of the building.

DANICA PHELPS
American artist Danica Phelps creates elaborate visual collages based on her daily artistic and economic activities, for example, buying groceries, selling her work, and collecting art. Using receipts and color-coding, Phelps constructs graphlike paintings and drawings that order the complex choices she makes on any given day into a visual system. For the New Museum, Phelps is exhibiting Artist, Collector, Curator, Spy, a new work that documents her trip to the Basel Art Fair and Documenta XI.

DO-HO SUH
Do-Ho Suh is a Korean-born artist based in New York whose projects attempt to reconcile the American notion of individuality with the Asian-based principle of group identity. The grid is a subliminal constant in Do-Ho Suh's work, as he tries to find order in the social world. For the New Museum, Do-Ho Suh has created a life-size wardrobe made from soft, translucent scrim.

ANA MARIA TAVARES
Brazilian artist Ana Maria Tavares transforms rooms into fictional zones that appear to be functional but are actually intended solely for the viewers, who are invited to enter and explore these rooms. Tavares will transform the New Museum's lobby using stainless steel and mirrored objects, a checkerboard floor, seating stations, and animated videos. Visitors will be invited to step into the New Museum's Window on Broadway as part of Tavares's installation.

Some of the artists in Living Inside the Grid help to focus attention on the grids that surround us daily. Egbert Trogemann, for example, photographs television game show audiences in the moment just before the host appears, capturing the shared vacuity of their faces. Mark Lombardi reveals the shady dealings of the Iran Contra scandal by graphing the legal and illegal exchanges of funds and weapons among political, military, and business entitites.

Other artists focus on architecture. N55 and Roland Boden have both created self-sufficient and portable housing units, thus imagining an alternate world where grids are used to positive ends.

In addition to Jose Damasceno and Danica Phelps, Douglas Blau creates new grid-like systems with his work. Blau's The Annunciation is an assemblage of uniformly framed found images brought together to form a tightly constructed narrative that unfurls seamlessly as a viewer walks through the work.

Several artists in Living Inside the Grid subvert and manipulate grids, using technology to create works that rely on surprise, random-ness, and human interaction. For instance, in Camille Utterback's site-specific installation, navigational software tracks the movement of visitors in the Museum through their body heat and transforms that data into a dazzling system of vectors and colors that are projected onto the gallery wall. Langlands & Bell's Frozen Sky is a computer-animated work that randomly generates three-letter airport codes, which flash across the gallery's walls (eg. LHR = London, Heathrow; CDG = Paris, Charles de Gaulle).

Living Inside the Grid is part of Spatial Dynamics: Perceptions in a Digital Age, the New Museum's unprecedented exhibition series exploring the growing confluence of technology, architecture, and urbanism in contemporary art and culture. Out of Site (June 27 - October 13, 2002) featured fictional architectural spaces that ranged from digitally rendered interiors to futuristic science fiction cities. Super-ficial: The Surfaces of Architecture in a Digital Age, on view in the Zenith Media Lounge January 31 - April 6, 2003, presents recent architectural projects that propose unique solutions for the surfaces of varied sites and structures through a range of media including digital animations, architectural plans, models, and websites. Living Inside the Grid is the third and culminating exhibition.

Public Programs
Saturday, May 3, 2003, 10:30AM-6PM,Talking About Living Inside the Grid In this all-day symposium, co-sponsored by the Irwin S. Chanin School of Architecture, Cooper Union, speakers including Manuel Delanda, Peter Halley, Laura Kurgan, Sean Snyder, and Susan Kozel will consider how "living inside the grid" affects our concepts of space and time and how our bodies are increasingly connected to geographic, communications and surveillance grids, among other questions. Reservations for this event are requested and can be made by calling 212-219-1222 x 215. The symposium will be held at the Great Hall, Cooper Union.

Funding
Living Inside the Grid is made possible by the American Center Foundation and by the National Endowment for the Arts, a federal agency. Additional support has been provided by Eugenio Lopez, the Toby Devan Lewis Fund for Exhibitions of Emerging Artists and the British Council.

About the New Museum of Contemporary Art
The New Museum of Contemporary Art, founded in 1977 and located in the heart of Soho, is the premier destination for contemporary art in New York City. With an annual schedule of dynamic exhibitions, the Museum presents the most innovative and experimental work from around the world. Debate and discussion about contemporary culture are encouraged through a broad range of educational programs, publications, performances, and new media initiatives. The New Museum recently announced plans to build a new, 60,000 square foot facility at 235 Bowery.