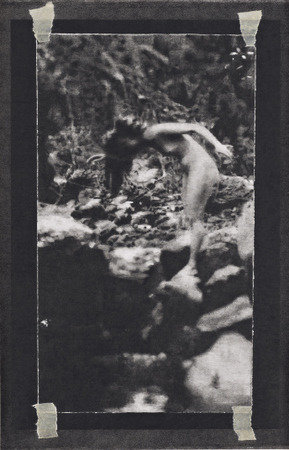 The FLAG Art Foundation is pleased to announce Richard Forster's first solo exhibition in the United States on view January 21st through May 19th, 2012. Forster produces highly detailed pencil drawings presented in series, three of which are included in this exhibition: pastoral nudes, seascapes; and 24 drawings of an archival video documenting the construction of pioneering social housing in Dessau, Germany in 1926. The latter two groups will travel to FLAG from his 2011 exhibition, "Fast & Slow Time" at The Middlesbrough Institute of Modern Art, UK and the pastoral nudes, collectively titled "American Pastoral", will be on view for the first time at FLAG.

At first glance, these three groups of drawings appear distinct from each other. But the shared experience offer the viewer a metaphorical triangle built from fragments of time and information. This triangle is a rich meditation on place; the artists' hometown of Saltburn-by-the Sea, the former German Democratic Republic and an American pastoral of the 1920's. The drawings depict a chronology of physical space as well as fragments of social and political history that are equally entwined within 'place.'

The exhibition is accompanied by a catalogue including an essay by award-winning novelist Colm Tóibín.

Richard Forster was born in 1970 at Saltburn-by the Sea, England. He has exhibited widely in the UK and made his first appearance in the United States, in February 2011, in the acclaimed group exhibition "Drawn from Photography" at The Drawing Center, NYC. Richard Forster is represented by Ingleby Gallery, Edinburgh, UK.

The FLAG Art Foundation is pleased to announce the exhibition In Living Color, on view January 21st through May 19th 2012. The exhibition presents a chromatic study from a wide range of artists including: Assume Vivid Astro Focus, Kristin Baker, Olaf Bruening, Dan Colen, Mark Grotjahn, Anselm Reyle, Gerhard Richter, Fred Tomaselli, Cy Twombly, and Rachel Whiteread. The majority of the works being shown have been completed in the past 2 years and many are on view for the first time in America. Several have never been shown at all prior to this exhibition.

Among the newly completed works are Kristin Baker's Once in a Mooning, a night sky streaked with hues of luminescent blue injected with electrifying pink. Dan Colen created Zero for Conduct, a flower painting of deep reds, purples and blues specifically for the exhibition.

The following works will be on view in the United States for the first time: Gerhard Richter's digital print Strip is comprised of a system of parallel lines generated by dividing an earlier abstract painting by the artist vertically into a pattern of 8190 strips. Shown in Athens at the last gallery exhibition of his work prior to his passing, Cy Twombly's Leaving Paphos Ringed with Waves (IV) employs rich tones of turquoise with vermillion and yellow to portray the Mediterranean landscape and reference ancient literature and mythology. Rachel Whiteread's sculpture A.M. from her last show at her Rome gallery, inhabits the negative space within a windowpane, utilizing a jewel-like pink resin.

The exhibition explores color in a variety of contexts and ranges: within a framework of order and chaos, as a signifier of time and place, in relation to the medium of the work, and in monochromatic forms.