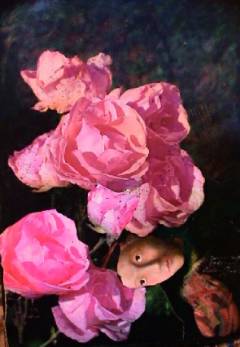 In pairing these two well-established artists, PSCA is presenting the highest quality artworks from two mature artists who recently have had solo shows in museum venues. Christian had a major retrospective at the Tyroler State Museum in Austria in 2000 and Garfinkel had a solo exhibit at the Ulrich Museum in Kansas this past summer.

Christian brings his lively humor to this new series of work, created especially for this show in New York City. His expressionistic style reverberates with color and imagery to create a visual intensity rarely found in paintings today. Compositions are full of juxtapositions and challenge the viewer. Recurring themes in Christian's work throughout his career include escapism, memory, the impact of current political affairs, and personal and family experiences. Often in his work, polar elements are represented as diametric states of being. His concern is in the human condition and he often depicts the paradox of nature with the paradox of mortal life. In these paintings, beautiful images of flowers are juxtaposed with heads and other human forms, depicting the human relationship to both nature and to self in terms of searching, experiencing, and even hiding. Christian has exhibited his work and has been published since the early 1960s. This internationally renowned artist is well understood in Europe, but is not as well known in New York. This exhibit presents 10 new works. Christian premiered a series of a dozen works, based on the photography of Roman Vishniac, at PSCA in 2001 which subsequently travelled to Galerie Thoman in Innsbruck.

Garfinkel took inspiration from the discovery of Can Cri (or Cancri), a new extrasolar system in the Cancer constellation, 41 light years from New York. Garfinkel routinely searches to far off places for inspiration in her work, whether it be persons of importance from her past (a new series of "portrait" paintings - large, abstract, intensely personal canvasses), or from Japan and China. This past fall, the Ulrich Museum presented 10 works from her Obi series and published a full-color brochure with text by David Butler. The works she presents in this exhibit at PSCA are both playful and whimsical, and suggest beautiful sculptural volumes. She first pulls woodcut prints and then uses these as elements for the final collage, cutting the woodblock prints and rearranging elements into a unique new work. Due to the original inspiration for these works, they posses a playfull quality, perhaps George Jetson or Spacely Sprockets would be collectors. Butler's commentary on Garfinkel's work applies to the spirit of these new pieces when he refers to the interplay between shape, color, and pattern in Garfinkel's work; "the overall effect is one of an exquisitely calibrated, harmonious order. Matisse himself could hardly have done better."

The gallery is open on Wednesday through Saturday from Noon to 6 PM, and by appointment.

Image from the exhibit "I LOVE THESE PEOPLE IN MY GARDEN": ANTON CHRISTIAN Dutch Visitors, 2003, Acrylic and Photo on Paper, 37.4 x 24.8 inches