The solo show by Slominski will centre on his series of polystyrene pictures. Stylised naturalistic patterns and geometric structures are carved into huge chunks of snow-white polystyrene. In the series of photographs by Adelfang the viewer experiences an almost corporeal reaction via the lens and, by extension, the artist's point of view. 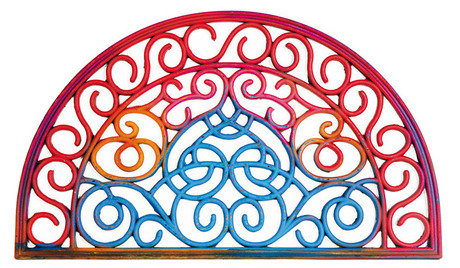 Galerie Thaddaeus Ropac is delighted to announce its second exhibition of works by artist Andreas Slominski, who lives between Berlin, Hamburg and Werder (near Potsdam). This will be Slominski's first solo show in France.

Born in Meppen (Germany) in 1959, Slominski attended the Hamburg Academy of Fine Arts from 1983 until 1986. After teaching in Karlsruhe, he succeeded Franz Erhardt Walther at the Hamburg Academy in 2004. Important solo exhibitions in the Deutsche Guggenheim Museum in Berlin (1999), the Fondazione Prada in Milan (2003) and the Serpentine Gallery in London (2005) were followed by a comprehensive retrospective in the Frankfurt Museum of Modern Art (2006-07). In 2010, the Goetz Collection in Munich held an exhibition of their extensive range of the artist’s works.

Since the mid-1980s, Slominski has pursued his aesthetic exploration of random perceptions of everyday life.

"There is often something insidious, even impish, in the inconspicuousness of the selected objects and materialities. The function, the context and the contents are always reversed. [...] Randomness becomes a strategy. The works often have a double meaning, and the viewer sometimes lands in a trap" (Mario Kramer).

Slominski has always pursued the principle of the trap with encyclopaedic and almost scientific precision. His trap sculptures actually work; they take many forms, and are probably his most popular series of works.

The Paris exhibition will centre on his series of polystyrene pictures, which he first exhibited in 2005. Stylised naturalistic patterns and geometric structures are carved into huge chunks of snow-white polystyrene, rather like icebergs. On these often brightly spray-painted picture supports – reminiscent of graffiti, while appearing to profane the genre of the classic marble relief – are applied toy-like cut-outs with the simplicity of illustrations in children's books. The artist's personal style almost vanishes in the illustrative character of these works, which are presented like a herbarium in a plexiglass box, as a persiflage of the Nouveaux Réalistes' claim to realism. As if the works were the product of a mysterious, spontaneous chemical transformation.

Slominski's works evince an extremely democratic view of the subjects he uses. He finds beauty in objects that are generally considered in bad taste, and fondly adopts them in his works. Thus an industrially made rubber doormat resembling cast-iron becomes a template for the spray-painted parts of the paintings. Slominski's use of the mundane motif of a doormat could be developed into a complex Christian view of the world, where the value of work is judged differently from the way it is in today's global business environment, rife with virtual financial speculation. Tiny objects and details in Slominski's polystyrene pictures – whether coins, buttons, screws, shoes or ties – can become the starting-point for intellectual discussion, or simply count as an expression of a positive and optimistic world view. These polystyrene pictures in particular are open to either interpretation.

Boris Groys remarked on Slominski's work: "I thus have the impression that everything Andreas Slominski does is a reference to something else. This is where the actual power lies. Fundamentally, the power to direct attention is absolute power." In connection with the polystyrene pictures, Stephan Urbaschek quotes a very apt remark made by Max Ernst in 1962, when talking about the technique of collage: it is "the systematic exploitation of the random or the artificially provoked encounter of two or more completely alien realities at a seemingly unsuitable level – and the spark of poetry that flashes when these approach each other".

Galerie Thaddaeus Ropac is delighted to present Monuments, its first showcase of French artist, Claire Adelfang’s work. Born in 1984, the photographer currently works and lives in Paris, her native city. Adelfang graduated from the Ecole Nationale Supérieure des Beaux-Arts, and was trained in Patrick Tosani’s atelier.

The exhibition title was selected because the young photographer readily summons the Latin origins of the word monere, “to remind”. The diversity of subjects she brings together under this heading conveys the link between the gaze and memory.

In this series of photographs, the viewer experiences an almost corporeal reaction via the lens and, by extension, the artist’s point of view. In Labyrinth (2011) and Dry Dock - Louis Joubert Lock (2011), the concrete and water landscapes are inspired by the tide gates located in Munich and in Saint-Nazaire. The bird’s eye views and tilted shots enable Adelfang to counterbalance the perspectives and to play with the lines of the structures. The artist accentuates the surreal nature of these environments devoid of human presence. A corporeal adventure and spiritual experience, the viewer’s body seems to partake in the eye’s feverish descent. The play on perspectives in Alcove (2011) and in Wall of Water (2011) abolishes the horizon line and any possible assessment, from top to bottom, of dimension. It’s only when one’s gaze settles on the background that one confronts the monumentality and the scale of the setting. With Cascade (2011), the heft of the architecture contrasts sharply with the fluidity of the water. Adelfang seemingly evokes some long-lost civilisation where life, as epitomized by the water and the scarce vegetation, seeks to reach a sense of equilibrium in a completely inorganic, mineral universe.

The photograph depicting the Synagogue Ohel Jakob (2011)—which was inaugurated in 2006 in Munich’s Jüdisches Zentrum Jakobsplaz—deepens, in a singular way, the notion of memory already embedded within the monument. This image highlights the semantic complexity of the exhibition’s title, which bears both a physical and a symbolic dimension. Again the viewer is faced with the prominence of the inorganic, also present in many other shots, through the base of an architectural form evocative of Jerusalem’s Wailing Wall. From this perspective, Adelfang’s photographs develop an unspoken, contemplative dialogue between man and history.

Claire Adelfang’s photographs and videos first received attention in 2010 and 2011 in exhibitions overseen by the association Les amis des Beaux-Arts de Paris, after being awarded the agnès b. prize in 2009 and the Thaddaeus Ropac prize in 2010. In tandem with Monuments, her work will be presented as part of the group show The Tree and the Photographer, at the Quai Malaquais galleries of the Beaux-Arts de Paris.