The exhibition 'Rembrandt and Degas 'will feature a series of early portraits by the two artists and highlight the Dutch master's guiding influence on the young French Impressionist. 'The Steins Collect: Matisse, Picasso, and the Parisian Avant-Garde' will unite some 200 works of art to demonstrate the significant impact the Steins' patronage had on the artists of their day and the way in which the family disseminated a new standard of taste for modern art. 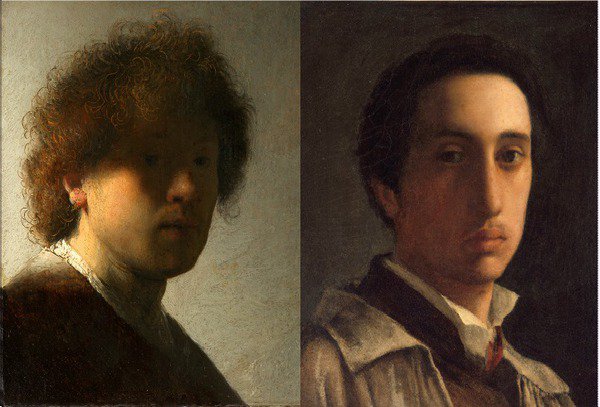 curated by by Susan Alyson Stein, Curator, in the Museum’s Department of European Paintings.

Rembrandt and Degas: Portrait of the Artist as a Young Man, on view at The Metropolitan Museum of Art beginning February 23, will feature a series of early portraits by the two artists and highlight the Dutch master’s guiding influence on the young French Impressionist. The first exhibition to examine this subject, it will unite some two dozen works by the artists, including oil portraits, drawings, and etchings from the Metropolitan Museum’s collection and other museums in the United States and abroad. The intimate scale of the exhibition and size of the works on display will illuminate the unique kinship that exists between the self-portraits created by Rembrandt van Rijn (1606-1669) and Edgar Degas (1834-1917) at the start of their illustrious careers.

The exhibition was organized by the Rijksmuseum, in association with The Metropolitan Museum of Art and the Sterling and Francine Clark Art Institute.

The Metropolitan Museum has enjoyed recent collaborations with both institutions, respectively: Miró: The Dutch Interiors with the Rijksmuseum (2010) and Impressionist and Early Modern Paintings: The Clark Brothers Collect with the Sterling and Francine Clark Art Institute (2007).

In the 19th century, appreciation for Rembrandt’s genius, which had wavered since his death, gained renewed popularity, particularly in France. By the 1850s, when Rembrandt enjoyed nearly cult-like status, Degas was seeking to establish his own artistic identity. Frustrated by the rigidity of the École des Beaux-Arts, in Paris, he quit school, setting off for Italy for three years of independent study to find his voice as an artist. During this pivotal period, Degas studied prints by Rembrandt in French and Italian collections, often copying them into his sketch books, and even developing one of them into an etching. These exercises gave way to a series of self-portraits in which Degas explored a range of tonal effects, from subtle shading to dramatic contrasts of light and dark, inspired by Rembrandt’s graphic invention.

This highly focused exhibition—not unlike the Metropolitan’s recent Cézanne’s Card Players in spring 2011—will afford a unique perspective on the Metropolitan Museum’s Degas Self-Portrait (ca. 1855-56) in oil and more than a dozen works on paper by the artists, including multiple states of etchings, which are rarely on view. It will also present a handful of works by contemporaries of Degas, such as Henri Fantin-Latour, to document that Degas was not alone in his admiration for Rembrandt. Anchored by works from the Metropolitan Museum’s distinguished Degas holdings (which are second only to the French National Museums) and from the Rijksmuseum, the exhibition will also feature key loans from the Sterling and Francine Clark Art Institute, the Bayerische Staatgëmaldesammlungen in Munich, The Getty Museum, the National Gallery of Art, Washington, and the Morgan Library & Museum.

The exhibition was previously on view at the Rijksmuseum in Amsterdam and at the Sterling and Francine Clark Art Institute in Williamstown, Massachusetts.

curated by Janet Bishop, curator of painting and sculpture at SFMOMA; Cécile Debray, curator of historical collections at the Musée National d'Art Moderne, Centre Pompidou, Paris; and Rebecca Rabinow, Curator in the Metropolitan Museum’s Department of Modern and Contemporary Art.

The Stein siblings—Gertrude, Leo, Michael, and his wife Sarah—were important patrons of modern art in Paris during the first decades of the 20th century. The Steins’ Saturday-evening salons introduced a generation of visitors to recent developments in art, particularly the work of their close friends Henri Matisse and Pablo Picasso, long before it was on view in museums. The Steins Collect: Matisse, Picasso, and the Parisian Avant-Garde—at The Metropolitan Museum of Art from February 28 through June 3, 2012—will unite some 200 works of art to demonstrate the significant impact the Steins’ patronage had on the artists of their day and the way in which the family disseminated a new standard of taste for modern art.

Beginning with the art that Leo Stein collected when he moved to Paris in early 1903—including paintings and prints by Paul Cézanne, Edgar Degas, Henri de Toulouse-Lautrec, Édouard Manet, and Auguste Renoir—the exhibition will trace the evolution of the Steins’ taste and examine the close relationships that formed between individual members of the family and their artist friends. While focusing on works by Matisse and Picasso, the exhibition will also include paintings, sculpture, and works on paper by Pierre Bonnard, Maurice Denis, Juan Gris, Marie Laurencin, Jacques Lipchitz, Henri Manguin, André Masson, Elie Nadelman, Francis Picabia, and others.

The exhibition is made possible by The Philip and Janice Levin Foundation and
the Janice H. Levin Fund.
Additional support provided by The Daniel and Estrellita Brodsky Foundation.
The exhibition was organized by The Metropolitan Museum of Art, New York, the San Francisco Museum of Modern Art, and the Réunion des Musées Nationaux-Grand Palais, Paris.
It is supported by an indemnity from the Federal Council on the Arts and the Humanities.

Highlights from the exhibition include Matisse’s Woman with a Hat (San Francisco Museum of Modern Art), purchased by Leo Stein from the famous “fauve” Salon d’Automne of 1905, and Picasso’s painting of Gertrude Stein (The Metropolitan Museum of Art), which will be presented alongside additional portraits of the Stein family by Matisse, Picasso, and Vallotton.

Life-size photographic enlargements of the Steins’ Parisian apartments will be displayed throughout the exhibition to show how the art was installed in the Steins’ residences. Additional themes covered in the exhibition include Sarah Stein’s role in the formation of the Académie Matisse, the influential art school that operated from 1908 to 1911; Sarah and Michael’s commission of a villa from Le Corbusier; and Gertrude’s later collaborations with Juan Gris, Élie Lascaux, Francis Rose, and Virgil Thomson.

The Steins Collect: Matisse, Picasso, and the Parisian Avant-Garde is organized by Janet Bishop, curator of painting and sculpture at SFMOMA; Cécile Debray, curator of historical collections at the Musée National d'Art Moderne, Centre Pompidou, Paris; and Rebecca Rabinow, Curator in the Metropolitan Museum’s Department of Modern and Contemporary Art.

The exhibition will be accompanied by a fully illustrated, 464-page catalogue edited by Janet Bishop, Cécile Debray, and Rebecca Rabinow. The publication features new research, previously unpublished archival information, and original essays by a range of French and American experts in the field: Isabel Alfandary, Janet Bishop, Emily Braun, Edward Burns, Cécile Debray, Claudine Grammont, Hélène Klein, Martha Lucy, Carrie Pilto, Rebecca Rabinow, and Gary Tinterow. The catalogue is published by SFMOMA in association with Yale University Press, and will be for sale in the Museum’s book shops (hardcover, $75).

The Museum will offer an array of education programs for this exhibition including films, a Sunday at the Met on April 29, a series of exhibition tours and thematic gallery talks, a teacher program, and a participatory teen program exploring connections between writing and art.

Education programs are made possible by The Georges Lurcy Charitable and Educational Trust.

Prior to its presentation at The Metropolitan Museum of Art, The Steins Collect has traveled to SFMOMA and to the Grand Palais, Paris.