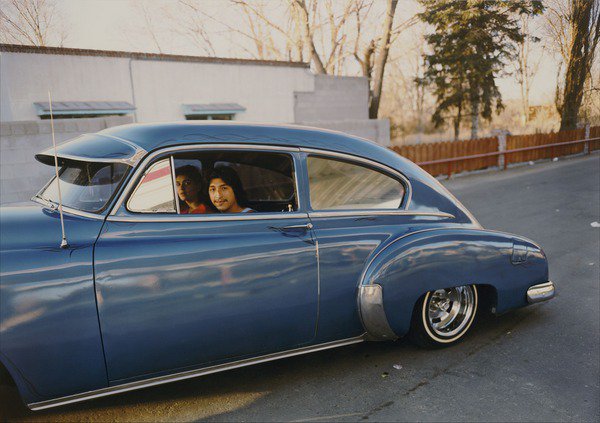 Photographs from renowned Bank of America Collection at IMMA

An exhibition of more than 100 photographs drawn from the renowned Bank of America Collection, opens to the public in Dublin at the Irish Museum of Modern Art on Wednesday 22 February 2012. Conversations: Photography from the Bank of America Collection documents the evolution of photography since the 1850s and presents some of the most notable photographers of the 19th and 20th-centuries. Hand-picked from thousands of photographs, the works are displayed so as to create “conversations” between images by individual artists and across a wide range of themes, including portraits, landscapes, street photography and abstraction.

The free exhibition presents works by some of photography’s most celebrated names, from 19th-century innovators Gustave Le Gray, Julia Margaret Cameron and Carleton Watkins, via 20th-century luminaries: Alfred Stieglitz, Harry Callahan, and Irving Penn, to contemporary image makers: William Eggleston, Thomas Ruff and Cindy Sherman. Modern works are juxtaposed with older works, European with American, and staged subjects with documentary images. These conversations create unique visual groupings, including images of visitors responding to art in museums, such as Thomas Struth’s Audience 4 (2004), which shows people gazing upward at Michelangelo’s statue of David at the Academia Gallery in Florence, and Musée du Louvre 4, Paris (1989), where visitors contemplate Théodore Géricault’s famous Raft of the Medusa in a Louvre gallery.

Commenting on the exhibition, Peter Keegan, Ireland Country Executive, Bank of America Merrill Lynch, said: “Bank of America Merrill Lynch is delighted to make this exhibition available to the public at IMMA, and we are extremely grateful for this unique opportunity to expand our long-term programme of arts support in Ireland with such a highly-respected museum. IMMA has a very impressive track record with photographic exhibitions, including Picturing New York in 2009-10 and Magnum Ireland in 2006. This also complements our other activities supporting the Arts in Ireland, including the restoration of Maclise’s iconic The Marriage of Strongbow and Aoife at the National Gallery of Ireland; The ‘New Stream’ programme with Business to Arts and the first display in Europe of the Bank’s Art Books of Henri Matisse at the Chester Beatty Library last year.”

Some of the most striking works in this exhibition focus on people and portraiture, Julia Margaret Cameron’s distinctive profile of her niece, Untitled (Mary Emily “May” Prinsep) (1870), is seen alongside Edward Weston’s portrait, Tina Modotti, Mexico (1924), which offers a compelling view of his sitter’s psychological state. Both images show women gazing downwards in compositions that are elegant and lyrical. Nevertheless, they are clearly women of different times: the Victorian Prinsep, although surprisingly candid for such an early photograph, is soft and demure, while Modotti, the modern woman, has allowed her photographer-lover to capture her emotional state at close quarters. Another group explores the uncanny in the everyday, as seen in William Eggleston’s iconic image of a tricycle, Untitled (Memphis) (about 1970), and Lee Friedlander’s T.V. in Hotel Room, Galax, Virginia (1962), which shows an eerily disembodied child’s face on a television screen.

Landscapes and seascapes are well represented in the exhibition, such as Alvin Langdon Coburn’s Snow in Canyon, Grand Canyon (1911) and Art Sinsabaugh’s Midwest Landscape #32 (1961). Both of these works explore the artistic possibilities of the American landscape in photography, from very different periods and perspectives.

The exhibition is also rich in street photography, including Helen Levitt’s New York (about 1940), an image of three children wearing Halloween masks on a tenement stoop, and Garry Winogrand’s World’s Fair, New York City (1964), a candid black and white photograph of a group of people, talking and gesturing on a bench, seemingly frozen in midsentence.

Historic monuments and travel to exotic locales are documented in several photographs, including Francis Frith’s documentary image, The Ramesseum of El-Kurneh, Thebes, Second View (1857–58), which captures the grandeur of ancient Egypt—a sight available only to a very few intrepid travelers in the mid-19th-century—and Richard Misrach’s Ticket Booth and Pyramid, Giza, Egypt (1989), which shows, in wry contrast, the modern tourist experience of these ancient sites.

Works of abstraction and experimentation also are on view. Light Abstraction (about 1924–25) illustrates Jaromir Funke’s use of soft focus that enabled him to create Cubist-inspired compositions out of everyday objects with light, shadow, and reflection. The blurring of subject matter is demonstrated in Thomas Ruff’s d.p.b. 08 (2000), in which he digitally manipulates the image creating a fusion of both architecture and landscape.

Bank of America’s critically acclaimed photography collection has its beginnings in the 1960s, when The Exchange National Bank of Chicago, a legacy Bank of America institution, acquired a diverse and particularly fine collection of photographs. Scholars Beaumont and Nancy Newhall, who were the foremost historians of photography at the time, were charged with the task of curating a photography collection for the bank. The images purchased by the Newhalls in 1968-69 form the nucleus of what is today a deep and wide-ranging collection spanning the full historical and technical range of the medium, from mid-19th-century salt prints to early 21st-century digital prints. Beaumont Newhall was the first curator of photography at The Museum of Modern Art in New York (MoMA), where he organised a landmark 1937 retrospective of photography’s first century, helping to establish its acceptance as a vital art form. Newhall later served as curator and director of the George Eastman House in Rochester, NY, and was a professor at the University of New Mexico, where he helped initiate the first doctoral program in the field. His wife, Nancy Newhall, took her husband’s place at MoMA during World War II, and was the author of numerous photography publications. The Newhalls’ connoisseurship, continued by the Bank of America’s subsequent curators, has resulted in an extraordinary collection of rare and varied works.

Bank of America’s Art Collection comprises a global assemblage of paintings, works on paper, video, photography, sculpture, textiles, and maps dating from the 18th-century to the present. Bank of America has chosen to share the Collection with the public via its dedicated loaning programme Art in our Communities ™. Peter Keegan said; “By providing these exhibitions and the support required to host them, Bank of America Merrill Lynch hopes to enrich communities both culturally and economically and help to generate vital revenue for museums. By the end of 2012, Bank of America Merrill Lynch will have loaned more than 50 exhibitions to museums worldwide.”

In 2009 an exhibition at IMMA of the work of the distinguished American artist Lynda Benglis was made possible by Bank of America Merrill Lynch. This partnership included the loan and subsequent donation to IMMA of Caelum, 1986, a Benglis sculpture from the bank’s corporate collection.

Rachael Thomas, Head of Exhibitions at IMMA, said: “We are delighted to be presenting a photography exhibition of such great diversity and distinction, here at the Irish Museum of Modern Art. Conversations celebrates the best of the history of photography and reflects all aspects of life from across the world, with brilliance and imagination”.

A full programme of talks and lectures is planned to coincide with the exhibition. Admission is free. See www.imma.ie/talksandlectures for more information.

Conversations: Photography from the Bank of America Collection is free of charge to the public and is made possible by the Bank of America Merrill Lynch Art in our Communities Programme™. The exhibition was originally curated by the Museum of Fine Arts, Boston, travelled to the Museo del Novecento in Milan, and has now been re-interpreted by the Irish Museum of Modern Art.

The exhibition is curated by Mary Cremin, Project Curator: Exhibitions, IMMA, and is accompanied by a full-colour catalogue with texts by Enrique Juncosa, former Director of IMMA; Rena De-Sisto, Global Art and Culture Executive, Bank of America Merrill Lynch; Matthew S Witkovsky, Curator and Chair, Department of Photography, The Art Institute of Chicago; Anne Havinga, the Estrellita and Yousuf Karsh Senior Curator of Photographs, Museum of Fine Arts, Boston; Karen E Haas, the Lane Collection Curator of Photographs, MFA, Boston, and Mary Cremin. The publication provides a valuable insight into the history of the Collection and the development of photography over time. Price €25.00.

Conversations: Photography from the Bank of America Collection continues until 20 May 2012.