David Zink Yi: the video installation Horror Vacui as well as photographs from the series Twilight Images. The pictures show a public park in Havana at night; the site the artist chose is significant with regard to his field research. Allan Kaprow has realized over 250 happenings, including 'Time Pieces' (1973). The work shows the participants as they are recording sounds of their pulses and breathing, listening to them, and exchanging them with partners over the telephone and face-to-face. 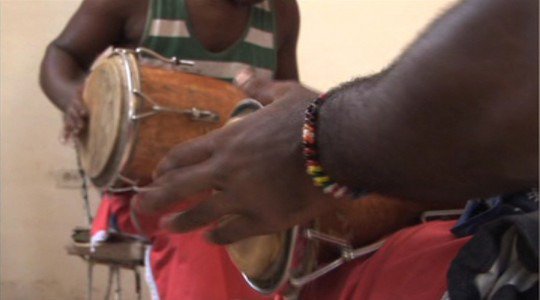 David Zink Yi (b. 1973) is one of the most successful artists of his generation. After graduating from the master class of Lothar Baumgarten at the Universität der Künste Berlin (2003), he was awarded the Schmidt-Rottluff scholarship, the Ars-Viva Prize (both in 2004) and the MAK-Schindler scholarship (2005). His works are represented in public and private collections around the world, including Museum Ludwig, Cologne, Museum of Contemporary Art, Los Angeles and Museo de Arte, Lima. After numerous international solo and group exhibitions, the exhibition at Neuer Berliner Kunstverein is the first of its kind in a German institution.

The exhibition at the Neuer Berliner Kunstverein is premiering the video installation Horror Vacui (2009) in Berlin, as well as a new series of photographs from the series Twilight Images. The pictures, gelatin silver prints on baryta paper, show a public park in Havana at night. The site the artist chose is significant with regard to his field research; different themes and areas of interest in Zink Yi’s work intersect in the portrait of Havana: the utopian visions of social revolutionaries, the stark reality of socialism, the cults and rites of the Afro-Cuban population. The black-and-white time exposures document a subtle play of light, a twilight heightened by the presentation in the exhibition space. The photographs are set into recesses of identical size, which are integrated into the exhibition architecture and presented in such a fashion that natural as well as artificial light shines through them, revealing, depending on its intensity, a wide variety of structures and shadings within the picture. As the lighting conditions change, the pictorial space changes accordingly.

The centerpiece of the exhibition at the Neuer Berliner Kunstverein as well as the artist’s book published with it is the two-channel video installation Horror Vacui. The work, which runs for two hours, documents rehearsals of the Latin band De Adentro y Afuera, founded by Zink Yi together with Cuban musicians, and combines these pictures with footage showing rituals rooted in Afro-Cuban culture: the three ceremonies known as Cajon, Tambor Batá, and Wiro from Palo Monte, an Afro-Cuban cult related to Santería and the religion of the Yoruba, which is practiced primarily in Nigeria and Benin and is at the root of a range of religious traditions in several countries of the Americas. By juxtaposing the band rehearsals and the ritual practices as equipollent elements in his video, Zink Yi examines the structural similarities between music-making and religious performance. The key to this semblance is that both think the emerging musical space as a collective plethora, a polyrhythm made possible by the rhythmical structure of the clave that pervades the entire piece. The interval-like structure of the clave are opening up ways for the musicians to find “empty moments” in the composition of a piece they build together, which they may complement and fill individually. The polyrhythm gives rise to a timeless and spaceless sonic body, putting the bodies into a trance in the music as well as in the rituals. Zink Yi’s Horror Vacui sheds light on practices that allow individual and collective identities to emerge outside of models that assert identity by means of aggressive oppositions. The artist highlights alternatives to restrictive notions of cultural identity built on relations of power and inferiority.

Book Series “n.b.k. Exhibitions”
On the occasion of the 2011 advancement award “Catalogs for Young Artists” given to David Zink Yi by the Alfried Krupp von Bohlen und Halbach-Stiftung a comprehensive publication will be issued, which Zink Yi projected as an artist’s book. The photo double volume, comprising making-of material and photographs of Horror Vacui, as well as a text insert with contributions by Marius Babias, Kathrin Becker, Diedrich Diederichsen, Sophie Goltz and David Zink Yi, is published by Buchhandlung Walther König, Köln 2012, German / English, both 232 pages.

Allan Kaprow (1927-2006) as an artist and art theorist worked on the development of improvised forms of performance art, and in 1958 coined the term “Happening”. He has realized over 250 happenings, including Time Pieces for the n.b.k. project ADA—Actions of the Avant-garde I (1973). The video Time Pieces is a co-production with the Video-Forum of the Neuer Berliner Kunstverein. The work shows the participants as they are recording sounds of their pulses and breathing, listening to them, and exchanging them with partners over the telephone and face-to-face. The unique Berlin tape of the premiere of Time Pieces was digitally remastered in 2011, to celebrate the 40th anniversary of Video-Forum and for the first time, is now on view in the n.b.k. Showroom in this new version. This presentation exemplifies, that the Video-Forum, apart from its activity of collecting, co-producing and mediating, is also entrusted with the digital restoration and archiving of video art.