"The Studio. Places of Production" As art changes, so the places where art is produced change too. Taking works from the collection as their startingpoint, the exhibition provides a glimpse into contemporary art production. Even without being a participant in Katerina Seda's actions, her dream can be comprehended. Her seriousness and tirelessness are also translated into the exhibition "Talk to the sky 'cause the ground ain't listening". 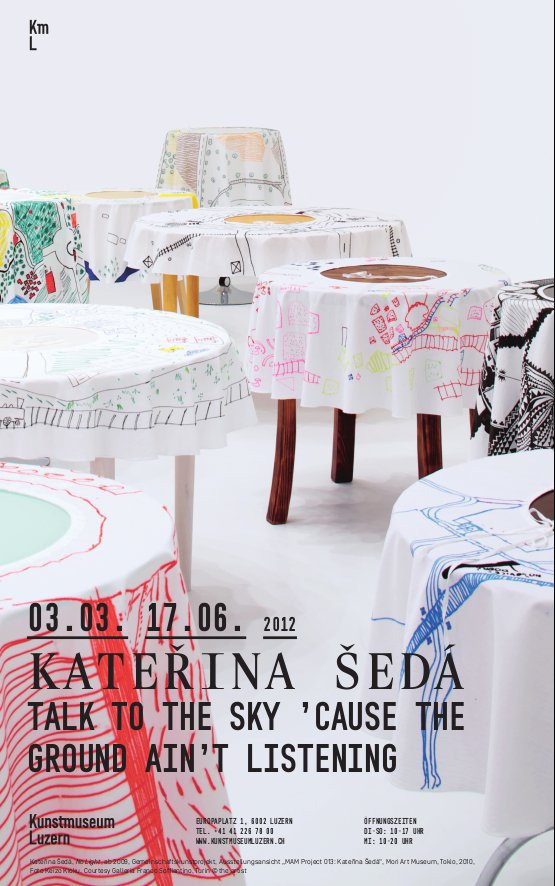 The Studio. Places of Production

The studio is a magical place where works of art are produced from materials. As art changes, so the places where art is produced change too. Taking works from the collection as their startingpoint, the exhibition provides a glimpse into contemporary art production. Art today can be produced anywhere.

In the 1970s, artists came up with new working methods and thus extended the traditional concept of art. Hand in hand with this went an expansion of the range of places where they created their work. Ana Mendieta worked directly with her body, in the open countryside. Doing artistic work is a thought process first and foremost. The photograph Das Atelier by Balthasar Burkard/Markus Raetz shows this starting point of creativity as an undisguised place of thought. It is in fact Markus Raetz’s then studio in Amsterdam, which was emptied for the photograph.
The works of Heidi Bucher and Hannah Villiger also take as their subject the place where their art is produced. Heidi Bucher made a copy of the door of her studio in Lanzarote out of latex. The latex layer, pulled off like a skin for the making of the piece, is presented as a painting, with colour and materiality conveying a certain physical quality.
In her photographic work, which shows the view from the window of her last studio over theroofs of Paris, Hannah Villiger recalls one of the first famous photographs that Joseph Nicéphore Nièpce took in 1826 from his studio across the roofs of Le Gras.

The history of the studio in visual art is rich and diverse, and extends far back in time. As a historical example, this room shows works by a classical studio artist: Félix Vallotton’s studio was a real prop room with objects that reappear repeatedly as accessories in his interiors and still lifes. He provided the professional models that he used for his portraits and nudes with scarves or paraphernalia from his supply. Thus, for example, the same typical yellow books constantly reappear. They were editions of the magazine Mercure de France in which Vallotton regularly published illustrations. The artist’s self-portrait, showing him in the role of a welldressed bourgeois, also shows the closed studio door. It refers to the idea of the studio as a closed-off cell, a place of withdrawal, concentration and self-reflection.

In the work of Michael Beutler the studio and the exhibition space are identical. All his installations are produced on site. The particular qualities of the source material used, the specially produced working machines as well as the special conditions determine the working process. With the help of a group of colleagues, the artist finally develops the arrangement for the specific situation of the exhibition. After the exhibition closes, the machines remain, along with instructions that mean they can be redeployed. As a result, not only are the place of production and presentation identical, the art-work itself is in fact a working process that is remade on every new occasion. Michael Beutler has developed a new work specially for Lucerne.

Kateřina Šedá is interested in communities. Her projects are never primarily aimed at producing artworks. The artist is much more concerned with the actions which she generally performs with inhabitants from Czech provinces, and whose goal is to produce a sense of belonging, responsibility towards the community and identification with home. Failure isn’t a possibility. The artist pursues her projects until she has successfully achieved her intention. One good example of this is her collaboration with the population of the little Czech village of Nošovice for the project Nedá se svítit, which constitutes the frame of the Lucerne exhibition. The title "Talk to the sky ’cause the ground ain’t listening" is one of a hundred translations of the Czech proverb that gives the work its title. For each stage and further development of Nedá se svítit, Kateřina Šedá chooses a different translation. So the project has already been seen in Tokyo under the title No Light, as That’s the Way the Cookie Crumbles in London, and now, in Lucerne, as Talk to the sky ’cause the ground ain’t listening.
The initial situation Nedá se svítit was that the local municipality had changed 300 hectares of fields in Nošovice into an industrial development zone and the regional authority wanted to assign them to a Korean car manufacturer. The yearlong tension between the individual interests led and the villagers being at odds with each other. In the end everyone gave in and sold the land. Many inhabitants moved away after the factory was build and those remaining have not spoken with each other since. The new geography of the village added to the conflict and became an additional obstacle on the way of rebuilding the community spirit. The factory in the middle of fields caused the people to live in a circle around it. The original paths that used to connect them ended up at the factories fences. In order to use this circle pattern to make the inhabitants connect with each other again, Kateřina Šedá gave the villagers the task of imagining standing on the premises of the car factory and painting everything they see around it. The resulting paintings were then embroidered by women from Nošovice onto tablecloths, which were presented on round tables in the exhibition. The round tables ensured not only accessibility from all sides, but also symbolize the common table that Kateřina Šedá wants the villagers to share again. From the original installation with tablecloths the project has come a long way: the hole on the middle of the tables was filled with fake food and tableware, a model of the car factory has been produced, and the tablecloths have been transformed into skirts and scarves.

Kateřina Šedá usually works with people from her Czech homeland. But her themes are by no means specifically Czech. The problem of increasing individualization and atomization is globally apparent. But Kateřina Šedá believes that no one is born in a place by chance, and that home also means responsibility towards one’s own origins. Admittedly, her humorous actions may often look like Czech fairy-tales, but Kateřina Šedá isn’t concerned with nostalgic narratives. She’s serious: it’s a matter of creating a better life. Sometimes you have to address the sky directly, demand the highest ideals if incomprehension and ignorance rule on the ground. Even without being a participant in Kateřina Šedá’s actions, her dream can be comprehended. Her seriousness and tirelessness are also translated into the exhibition. Talk to the sky ’cause the ground ain’t listening.

Kateřina Šedá was born in 1977 in Brno-Líšeň, where she also lives and works today.

Closing event
Sunday, 17 06, 11 am
Performance Líšeň Profile by the artist Kateřina Šedá with Czech guests from Líšeň-Brno in German
Joseph Šedỳ is the face of his home town, Líšeň, and represents the suburb of Brno at official occasions. This came about because Kateřina Šedá was looking for a specific characteristic of this rather impersonal place. She was struck that the skyline of Líšeň looks like a human profile, the church tower forming the nose. Thinking that the real picture of people is lodged in the landscape or the environment around them, she wanted to answer the question: What does the typical resident of Líšeň look like? She organized investigators from all over the Czech Republic, as she figured that this task could only be completed by people with an objective, outside point of view. The investigators travelled to Líšeň to find one person that most resembles the city’s skyline, and convince him or her to have his/her portrait drawn. These thousand drawings were collected in a book from which the locals would choose Mister or Miss Líšeň. That the honour went to Kateřina Šedá‘s father is pure coincidence.