You Are Still Here. 30 works dating from 90's to the present. Hatoum has also spent some time in Istanbul producing a number of new pieces for the exhibition in collaboration with local fabricators and craft workshops 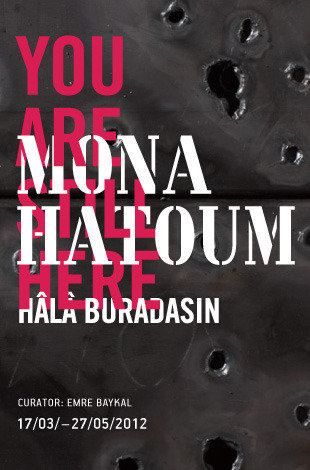 Arter is hosting Mona Hatoum's first solo exhibition in Istanbul between 17 March and 27 May 2012. Entitled "You Are Still Here", the exhibition presents more than 30 works dating from 90's to the present. Hatoum has also spent some time in Istanbul producing a number of new pieces for the exhibition in collaboration with local fabricators and craft workshops.

Hatoum's poetic and political oeuvre is realised in a diverse and often unconventional range of media, including installations, sculpture, video, photography and works on paper. In her work she has determinedly explored a sense of the malaise and unsettledness that permeates our contemporary world.

"You Are Still Here" focuses on the last two decades of Hatoum's artistic production and aims at making quotations from Hatoum's oeuvre dedicated to a persistent investigation of a broad range of issues related to home and displacement, closeness and distance, loss and separation, surveillance and regimentation by institutional power structures, the endangered and violated human body.

Mona Hatoum was born into a Palestinian family in Beirut, Lebanon in 1952 and now lives and works in London and Berlin. She has participated in numerous important group exhibitions including The Turner Prize (1995), Venice Biennale (1995 and 2005), İstanbul Biennial (1995 and 2011) Documenta XI, Kassel (2002) and Biennale of Sydney (2006). Solo exhibitions include Centre Pompidou, Paris (1994), Museum of Contemporary Art, Chicago (1997), Tate Britain, London (2000), Hamburger Kunsthalle, Kunstmuseum Bonn, Magasin 3, Stockholm (2004) and Museum of Contemporary Art, Sydney (2005). Recent exhibitions include Interior Landscape, Fondazione Querini Stampalia, Venice (2009), Witness, Beirut Art Center, Beirut (2010). She is currently the subject of a solo exhibition at Sammlung Goetz in Munich. Hatoum has been awarded the prestigious 2011 Joan Miró Prize and a solo exhibition of her work will be held at Fundació Joan Miró in Barcelona in June 2012.