An exhibition of sculpture by game-changers of post-war American art John Chamberlain, Robert Rauschenberg, and Cy Twombly, together with recent work by the irrepressible Austrian sculptor Franz West. Each of these artists, in ways befitting their respective contexts, has sought inspiration from found materials and everyday life. 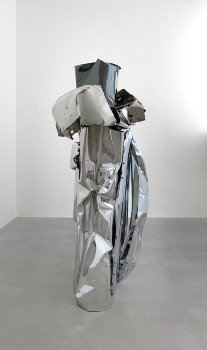 Gagosian Gallery Hong Kong is pleased to present an exhibition of sculpture by game-changers of post-war American art John Chamberlain, Robert Rauschenberg, and Cy Twombly, together with recent work by the irrepressible Austrian sculptor Franz West. Each of these artists, in ways befitting their respective contexts, has sought inspiration from found materials and everyday life.

One of the most inventive artists in post-war American art, Rauschenberg worked in “the gap between life and art” to develop an altogether new visual language based on collage as a microcosm of the larger, messy world. Walking the streets of New York, he picked up trash and discarded objects that interested him, integrating them into bold paintings or assembling freestanding sculptures. These he called, simply yet paradigmatically, “combines.” The Gluts series (1986–95) are a direct comment on surplus in the 1980s Texan oil market as well as the widely fabled material greed and excess of the era. Exploring the reflective, textural, sculptural, and thematic possibilities of road signs and scrap automobile parts he assembled wall reliefs such as Bumper Slip Late Summer Glut (1987) and Splice Early Winter Glut (1987). Thus transformed into powerful aesthetic objects, these junkyard relics yet retain some of their original, non-abstract identity. Hoax Summer Glut (1987), a rare freestanding sculpture of the primarily wall-based series, proposes a more overt narrative with a battered construction helmet, and a dramatically balanced swathe of industrial mesh.

Rauschenberg’s friend and sometime collaborator Twombly began making sculptures in 1946. In contrast to the gritty exuberance of Rauschenberg’s sculptures, his bricolages are rather more austere and elegiac. Taking humble materials and found objects, he coated them in chalky white gesso, producing totemic sculptures possessed of an almost archaeological beauty, with a refined play between fragility and obduracy, ancient and modern, epic and everyday. In 1979 Twombly began casting some of these bricolages in bronze, thus transforming and preserving the tenuous forms into cohesive and more robust wholes. While discrete sculptural elements are often partially merged and abstracted by the casting process, in the vertical Untitled (2004–09) each remains clearly visible; a broom inside a funnel resting on a cylindrical pedestal.

Chamberlain’s muscular sculptures, which he began making in the 1950s, are constructed from discarded automobile-body parts and other modern industrial detritus. His emphasis on discovered or spontaneous correlations between materials, rather than a prescribed idea of composition, often prompted descriptions of his work as three-dimensional Abstract Expressionist paintings. They boldly contrast the everyday industrial origin of materials with a cumulative formal beauty that is often underscored by the given paint finish of the constituents. Chamberlain’s process of construction has its roots in industrial fabrication, given that mechanical car crushers imparted preliminary form to the raw material, which was then further manipulated in the sculptural process. Crumpling, crushing, bending, twisting, painting, and welding the metals to form individual objects, which may then have been further sprayed, Chamberlain combined elements into aggregations, often on a monumental scale, reaching new heights in TALKSHOWAMBLE (2009), GOOSECAKEWALK (2009), and EMPIREMICROPHONE (2009) in which twisted ribbons of steel, all taken from mid-century American and European cars, provide a lively formal discourse on mass, space, volume, openness, weight, and material.

Belonging to the generation of artists exposed to Actionist and Performance Art of the 1960s and 1970s, West instinctively rejected the traditionally passive nature of the relationship between artwork and viewer. He explores sculpture in terms of spirited and generous interaction between viewers and objects in any given space. His amorphous yet highly endearing sculptures transform neutral spaces into sociable aesthetic environments while his furniture designs and subversive collages further challenge the boundaries between art and life. With Divan (2004), a fully functional piece of furniture, he bucks convention by inviting the public not only to view his art but to physically engage with it. A pair of untitled papier-mâché sculptures (2011), like two multi-colored boulders or abstract heads, teeter on spindly metal supports. Such affable "anti-sculptures" reject notions of the sublime and the monumental, instead offering more engagement that borders on the comedic. Finally, two colorful untitled models for large-scale sculptures (2009) are presented in vitrines, complete with scaled human figures.

Robert Rauschenberg was born in 1925, in Port Arthur, Texas and died on Captiva Island, Florida in 2008. He has been the subject of numerous exhibitions worldwide including “Robert Rauschenberg: A Retrospective,” the Solomon R. Guggenheim Museum, New York (1997) (traveled to the Menil Collection, Contemporary Arts Museum and Museum of Fine Arts, Houston; the Museum Ludwig, Cologne and the Guggenheim Museum, Bilbao, through 1999); “Combines,” the Metropolitan Museum of Art, New York (2005, traveled to the Museum of Contemporary Art, Los Angeles, Centre Pompidou, Paris, and Moderna Museet, Stockholm, through 2007); and “Gluts,” the Peggy Guggenheim Collection, Venice (2009, traveled to the Guggenheim Museum Bilbao, Tinguely Museum, Basel, and Villa e Collezione Panza, Varese, through 2010).