Deadpan. His creative process involves restraint - the artist avoids drawing any image of interest for as long as possible to allow ideas and pictures to build (and subtract) inside one's imagination. 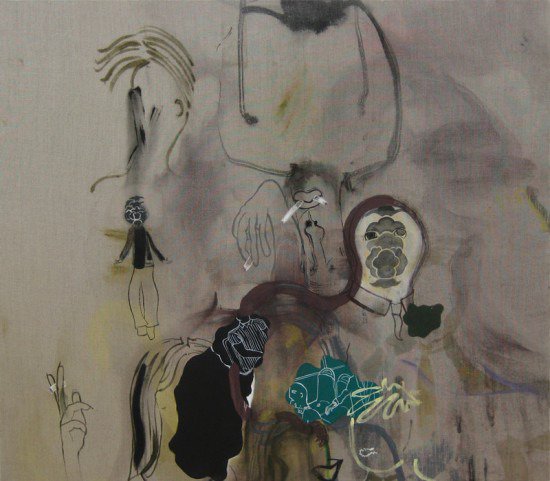 Ana Cristea Gallery is pleased to present "Deadpan”, the first solo exhibition in the United Stated by London- based artist Nick Nowicki."

Nowicki creates images based on personal observations. With simple lines varying in width and intensity and barely readable human expressions, the images appear like doodles, one drawing on top of the other on traditional art materials - paper, linen, and cotton. A longer look at his work reveals that the artist is challenging the viewer to re-examine every day human activities. Nowicki's creative process involves restraint - the artist avoids drawing any image of interest for as long as possible to allow ideas and pictures to build (and subtract) inside one’s imagination. The first evident stroke represents the distillation of an editing process akin to writing - but unlike a novel, the narrative in these artworks remains elusive. The figures have no faces, their eyes are closed, and the mouths are large open circles. The facial expressions are beyond reach. The people sharing the space on the canvasses are just barely relating or simply strangers brought together by the artist and his conscious method of layering.

The great open-ness of the backgrounds and pared-down atmospheres in Nowicki canvasses create a sense of air and breath, albeit toxic ashen smoker's breath. Smokers appear often in Nowicki’s work. The smoke functions like the bubbles in comic strips and sequential art only they contain no words or clear messages. Through the smoke, the figures in the paintings are able at least to reach one another. In that manner, the artist is posing fundamental humanist questions - Who are these people? What is happening in that world?

In "Tipping Point" outlines of individual figures overlap with one another suggesting human contact and communication. The title hints at the artist's notion that this claustrophobic gathering could turn into a real party or head imminently into disaster. The fingers that are used to make gestures in the animated conversations or share a cigarette seem poised to flip the viewer the middle finger and scatter the partygoers. When these figures are not alone moving through everyday circumstances, they are trapped behind a window we cannot see as in "Armrest." The comfort of the nearby armrest of the sofa remains out-of-reach. That the armrest looks like the sinister fingers in so much of Nowicki's drawings or the cigarette that burns the mouth of another in "I'm Not Having That" or even simply clothespins that secure and pinch, the picture provides no relief or even visual comfort. The window makes it impossible to hear them; we cannot rescue or comfort these people.

The meaning of the scenarios depicted by Nowicki remains unsatisfied so that the viewer is left to ponder these familiar situations in the context of their own lives - the way humor often throws the best light on a truth not quite speakable within a particular family or even a group of work colleagues at the daily grind. Nowicki’s works initiate an imaginary conversation between artist and the viewer through absence and intentional ambiguity where the blanks remain to be filled with any number of possible endings. Exhibited together, the larger works with their loose borders appear like laundry strung out to dry, ink blots that prompt individual, personal interpretations.